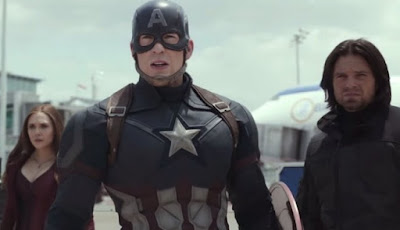 I would say that a film featuring superheroes doing battle with each other is a can't lose proposition but, as one film has already shown and (if early reviews are to be believed) another is about to show, it takes more than simply throwing a couple of popular characters into the ring and having them trade punches to make a satisfactory story. With Captain America: Civil War, Marvel continues to extend its tradition of success, creating a film that is wildly entertaining while also building on the narrative established in the previous films and setting up storylines for future films. As a film in its own right and as a piece in the ever-growing Marvel universe puzzle, it's a success, which is all the more impressive when you consider that the plan crafted by its villain doesn't really make any sense, unless you think relying on a series of fortunate coincidences constitutes a solid "plan."

Captain America: Civil War opens about a year after the events of Age of Ultron with a small Avengers team consisting of Steve Rogers (Chris Evans), Natasha Romanoff (Scarlett Johansson), Sam Wilson (Anthony Mackie), and Wanda Maximoff (Elizabeth Olsen) on a mission in Lagos to stop Crossbones (Frank Grillo) from stealing a biological weapon. Things go sideways, resulting in Crossbones detonating a bomb which Maximoff inadvertently directs into a building, killing several civilians. In the aftermath, people begin to call for the Avengers to be brought to heel and placed under the auspices of a governing body, an argument which quickly gains the support of Tony Stark (Robert Downey, Jr.). Stark's position is informed by the guilt he feels over the destruction caused in Age of Ultron, whereas Rogers' immediate opposition to the idea is informed by his experiences in The Winter Soldier, in which he discovered that Hydra had infiltrated S.H.I.E.L.D., the result of which was that he, and others, had been unwittingly working for the enemy. The two men quickly find themselves at a standoff, which quickly escalates when the Winter Soldier (Sebastian Stan) reemerges from hiding in order to set off a bomb at a UN Conference. Unwilling to let his former friend be killed on sight, Rogers decides to go after him himself, putting him at odds with the Sokovia Accords, which Stark has agreed to adhere to and which would give the Avengers the power to act only with the oversight of a special UN panel.

After locating Bucky, Rogers goes on the run with him, supported by Wilson and Maximoff, as well as Clint Barton (Jeremy Renner) and Scott Lang (Paul Rudd), while Stark pursues them with the support of Romaoff, James Rhodes (Don Cheadle), Vision (Paul Bettany), and new recruits Peter Parker (Tom Holland), and T'Challa (Chadwick Boseman), whose father was killed in the UN bombing. The line having been drawn, the two groups do battle with each other, unaware that they're playing directly into the hands of Helmut Zemo (Daniel Bruhl). A former Sokovian Colonel, Zemo's goal, supposedly, is to flush the Winter Soldier out of hiding and get some one-on-one time with him in order to activate him using the brainwashing code created by Hydra and learn the location of several Hydra-created super soldiers who have been cryogenically frozen so that, one assumes, he can turn them into his own personal terrorist army. Keeping Bucky alive, then, becomes not just a personal matter for Rogers, but a matter of global importance, and one which will bring him and Stark into direct and violent conflict with each other.

Since Civil War has now been out for two weekends and grossed almost a billion dollars worldwide, I'm going to assume that everyone has seen it and that it's fine to engage in spoilers to examine why Zemo's plan doesn't make sense. Let's break this down: Zemo's family was killed during the events of Age of Ultron, for which he has vowed revenge by destroying the Avengers. As part of that plan, he tracks down and kills the man who possesses the book which contains the code Hydra uses to activate the Winter Soldier. He poses as the Winter Soldier to detonate a bomb at the UN meeting in order to force the actual Winter Soldier out of hiding. He murders and then takes the place of a psychiatrist who will interview the Winter Solider once he has been apprehended by the authorities, disables the security long enough to use the code to activate him and then question him about the location of Hydra's other super-soldiers, but instead of activating those soldiers, he kills them because his plan was merely to reveal to Stark that his parents were murdered by the Winter Soldier and that Rogers knew it, leading to a conflict that will tear the Avengers organization apart in such a way that it may never recover. This is a plan that, a) assumes that Zemo is somehow aware that the Winter Solider is Bucky Barnes and that Barnes was a friend of Rogers' and that Rogers would try to protect him from Stark, b) that Barnes would be taken alive so that Zemo could have some one-on-one time with him, a fairly big gamble considering the immediate reaction of the government is to kill him on sight because he's so dangerous, and c) that Stark would be able to discover where Rogers and Barnes have gone and follow them there so that the climatic battle could take place. Not only is this a plan that hinges almost entirely on chance, it's totally unnecessary. If the goal all along was to show Stark the video and send him into a murderous rage against Bucky, then why not just... send him the video? Maybe via this thing called email? Or maybe just broadcast it on the internet for everyone to see? For a man who manages to outsmart everyone else in the movie, Zemo sure takes the long road towards a close destination.

But, really, none of that matters because Marvel has worked itself to a place where it can propel its stories almost entirely on the strength of its characters rather than on plot. Although it is packed with characters and works as an introduction to Black Panther and a re-introduction to Spider-Man, and is pretty busy with action setpieces, Civil War is able to slow things down just enough to establish clear motivations for the characters to take the positions that they take. It's easy to understand why Stark supports signing the Sokovia Accords, and it's easy to understand why Rogers does not, and neither man is necessarily totally right in his position. Being a Captain America movie, the screenplay leans more to Rogers' side than not, but while Rogers' argument that the Avengers shouldn't be in a position where a group which may have selfish or self-preserving motives for holding them back from taking action (an argument which I think is proved by the fact that the proposed oversight organization would be the UN, a group which has at times shown itself to be at the mercy of the interests of its most powerful members) is sound, so is Stark's argument that there needs to be some level of oversight. Stark, in fact, proves his own argument when he decides to kill Bucky for revenge. The amount of power that people like Stark and Rogers have is dangerous in combination with human emotion, which can be volatile and obscure reason.

Given that the genre tends to treat characterization as secondary to the action, it's to Marvel's credit that they've put so much care and effort into developing their characters while also managing to deliver some very entertaining action. The big sequence is, of course, the one teased in all the ads, where the two teams face-off, which goes on for quite some time without ever wearing out its welcome thanks to the players involved and the amount of humor mixed into the proceedings. Other great sequences feature a chase between the Winter Soldier, Captain America, and Black Panther, as well as the climactic fight between Captain America, Iron Man, and the Winter Soldier, both of which are deftly unfolded and memorable. There's a lot (a lot) going on at any given moment of Civil War and though it maybe feels just a little over-stuffed at times, it's certainly never boring. The 2016 summer movie season has technically only just started, but Civil War may very well prove to be its peak.
Posted by Norma Desmond at 8:00 AM

Nice review. After second viewing, I was considering Civil War as my fav Marvel film to date, based off the fantastic intro of Spider-Man into their universe (fav Marvel character). But in comparison, Joss Whedon's first Avengers film did everything better with the Hulk. As a secondary character to some of the leads (similar to Spidy), every scene he was featured in is compelling, entertaining, and funny.