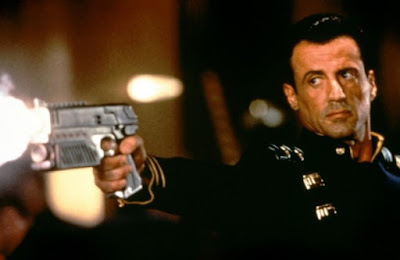 Here's the situation: you're making a movie with one of the biggest names in Hollywood, who was one of the greatest box office draws of the early to mid-80s, even if most of those hits came from entries in the same two franchises. He's been on a bit of a losing streak lately, having failed to broaden his appeal by branching into comedy, and even the action movies that are his bread and butter have lately failed to set the world on fire, though in the midst of this he's also had one bona fide hit that shows there may still be some life in his career. The movie you're making is based on a comic strip that, in North America at least, is fairly obscure and whose best known element is the distinctive look for the character, who wears a helmet that obscures half his face. Here's the question: do you accept that, by choosing obscure material, you're making a film that will likely have limited appeal and hew faithfully to the source material so that it will be embraced, at least, by fans of the comic and perhaps became a cult favorite that makes most of its money from video/DVD; or do you try to force the material into a star vehicle, stripping away anything weird or unique (including that helmet, which the character will only wear for about five minutes) until the work is as generically like everything else in the star's CV as possible? It's Hollywood. If they'd gone with the first option, we wouldn't be here.

Set in the future, after the Earth has become a mostly uninhabitable wasteland, what remains of humanity is crowded into mega-cities where crime is fought by Judges, a corps of men and women who have the authority to act as police officer, judge, jury, and, if the crime calls for it, executioner. One of the legendary Judges of Mega-City One is Judge Dredd (Sylvester Stallone), who is so dedicated to his work and so emotionless in his performance of it, that he may very well be more robot than man. When Rico (Armand Assante), a former Judge, escapes from captivity and frames Dredd for a murder, Dredd is saved from execution only by the intervention of his mentor, Chief Justice Fargo (an extremely over-qualified Max von Sydow), and is sentenced to life imprisonment instead. He escapes, however, when the craft transporting him and other prisoners, including the hapless Herman (Rob Schneider), to the penal colony is shot down, giving him the opportunity to get back into Mega-City One and prove his innocence. Meanwhile, the city has descended into chaos as Rico begins assassinating Judges while his benefactor, Judge Griffin (Jurgen Prochnow), plots to use the crime spree to force the Council Judges to agree to reactivate the defunct Janus Project, which attempted to genetically engineer Judges and was disbanded some time ago. With the help of Herman and Judge Hershey (Diane Lane), Dredd must stop Rico and Judge Griffin before they can bring their plan to fruition.

There are a lot of reasons by Judge Dredd doesn't work, but the most glaring is the problem with the film's tone and execution. Judge Dredd resembles nothing so much as a live-action version of the sort of films that The Simpsons' Rainier Wolfcastle is shown to star in. Tell me you can read this sample of the film's dialogue without hearing the perfectly-calibrated-for-scenery-chewing voice of Wolfcastle:

This is hilarious, and yet the film takes it seriously, which is all the more perverse when you consider that at this moment Dredd is in his uniform, which includes a giant, prominent, plastic codpiece. Judge Dredd is trying so hard to be serious (and if you doubt that it was meant to be serious, consider that in an interview years after the fact Stallone said of the film's failure, "We shouldn't have tried to make it Hamlet."), and yet is so naturally ridiculous and campy that there are moments when the film plays as if it's a parody of itself.

Judge Dredd is ultimately a film at war with itself, unable to find a consistent tone, unable even to decide what kind of movie it wants to be, trying at various times to be a science fiction story, a buddy cop story (with the buddies ultimately the humorless Dredd and rookie Hershey, or humorless Dredd and trying very hard at humor Herman), and, briefly, a western. It also tries, in the shallowest possible way, to be a psychological tale of a man's struggle with himself and his own morality and humanity. From the beginning the film is set up to ultimately be the story of how Judge Dredd learns to have feelings. In the beginning, his cold detachment is seen as an asset, something which allows him to mow fearlessly through bad guys and carry out executions without hesitation, his absence of emotion questioned only by Hershey, because she's "the girl" and therefore the only one for whom emotion registers. She's also the only one able to crack Dredd's gruff exterior and get him to admit that at one time he did kind of, sort of, feel something when he found himself in the position of having to Judge a friend (no points for guessing who that might be). But there's a reason why Dredd doesn't feel things, and that's that he is the result of the original Janus Project, and thus the big finale involves not just action, but Dredd grappling with how he came into the world and what being a clone means to his already thin sense of humanity. This gets resolved with all the customary exploding action that the genre calls for (from inside the Statue of Liberty, no less), but the funny thing about it is that, despite the story building to and turning on Dredd's discovery on his own nature, in the end the film simply circles everyone back to where they started. Dredd is cleared of murder and returns to being a Judge, rejecting the opportunity to become the new Chief Justice so that he can stay on the street maintaining law and order. The film might make some weak attempts at touching on big questions of the who polices the police variety, but its simple return to the status quo exposes how little the film is actually interested in being about anything at all.

Judge Dredd is a failure as a film, thoroughly lacking as it is in any clear goal as a story or motivation for existing, but more than that it represents an utter lack of imagination. It has no interest in expanding on, or even actually exploring, the world created by the comic and instead uses the setting as little more than window dressing so that the film ends up being nothing more than an ordinary Stallone action movie, undistinguished by anything like personality. Even in comparison to other ill-conceived science fiction action movies starring Stallone, Judge Dredd falls way short, as a film like Demolition Man can at least boast a flashy villain in Wesley Snipes and a spunky sidekick performance from Sandra Bullock, whereas this one has to make due with a bored Assante and poor Lane, trying her best to invest herself in a character whose purpose is to help Stallone's robotic protagonist get in touch with his feelings (a responsibility that brings to mind that line from Galaxy Quest: "I have one job on this lousy ship. It's stupid, but I'm gonna do it."). The only worthwhile thing to come out of the film is the iconic line, "I am the law!" delivered in Stallone's distinct, semi-unintelligible drawl.


Should It Have Been A Blockbuster?: Yeah, no, it's pretty terrible and pointless
Posted by Norma Desmond at 8:00 AM

I totally agree with this review. Judge Dredd is just a complete mess of a film and you gave all the reasons why. Great job!

Thanks! If nothing else, it's made me curious to see what the 2012 adaptation does with the material.