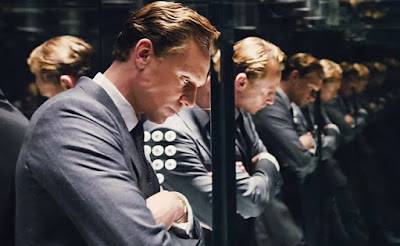 Ben Wheatley's take on J.G. Ballard's High-Rise comes so very close to working that it's tempting to suggest that he just take it back, tweak it some more, and try again. But that's not how it works, and the film is what is it, which is a stylishly crafted and executed piece that is visually engaging and even, at times, daring, but which never offers much more than a surface perspective on its allegorical tale of income disparity and social inequity. It gets off to a good enough start, leading with the dark humor and element of the grotesque that will define so much of what is about to unfold, but somewhere around the middle it starts to sag, its storytelling style leaving its lack of depth exposed, and by the end it actually starts to feel a bit tiresome. There are a number of great images and individual scenes and moments in High-Rise, but taken as a whole it ultimately doesn't amount to very much.

The story centers on Dr. Robert Laing (Tom Hiddleston), a doctor specializing in physiology who aims to rise up in the social world. He's just moved into an apartment in a high-rise that's part of a multi-building development where he quickly learns that the social order of the residents is stratified in accordance with the social hierarchy of English society. At the bottom are the working class people, comprised mostly of young families, including Richard and Helen Wilder (Luke Evans and Elisabeth Moss), a documentary filmmaker and his heavily pregnant wife. In the middle are people like Laing and Charlotte Melville (Sienna Miller), a single mother with whom he becomes involved, and at the top are the rich, the well-connected, and the vaguely aristocratic, including the development's architect Anthony Royal (Jeremy Irons) and his wife, Ann (Keeley Hawes), whose rooftop garden is extravagant enough that it could pass for the property surrounding a grand country estate, complete with horses, goats, and plenty of dogs, and she swans around it like Marie Antoinette in her miniature village. Royal, meanwhile, appears to view himself as a benevolent, if fairly disinterested, God (and, indeed, he's designed the development so that each high-rise will be like a finger surrounding a lake, which will serve as the palm of a hand - his hand).

Not long after Laing moves in, the tensions in the building stemming from the struggle of the lower floors to get their share of the resources (such as electricity) and equal access to the amenities (such as the pool) begin to reach a fever pitch. The lower floors are led in their struggle by Wilder, who becomes inspired to expose what's going on in the high-rise by the suicide of Munrow (Augustus Prew), a resident of one of the upper floors and a student of Laing, whose death gets swept under the rug. As the residents of the building begin a swift descent into chaos, with sections of the building forming tribes that war against the others and people looting the building's grocery store and committing other acts of violence, life becomes a brutal struggle for survival. Although escape would only be a matter of walking out of the building, the residents instead cut off contact with the outside world and become firmly entrenched in the battle taking place inside. As Wilder fights to get to the 40th floor, and to Royal, the upper floor gang plots to get rid of Wilder for good - and to use Laing to do it.

Although there are moments verging on brilliance scattered throughout High-Rise, the film suffers on a narrative level because it skimps on the most interesting part of the story. It spends a lot of time establishing how things are in the high-rise when it's functioning (or, rather, "functioning") and it spends a lot of time luxuriating in the aftermath of the breakdown of society within the building, featuring multiple scenes of roving gangs inflicting their will on others, of Wilder sexually and physically abusing Charlotte after he discovers her connection to one of the people in power, of Royal expressing his power through the accumulation of a harem of women, but it doesn't spend much time showing how the story gets from one way of living to the other. It's not just that the breakdown happens swiftly; it's that it feels like it happens off-screen. The transition from "normal" life to post-apocalyptic life is immediate, as if a switch just flips the night of the power outage and Munrow's suicide, and that makes it feel like a piece of the story is missing, which in turn makes the film's exploration of society through a microcosm feel somewhat empty.

That said, while I felt that the film wants to say something about society more than it actually does say anything about society, there are a number of things about High-Rise worth recommending. It's a visually interesting film that delivers a lot of fascinating and enthralling individual images, particularly in its rendering of that top floor that opens out onto the rooftop garden, which is made to seem almost Edenic in the way that Laing (and the viewer along with him) is introduced to it, and Hiddleston's performance as Laing is great. As the character who provides most of the film's perspective, Laing is given a lot more shading and complexity than the other characters, and his descent into madness (spurred not necessarily by life in the high-rise, but by an act of pettiness that has consequences he didn't foresee) provides the story with at least something of a narrative center. Also great is Evans as Wilder, a character who manages to be absolutely right about the high-rise, and yet is such an impulsive and destructive asshole that even when he's right, he seems wrong. Evans brings a tremendous amount of energy and volatility to his scenes that plays particularly well against Hiddleston's more understated portrayal of a man becoming unhinged in his environment. I'd say see it for the performance and the visual flair, just don't expect it to stick with you for very long afterwards.
Posted by Norma Desmond at 8:00 AM