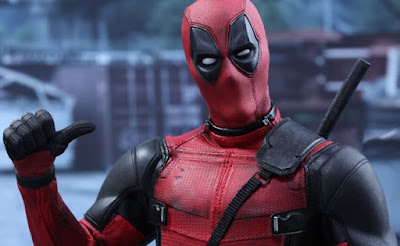 Deadpool is Wade Wilson (Ryan Reynolds), a mercenary who, after being diagnosed with terminal cancer, turns himself over to a recruiter from a secret program that claims to offer an experimental treatment that would not just save his life, but make him a "superhero." When he arrives at the facility, he's turned over to Ajax (Ed Skrein) for "treatment," which consists largely of torture sessions designed to put his body under enough stress to force alive the mutant genes that have been dormant inside of him. Once those genes finally become active, changing Wilson's appearance so that he becomes disfigured over his entire body, but revealing that he has a healing power that cures his cancer, Ajax reveals that he's not being made into a superhero at all, but a slave who will be sold to wealthy buyers in the market for super-powered humans. When Wilson manages to escape captivity, he and Ajax end up in a battle which ends with the latter impaling the former and leaving him for dead in a burning building - but it turns out that Wilson doesn't just merely heal fast, he's pretty much unkillable.

In the aftermath, Wilson transforms himself into Deadpool and makes it his mission to track down and kill everyone associated with the organization which left him disfigured and unable to bring himself to return to his one-time fiancee Vanessa (Morena Baccarin), and particularly to take his revenge on Ajax. When he finally does come face to face (or, as close to face to face as can be when one person is wearing a hood over their head) with Ajax, his plans to straight up murder him go awry when the destruction wrought as he mows through bad guys to get to the one he wants ends up on the news and attracts the attention of the X-Men - or, at least, the only two X-Men who appear to be at home at the moment: Colossus (Stefan Kapicic) and Negasonic Teenage Warhead (Brianna Hildebrand). When Deadpool becomes distracted by the arrival of the X-Men, Ajax escapes and then goes on to kidnap Vanessa. Determined to save Vanessa, Deadpool talks Colossus and Negasonic Teenage Warhead into helping him go after Ajax so that he can save the girl and kill the bad guy once and for all.

Adapted for the screen by Rhett Reese and Paul Wernick and directed by Tim Miller, Deadpool is a film that unfolds with an effortless seeming looseness. If done right, Deadpool was always going to be a different kind of superhero movie, if only because the character is self-aware and cognizant of the fact that he's a character in a comic book. The Deadpool of the film is similarly aware and the film allows him to break the fourth wall often, but without overusing it as a narrative device. The film finds just the right eccentric, slightly chaotic, tone and just the right balance between silliness and seriousness (Wilson and Vanessa may be a tongue-in-cheek pair, but the film is nevertheless able to sell the idea of them as two misfits who've somehow found each other and developed something genuine). Most importantly, it has just the right actor in the lead. Prior to Deadpool Reynolds was a beleaguered star, unable to make the leap to successfully carrying a film on his own despite many attempts. But this is a perfect example of the right actor meeting the right role, and the affection that Reynolds clearly has for the character, and the amount of fun he's having playing him, is contagious.

Granted, Deadpool may not be for everyone. It's violent and crass and maybe for some the fourth wall breaking wisecracks will be just a little too cute. But, in a genre that is increasingly dominated by groupthink and trends, where new films go into production merely trying to emulate whatever was just a hit, it's refreshing to see a film like this that has such a sharp sense of its own identity and such a willingness to do its own thing, even if that's not what every other film is doing. It's also nice, if you're tired of the seemingly endless conversations about superheroes and their accountability, or lack thereof, for the innocent bystanders that get hurt in the process of their heroics, to watch a superhero movie that doesn't even pretend to care about that issue (and, if it did, would probably do so by having Deadpool turn to the audience and remind them that those bystanders are just actors in a movie running around in front of a green screen) while gleefully unleashing mayhem from one side of the screen to the other. Deadpool is the perfect antidote to the average superhero movie.
Posted by Norma Desmond at 8:00 AM