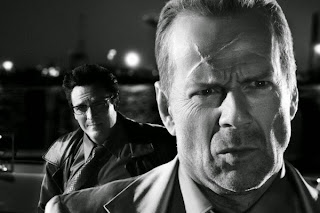 True confession time. Until getting ready to write this piece, I had never actually seen Sin City in its entirety, but only in bits and pieces. Having now watched it from beginning to end, I can officially confirm something that I've always suspected: I hate this movie. I hate it on its own merits for its repugnant attitudes, and I hate it because it's been elevated in some circles to the level of a masterwork of genius simply because it looks kind of cool and has the audacity to unapologetically wallow in the cesspool of its own misogyny and self-satisfied machismo. Don't get me wrong, I can understand how, in 2005 and before the effect of its visuals could be diminished by time and imitators, the film could seem dazzling enough to distract from how ugly it is on a thematic level; but I don't really understand how it is that the bloom hasn't yet fallen off the rose when the film in question is so empty and gross.

The Story
Sin City is comprised of several short stories set in and around the violent, morally decayed locale of Basin City. There tough guys with hearts of gold like Hartigan (Bruce Willis), Marv (Mickey Rourke), and Dwight (Clive Owen) seek to avenge, defend, or protect the honor of women like Nancy (Jessica Alba), Goldie (Jaime King), and Gail (Rosario Dawson) against the evil intentions of tough guys with hearts of depravity like Roark Junior (Nick Stahl), Kevin (Elijah Wood), and Rafferty (Benecio Del Torro) and the forces of corruption and malice which support them. Blood will be shed, bodies will be tortured, and women will be continuously disrobed - it is, after all, known as "Sin City."


The View From 2005
The Good: "Rodriguez doesn't just transplant Miller's frames. He celebrates, even fetishizes them. The images seem dredged up from the collective unconscious of graphic-novel freaks. It seems pointless to tut-tut over the depravity. Sin City is like a must-have coffee-table book for your interior torture chamber." - David Edelstein, Slate

The Bad: "The stylish blend of CGI- exoticism and non-stop mayhem generates a certain visual fascination. But the movie can't sustain it, and after the first segment it's hard to imagine how anyone could find its trashy excess anything but tedious and repulsive. Everything that happens in the movie is a deliberate cliché, the stories have little narrative drive or interest, the dialogue is banal pseudo-Raymond-Chandler drivel and the performances are as shallow and posturing as the goofiest "SNL" skit." - William Arnold, Seattle Post-Intelligencer


The View From 2015
I don't want to belabor the point about how thematically repulsive I find Sin City, so I'll keep this as brief as possible. Between the physical abuse doled out and taken by the male protagonists, the hardboiled flexing of their voiceovers, and their relentless drive to wrap up their unfinished business even as multiple bullets bury themselves into their flesh, not to mention the film's conception of women to nothing more than victims, damsels in distress, and/or sexual objects, Sin City is so swelled with testosterone that it ought to be tested for steroids. Of course, Sin City isn't alone in draping its story over a framework of misogyny, but what makes it feel so egregious with this film is the amount of pretense involved. Some of the misogyny is blunt and in your face, a thing used by the film as a means of reveling in how disgusting its villains are, but some of it is disguised as a kind of rough chivalry as the "good" bad men do their part to reduce the female characters to objects whose fates will be decided according to which of the men in their proximity proves to be stronger; and some of it is put forward as a kind of faux-empowerment, as if the creators anticipated this kind of criticism and slapped together something which might pass for a shallow kind of feminism as long as you held it up to absolutely no scrutiny whatsoever. Sure, the women of Basin City have their own section of town where they're in "charge" and allowed to deliver justice as they see fit, but three points about that: 1. even though it's their "town" where they can run things however they want, they're all still hookers and strippers whose existence and subsistence is dependent on the pleasure of men; 2. their authority is nothing more than a facade gifted to them by the police force and it disappears the second that truce is broken; 3. even though these women are tough and capable of inflicting a fair bit of harm on the men around them, it's still ultimately up to a man (Dwight) to save them after they overzealously dispose of a car full of men who drift into their part of town and almost start a civil war (the fact that the film isn't endorsing their aggression even as it glamorizes it is apparent in the fact that the women's opening salvo of violence comes in the form of a throwing star shaped like a swastika).

On a visual level Sin City nearly manages to justify its existence, as even though its style has been imitated by others and revisited in basically every project that co-director Frank Miller (who is responsible for the graphic novel on which this film is based) has been involved with, it can still pack a strong punch in this particular regard. The story "That Yellow Bastard (Part II)," in particular, boasts some fairly glorious images and as a whole the film is an aesthetically dynamic piece of work. However, even when Sin City is finding new ways to make its twisted tale into something almost beautiful in its brutality, I couldn't help but wonder what the point of it all was. Am I rooting for any of these characters while I'm watching them? Not especially (the only possible exception being Hartigan, who has the distinct advantage of battling against a child rapist) because none of the characters - not the good guys, or the bad guys, or the women whose victimization is their bread and butter - is developed enough to actually carry the motivation that's supposed to drive them and their respective story. What, fundamentally, is the difference between Hartigan, Marv, and Dwight, and couldn't any one of them be slotted into the leading role in any of the stories without having to change much? These aren't individuals. They're interchangeable ciphers unleashed on the screen to enact an adolescent fantasy of savage violence which is justified by putting them on the side of "good" as the saviors and avengers of women without agency. In that respect the film's depiction of men is actually almost as off-putting as its depiction of women.

But maybe none of that matters. Maybe it's enough that it looks cool and that it makes such a tremendous effort to evoke the pulp feeling of the grittiest kind of noir stories. Maybe it's enough that it ushered in a comeback for Mickey Rourke, who was nominated for and won some critics awards for this performance. Maybe the film's hyper-masculinity and willingness to locate the depths of depravity and then dig just a little deeper, is actually something to be admired. Others obviously see something in Sin City that I just don't, and I'm well aware that mine is a minority opinion. Maybe if I'd seen Sin City back in 2005 I would have been impressed enough with the novelty of it to see past all the things I find objectionable, but watching it in 2015 I just found it tiresome.
Posted by Norma Desmond at 6:26 PM