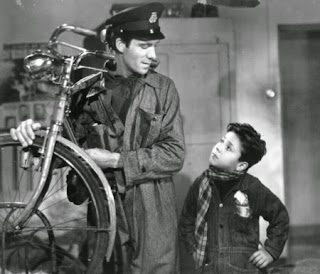 Despite having been a movie blogger for going on 8 years, and a movie buff for considerably longer, I've somehow never gotten around to seeing The Bicycle Thief (also known as Bicycle Thieves) until just recently. Even though it's one of the major works of the Italian neorealism movement, not to mention a work that is hailed as one of the greatest of all time, I just never found the time to sit down and watch it until now. My mistake, I have no excuse, but I can now confirm for myself that it truly is one of the greatest movies ever made. A beautiful, heartbreaking piece of post-WWII work, The Bicycle Thief is a movie that every film fan should see - and probably sooner than I did.

Set in Rome, The Bicycle Thief is about the brief triumph and long tragedy of Antonio Ricci (Lamberto Maggiorani), a man who, like hundreds of others in a place still rebuilding from the destruction of WWII, is unemployed and struggling to support his family, which includes his wife, Maria (Lianella Carell), their baby, and their young son, Bruno (Enzo Staiola). When a job presents itself he takes it, though it requires him to have a bicycle and his is currently sitting in a pawn shop. With Maria's help, Antonio is able to get his bicycle back and leaves for work the next morning with a palpable sense of pride and Enzo in tow, clearly in awe of his father. Antonio's job requires him to go around Rome putting up advertising posters, and on the very first day, as he stands at the top of a ladder affixing one of the posters, his bicycle is stolen. He gives chase but is unable to catch the thief and when he goes to make a police report, he's informed that they won't actually look for the bicycle (they have bigger crimes to deal with) but that if he finds it himself, they'll use the claim he's made to get it back for him. Dejected, Antonio leaves the police station, wondering how he's going to find his bicycle in a place as big as Rome and what he's going to do if he loses his job.

With Bruno and several friends at his side, Antonio goes out to a market where stolen goods often surface to look for his bicycle. Unfortunately most goods, by the time they make it to the market, have been stripped for parts, which means that Antonio and his friends aren't looking for a bicycle so much as they're looking for the individual pieces of the bicycle. They leave empty handed, but then Antonio spots the thief with an old man and, though the thief disappears again, Antonio is able to catch up to the old man and tries to get him to tell him where he can find the thief. Like the thief, the old man is eventually able to give Antonio the slip, and father and son continue to make their way through Rome as Antonio struggles to figure out what he's going to do until, once again, he spots the thief. Finding the thief, however, ultimately accomplishes nothing for him and he's left in much the same place he was before. On the verge of oblivion if he loses his job, Antonio finds himself considering the unthinkable: becoming the very thing that has put him in this position in the first place.

The story told by The Bicycle Thief is very simple, which is part of the reason why it's so deeply moving. It's about a man who needs a job - that's the extent of his ambition, simply to work and support his family - and goes to desperate lengths as he tries to keep it. That that task seems to brutally impossible - he has two needle in a haystack searches ahead of him, first that of searching through all of Rome for one bike, and then searching through the market for the individual pieces of his bike; and then when he somehow finds the thief, he has to contend with the residents of the thief's neighborhood closing ranks against him, denying him justice - speaks to the reality of the circumstances out of which De Sica was making the film. It isn't just a matter of poverty and unemployment in a city (and country) still feeling the economic and social effects of wartime devastation, it's that poverty is a cycle that is going to continue to perpetuate itself. When it becomes clear that he's not going to get his bicycle back, Antonio is left with two undesirable options - give up on getting a bicycle and lose his job, or steal someone else's bicycle so that he can keep his job. If he steals a bicycle, it won't be an act done out of malice, but out of desperation - and that's probably how his own bicycle ended up stolen, too. The film's ending is so shattering not merely because of where Antonio and Enzo end up, but because their plight, their desperation, and their hopelessness are things that they share with countless others.

The Bicycle Thief could be called a "sentimental" film, particularly when it focuses in on Staiola's angelic face, using him to elicit what, in a lesser film, would be cheap emotion, but if this film is sentimental, it's sentimental in the way that Charlie Chaplin's films could be. Chaplin was a master at tapping into the audience's emotions and playing the heartstrings in just the right way so that it felt less maudlin or mushy than cathartic. The Bicycle Thief is like that (and with its focus on the relationship between Antonio and Enzo, it's a little reminiscent of Chaplin's The Kid); it's a film that is very open with its emotions, but tempers that with a story that has an inherent hardness at its core. The reality that the film is depicting is not easy or pleasant; it is merciless and the characters aren't going to survive it just because they're so likable. That's part of what makes The Bicycle Thief as enduring as it has been: sentimental though it may be, it's still a gritty work grounded in reality.
Posted by Norma Desmond at 8:00 AM