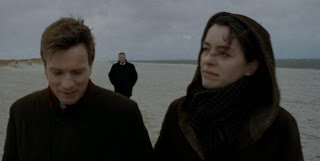 Any number of perfectly competent directors probably could have taken the story of The Ghost Writer, based on the novel “The Ghost” by Robert Harris, and made a pretty nifty thriller out of it - it has so many elements in place for success just on a basic story level that I think it would be difficult to screw this up. That said, if it only had a “competent” director, then it would merely be an entertaining little potboiler. In the hands of a masterful director like Roman Polanski, it becomes something far greater, something which is still greatly entertaining, but also terrifically artful. Though it could never be given points for subtlety in terms of the real life figures on which some of its characters are based, it’s nevertheless an expertly crafted film where the sinister lurks at every edge.

There are two ghosts in The Ghost Writer. The first is never seen onscreen but is a presence who looms over the proceedings and, in some respects, guides them. That ghost, Mike McAra, was the original ghost writer of the memoirs of former British Prime Minister Adam Lang (Pierce Brosnan) and has died under mysterious circumstances (officially called suicide), leaving behind a manuscript that publishers feel isn’t quite ready. The second ghost, credited merely as “The Ghost” (Ewan McGregor) is the writer hired to re-draft the memoirs, though he has no particular interest in politics and he’s uneasy about the quick turnaround that the publisher is expecting so that the book can be rushed into publication. When he arrives in Martha’s Vineyard to begin working on the manuscript and interviewing Lang, he walks into a veritable hornet’s nest. On the domestic front, tensions in the Lang household are high as Lang’s wife, Ruth (Olivia Williams), battles with his assistant/mistress Amelia (Kim Cattrall) for control. On the political front, the Ghost has barely arrived before Lang finds himself in the middle of a political firestorm when his former Foreign Secretary publicly accuses him of authorizing the seizure of suspected terrorists for torture by the CIA, leading to an investigation by the International Criminal Court for war crimes.

While Lang heads to Washington to meet with the U.S. administration, the Ghost cools his heels in Martha’s Vineyard, trying to find a way to improve on the manuscript, which he finds dry and dull, and discovers evidence originally uncovered and then hidden by the first ghost which reveals that Lang is lying about how and when he became politically active. As he does some further digging, he finds himself following in his predecessor’s footsteps, uncovering the secrets that the first ghost discovered and finding evidence which suggests that Mike was murdered because he started to uncover secrets that very powerful people would prefer to keep hidden. As he ponders what, exactly, he’s stumbled into, he must also figure out who he can trust to ensure that he doesn’t meet the same fate as Mike.

A feeling of menace permeates every part of this film, from the opening scenes where Mike’s abandoned car is discovered on a ferry, onward. From the dark color pallet, which relies heavily on grays, to the cold, sleek interior design of the Martha’s Vineyard house which offers little relief from the stormy weather outside its walls (not to mention the way the space is depicted in a way that makes it seem at once open and claustrophobic), to the forbidding aura of everyone who seems to surround Lang, every element of the film leaves you waiting for the other shoe to drop and for the Ghost to fall into the trap which has surely been set. Even the simple act of a note being passed through a crowd towards its intended recipient is imbued with a sense of doom. At the same time, however, the film never becomes weighted down by its atmosphere and is, in fact, very light on its feet as it unfolds its plot. From the airy score by Alexandre Desplat, which gives the detective scenes the feel of a caper without in any way detracting from the seriousness of the proceedings, to the sharpness of some of the dialogue (Ruth, on being informed by her bodyguard that he can’t leave her side even for a moment for security reasons, tells him, “If I see a terrorist, I’ll text you,” as she sends him on his way), The Ghost Writer finds just the right balance in its tone, and manages to unfold itself with a smoothness and an effortlessness that can only come from a master craftsman.

On a performance level, The Ghost Writer is equally strong. Brosnan’s Lang is elusive and defensive, a man who doesn’t want facts to spoil a good story, bristles at being questioned, and who has a deeply rooted anxiety that he's not taken seriously as a politician, despite his achievements, because of his past as an actor. He is dependent on Ruth, who is either his most trusted adviser or his handler, depending on your perspective, yet jeopardises that relationship through an affair with Amelia which is so open that Ruth doesn’t think twice about alluding to it in front of a room full of people (who then silently, and hilariously, file out of the room trying not to make eye contact with Ruth, Adam, or the Ghost). As Ruth, Williams is the story’s wildcard, playing the political wife who seems both better suited to the job and far more ambitious than her husband and whose motivations aren’t always clear. In the tradition of Lady Macbeth, she’s the true power in the relationship, and as the plot begins reveal itself, she’s the mystery within the mystery and Williams’ performance is fantastic and never falters. In the central role as the Ghost, McGregor is solid even if the role, by its very nature, is the story’s most muted. He’s the everyman who finds himself in extraordinary circumstances that he doesn’t fully comprehend, and that will always be less interesting that the rogue’s gallery that surrounds and impedes him, but McGegor brings a weariness and a mischievousness to his performance which is valuable and necessary to the success of the film.

The Ghost Writer is a really terrific film, a thriller which remains entertaining and enthralling after multiple viewings. It is, to my mind, one of the most underrated films of the last several years but it’s one which I think will stand the test of time and will be rediscovered and revived (the way that some masterpieces are) in the years or decades to come. Hopefully it only takes years instead of decades, as the film’s many delights are well worth experiencing.
Posted by Norma Desmond at 8:00 AM