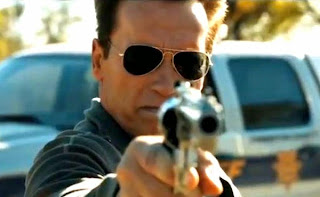 Have I been watching movies lately that bear any resemblance to The Last Stand? Not really. Did Netflix think I would think The Last Stand is good? It did not. Am I an Arnold Schwarzenegger fan? Outside of The Terminator movies, not particularly (though I do love it when he shows up in movies with names like "Gordy Brewer" or, as in this one, "Ray Owens"). So naturally Netflix recommended this 2013 Schwarzenegger return to acting vehicle. Was it worth the time? Eh, it had its moments, though it never really gets a handle on the tone and its split storyline (only one half of which it's really invested in) is a lot busier than it needs to be.

The Last Stand is set primarily in the tiny border town of Sommerton where, as the film opens, the vast majority of the town's citizens are taking off for the weekend to go support the high school football team at an away game. Among the few who stay behind are the town's Sheriff Ray Owens (Schwarzenegger), who has the day off but wants to be around in case anything happens, and besides which has had more than enough excitement in his life which is what drew him to the sleepy town in the first place. He's barely started his day off, however, when his spidey sense begins tingling after an encounter with Thomas Burrell (Peter Stormare), a man who claims to be a trucker just passing through but who is in actuality a mercenary in the employ of a notorious cartel kingpin named Gabriel Cortez (Eduardo Noriega). As Burrell is making his preparations in Sommerton, Cortez is in FBI custody in Las Vegas and uses the FBI's attempt to transport him to stage his escape, kidnapping a young agent (Genesis Rodriguez) in the process. When Bannister (Forest Whitaker), the agent in charge of Cortez's case, throws out blockades to try to stop Cortez's progress towards the Mexican border, Cortez blows through them, slaughtering every officer in his path.

Back in Sommerton, the realization that something is truly amiss hits Owens after a local farmer is found murdered in his home. As he and his officers - his second in command Figgy (Luis Guzman), and the still green young officers Bailey (Zach Gilford) and Torrance (Jaimie Alexander) - search for clues, they accidentally uncover Burrell and his team building a bridge across a canyon that separates the US from Mexico, and the mercenaries engage them in a firefight and end up killing Bailey. Having been given the heads up by Bannister that Cortez is heading his way, and knowing that once Cortez and Burrell get together the bloodbath is only going to become more intense, Owens begins preparing to take down the mercenaries in order to protect his town. Having lost one of his officers, he recruits Torrance's ex-boyfriend, Frank (Rodrigo Santoro), a former Marine whose PTSD related problems have resulted in Torrance breaking up with him, and local eccentric Lewis (Johnny Knoxville), who isn't especially competent but is an arms collector with a vast stock of weapons which will come in handy against the mercenaries (and some that won't - when Figgy picks up a medieval mace, Owens reminds him that he's not going off to fight in the Crusades), to fill out the ranks. Having loaded up and done what they can to create choke points throughout the town, Owens and his team prepare for a showdown with Burrell and Cortez.

Directed by Kim Jee-woon, making his American feature debut, and written by Andrew Knauer, The Last Stand is a seriously mixed bag as a film. The sections dealing with events in Sommerton and following Owens are actually fairly strong - at that point Schwarzenegger hadn't headlined a film since Terminator: Rise of the Machines in 2003, but the time away from leading roles had done nothing to diminish the fact that he had and has genuine star quality and charisma - and the film has some fun with the Schwarzenegger persona and the undeniable fact that he's aged since his action movie glory days (at one point Owens goes flying through a window and when another character then asks him how he's doing, he replies, "Old."). In contrast, the sections of the film which follow Bannister as he fruitlessly tries to stop Cortez, tries to figure out who Cortez's inside man is among his fellow FBI agents, and engages in a bizarrely (and counter-productive) adversarial relationship with Owens, and those which follow Cortez as he cackles maniacally about his genius and unstoppability, really drag the film down, creating a vibe which is at odds with the one in which the Sommerton scenes unfold, and creating a sense that the film is a result of two stories being crammed together without any particular finesse. It doesn't help, of course, that the characters in the Sommerton section are at least partially fleshed out while the FBI characters and the bad guys are all thin as can be; it's impossible to care about any of them or what they're doing, so the time the film spends with them just makes you anxious to get back to Owens and his rag tag crew.

The problems with the film's tone are not just the result of the two halves of the story not really lining up together, however. Many times throughout the story, The Last Stand presents itself as if its intention is to be a comedy, and though it can sometimes be funny, it's so brutal in its violence that laughter is never the norm. If you were to take a drink every time a character in this film not only got shot, but got shot in the head, you'd be dead of alcohol poisoning before you reached the end. A significant portion of the film plays out amidst a thin mist of red as blood and brain matter spray across the screen - which isn't necessarily a bad thing; in an age where action movies are all created to get a PG-13 rating and thereby reach as wide an audience as possible, it's actually sort of admirable for a film to have such hard, uncompromising edges, but you can only watch so many people get shot in the head (one character actually survives the first shot and then has to take a second to the head) before it just starts to seem rote and uninspired. In the end, The Last Stand is fine if you're looking for mindless action, but it's really nothing special, even if it does demonstrate that Schwarzenegger, long in the tooth though he may be, is still more than capable of carrying a movie.
Posted by Norma Desmond at 8:00 AM