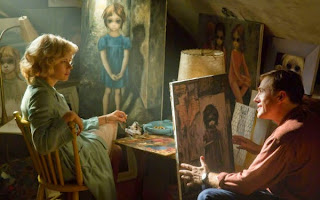 Big Eyes, which is perhaps the least "Tim Burton-y" movie Burton has ever made (though a strong argument could be made for the whimsy-less Planet of the Apes remake), starts so strong that I found myself baffled by the rather lackluster reception it received when it was released theatrically in December. The first act of the film is so strong that it genuinely felt like the film was unfairly sold short, if not exactly "maligned," perhaps as a result of being released during the part of the year when everything is expected to be a masterpiece; and then the rest of the film happened, and suddenly I understood. It's not that Big Eyes is a bad movie - it's perfectly fine - it's just that it lays down the foundation to actually do something with its subject and then seems to lose its nerve and falls back on genre tropes and dashes of wackiness before puttering to its conclusion.

Big Eyes is the story of American artist Margaret Keane (Amy Adams), who as the film opens is fleeing her first marriage with little more than her daughter and her artwork. They end up in San Francisco, where Margaret struggles to support herself and her daughter and is later served with court papers by her ex-husband, who is pursuing custody of their daughter on the grounds that as a single woman, Margaret is unfit to raise her. Fortunately (or so it seems, at first) she has gotten involved with Walter Keane (Christoph Waltz), a realtor who, like Margaret, is trying to make a living at painting and who says and does all the right things to charm her and make her believe that he's the real deal. When Margaret learns of the impending custody battle, Walter proposes to her and she accepts, so blinded by his charm and the convenience of it all that she doesn't stop to consider if she really even knows him. Once they've married, Walter makes a deal with the owner of a local jazz club to "exhibit" his paintings as well as Margaret's, and during the course of his evenings spent at the club trying to smooth talk potential customers and sell the pieces he realizes that people are far more interested in Margaret's paintings of big-eyed children than his Parisian street scenes. Walter begins taking credit for the paintings, justifying his actions to Margaret by pointing out that customers are more likely to buy art if they meet the artist and that Margaret lacks the gift of the gab that Walter has been blessed with. When the moment comes for Margaret to set the story straight, she instead allows Walter to continue building the lie and from then on reluctantly agrees to go along with it, continuing to create paintings and letting Walter take the credit for them.

Walter's gift for self-promotion turns the big-eye paintings into an industry, making him famous and him and Margaret rich. As time goes on, however, Margaret begins to bristle at not being given credit for her work and begins pushing to put her own name on her paintings. Walter partially relents, agreeing to let Margaret put her name on a series of new paintings done in a different style and display them in the Keane Gallery, but it doesn't stop Margaret's resentment from growing. As time goes on and the layers of Walter's deception begin to peel away, Margaret is forced to reckon with the fact that he's been a fraud in every respect, rather than just with regard to the big-eye paintings. She decides to take back control of her life and her legacy, but discovers that it's not quite that easy. After decades of publicly helping to perpetuate the lie, the cards are largely in Walter's hands - despite what Margaret herself knows, Walter has the money, the legitimacy, and perhaps most dangerously of all, he has the belief, thanks to his gift of even self-deception, that he's the righteous party.

With its early emphasis on the difficulties that Margaret faced as a woman in the 1950s and 60s, Big Eyes at first seems like its going to be a movie with a point to make. We know nothing about Margaret's first marriage, but the way that she gets herself and her daughter out of dodge suggests that it's a bad situation. Yet even after she leaves, she's still in an incredibly vulnerable position because, as a woman, the legal system is stacked against her and so is the economic system. Her ex-husband pursues custody of their daughter on the basis that the home of a single mother is a place unfit to raise a child, and she has difficulty finding a job because the market favors men and her work experience is nil because society dictated that her value was in her ability to find a husband and be a wife. She can't sell her work because people don't buy "lady art" and are disinclined to take female artists seriously. The whole premise of the story, with Margaret subjugating herself to Walter and being the woman who is seen but not heard, is set up to allow for a deep exploration of the kinds of issues which sparked the second-wave feminist movement, but instead of following through on that Big Eyes chooses to become a standard biographical triumph over adversity story. Margaret Keane's story is an interesting one which has the possibility of speaking to the ways that our society both has and has not changed 60 years, but Big Eyes ultimately decides against taking the opportunity to tell it.

On a narrative level, Big Eyes is a bit of a let down, eschewing the opportunity to tell a story of some cultural relevance in favor of returning to the biopic well, but in other respects its an interesting and often even a good piece of work. The production design by Rick Heinrichs, which somehow did not receive an Oscar nomination, is excellent and is the element of Big Eyes which most clearly connects it to Burton's other films (but without abandoning a foundation of realism), and Waltz is typically wonderful in the ever shifting role of Walter, a shyster who never speaks a word but to twist it and make it false. Walter might be a mirage, but it's easy to understand why Margaret could fall for it given Walter's ability as a smooth talker; and while the court room scenes of the final act are the point where the film gives in most towards an instinct for wackiness (which, in fairness, may very well be a reflection of the reality of those proceedings; I don't know), it's nevertheless a delight to watch Waltz put on the show. Adams, meanwhile, does more than might be expected with her character, given that the film itself sometimes treats her as Walter's shadow. It's too bad, though, because it would have been nice to see what an actress of her caliber could have done with the material, had the material actually risen to meet her abilities.
Posted by Norma Desmond at 8:00 AM