21st Century Essentials... The Assassination of Jesse James By the Coward Robert Ford (2007) 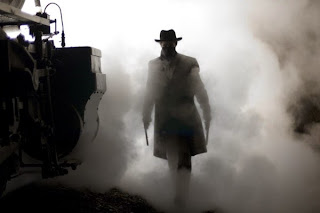 When the legend becomes fact, print the legend. But who, exactly, benefits from the legend? Andrew Dominik’s The Assassination of Jesse James By the Coward Robert Ford, adapted from the novel of the same name by Ron Hansen, is about men living in the shadow of legend, benefiting and suffering from it in nearly equal measure. It is a visually and narratively stunning film, a thoughtful meditation on the nature of celebrity and on the romanticized view of outlaws which transforms killers into folk heroes, the story of two men seemingly locked in place by the demands of folklore and marching towards their joined fate. It is a wonderful, poetic film. Naturally it was abandoned in theaters by its distributor, yet another example of Hollywood studios not understanding that the gems they seek are already in their possession.

Spanning the years 1881 to 1892, The Assassination of Jesse James... begins with the final train robbery by the James brothers, Jesse (Brad Pitt) and Frank (Sam Shepard), whose famed gang has been largely decimated over the years by death, arrest, and abandonment, and who are forced to recruit locals to fill out their ranks. Among those is Bob Ford (Casey Affleck), whose brother Charley (Sam Rockwell) is already in with the James brothers, and who is so enamored with Jesse that at times he seems more like a blushing school girl than a criminal. His adoration of the outlaw is lost on no one, particularly Jesse himself, who alternately tolerates, encourages, and disdains Bob’s attentions, depending on his moods and needs. While Bob is ultimately of little use to Jesse as part of a criminal enterprise, as the west changes and the forces of law and order increasingly close in and eliminate what space remains for Jesse and men like him, Bob proves to be, in a sense, Jesse’s savior. While the film’s title leaves little mystery with regard to how the relationship between the two men came to its end, The Assassination of Jesse James… really isn’t about Jesse’s murder. Rather, it’s about what it means that Jesse James has been murdered, what it means that a criminal who killed people in cold blood has become a part of the romantic myth of the American west, and how Jesse himself may have been the engineer of his own death, guiding Bob’s hand so that he could go out in the same way he lived: defiantly and in his own way.

Dominik lets the story unfold slowly, taking great pains to properly set the table for the event of the film’s title, allowing the key members of the James gang to become fully formed, their relationships with each other and with Jesse fleshed out to give events deeper context and meaning. Because we already know from the title where the story is going, there’s no real need for urgency in the storytelling and Dominik has the luxury of spending time with these supporting characters, allowing the plot to progress with a domino effect, with the actions of one supporting character leading to the actions of another, leading to the actions of another, until it finally comes to Jesse and Bob, who the film depicts as essentially being forced into the act which will forever tie them together. Jesse, weary, paranoid, and increasingly emotionally unstable, more or less invites Bob to murder him, and Bob, heartsick before he even commits the act, shoots Jesse and then collapses on a couch, stunned and despondent. As the film tells it, it’s as if Bob did not want to kill Jesse but recognized that he must, just as Jesse recognized that his time had come and he had to let Bob end his life.

The relationship between Jesse and Bob, up to and including Jesse’s death, is fascinating as told by Dominik and as visualized by him and cinematographer Roger Deakins (who, along with Affleck, received the film’s only two Oscar nominations). Throughout the film Jesse appears just slightly out of focus or through a mist – the mist of Bob’s mind and the mist of history. Jesse is always at a distance from us, what we know of him being learned through the voice-over’s flat, matter-of-fact narration, and Bob’s own perspective and his encyclopedic knowledge of his idol. Jesse is the dominant figure, but this is ultimately Bob’s story. In the aftermath of the murder, Bob is reviled for having shot the folk hero in the back, yet people flock to the staged re-enactments that Bob and Charley put on, just as they flock to the home where Jesse was murdered and to the public spaces where Jesse’s corpse, laid out on a bed of ice, is displayed for all to gawk at. In death Jesse is revered, with photos of his corpse being available for sale all over the country, songs being written about him, and children being named after him, but it is Bob who has made this possible by eliminating the fear that Jesse inspires. His reward is not the thanks he was expecting or any degree of adulation; the absence of the fear that surrounds outlaws creates a vacuum which becomes filled by hatred for Bob. Technically Bob assassinates Jesse, but effectively it is Jesse who has assassinated Bob, ensuring his own ascension to the level of myth and condemning Bob to a life of disdain and ignominy.

Visually, The Assassination of Jesse James… is a breathtaking film with shots of stunning beauty and awe-inspiring breadth. In terms of the acting, the film is like a masterclass, with Pitt delivering a tightly coiled, charismatically sinister performance as Jesse, and Affleck delivering a performance of sometimes painful vulnerability, and bald obsequiousness slowly curdling into resentment and indignation. These two captivating central performances are surrounded by great supporting performances, from Rockwell as Charley, who is destroyed by Jesse’s assassination just as Bob is, but in a different way; to the always dependable Garrett Dillahunt as a dimwitted member of the James gang whose death almost feels like the act of putting a sick animal out of its misery; to a pre-stardom Jeremy Renner as Jesse’s cousin, who all too readily trades on the family relation as a means of exercising power; to Paul Schneider, whose career has somehow never taken off, as a calculating member of the James gang. There’s a lot to love with The Assassination of Jesse James…, which is a great film in every respect. It is a spellbinding work of art and one of greatest films to be released in the last ten years.
Posted by Norma Desmond at 8:00 AM