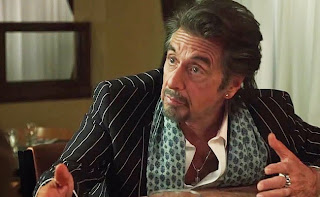 If it had been released at pretty much any other time of year, I don't know that I would have enjoyed Danny Collins as much as I ultimately did. It's the sort of low in ambition, high in easy sentiment, middle of the road half comedy, half drama that I don't typically have a ton of patience for, but whether it's the dearth of new releases out at the moment, the right mood on my part, or the film's relaxed charm and the fact that it puts on no airs, but this Al Pacino vehicle won me over pretty quickly. It helps that, though the film has its share of stock/cookie cutter elements, it resists (sort of, but certainly to a greater degree than you have any reason to expect it will) delivering the mushy, hugs all around type ending that films like this tend to demand.

At the beginning of the 1970s, Danny Collins was supposed to be the next John Lennon, an authentic musical voice lauded for his ability to craft songs. By 2015 Danny (Al Pacino) has long since achieved fame and fortune, but he's done so by abandoning his artistic ambition and embracing a more empty kind of pop music, singing songs written by other people and which he detests. If he liked his music, the fact of getting older might be easier to take, but after brushing some color into his hair and squeezing himself into a girdle so that he can continue the increasingly grotesque pantomime of youth now that he's in his 70s, and seeing that his audience has aged along with him (and, arguably, far more gracefully) and loves the very songs he's come to hate, he realizes that he can't take it anymore. His life off stage, which includes copious amounts of booze and drugs and a much younger girlfriend who is about to become his fourth wife and whom he suspects is seeing someone on the side, doesn't do much to alleviate his anxieties. When his birthday comes, his best friend/manager, Frank (Christopher Plummer), presents him with a gift: a letter that John Lennon wrote to him some 40 years earlier encouraging him to stay true to himself as an artist, which Danny never received because a third party intercepted it and sold it to a collector. Although it's come late, the letter nevertheless inspires Danny, who decides to try to fix the mistakes of his past.

As part of that effort Danny packs up and heads to New Jersey, checking himself into a little hotel for an indefinite stay while he tries to write some new songs. The process isn't easy, as he hasn't written anything in decades, but also because he spends much of his time at the hotel trying to convince the manager, Mary (Annette Bening), to go out with him, and trying to play cupid with a young desk clerk and a valet. Ultimately, however, Danny's real reason for going to New Jersey is to meet his now grown son, Tom (Bobby Cannavale), and try to create some kind of relationship with him. This proves even more difficult than the songwriting process, as Tom deeply resents Danny and wants nothing to do with him, but Danny persists and manages to get past Tom's defenses by arranging for Tom's young daughter to gain entry into a special private school designed to address her special needs. When Danny learns that Tom is potentially terminally ill, a fact which Tom is hiding from his pregnant wife Samantha (Jennifer Garner), Danny manages to become Tom's confidant and the witness to the treatments that he is secretly undergoing. For a while it seems like Danny really is turning his life around: he's demonstrating that he's capable of being there for people and that he can be counted on, he's writing new music, he's given up the drugs (if not the alcohol), and he's pursuing a slightly more age appropriate relationship. But it's hard, if not impossible, to turn on a dime and though Danny has good intentions, he doesn't necessarily have the wherewithal to follow through.

While many of the plot turns in Danny Collins (which is kind of, sort of, but not really remotely based on a true story) are familiar from countless other films of this general type, familiarity doesn't necessarily have to breed contempt. Danny Collins knows what kind of film it is and rather than pretending that it's some kind of profound character study, it leans into the inherent sentimentality of its narrative and works with the surface charms of its characters instead of trying to squeeze more out of them than they have to give. While it's true that this makes for thin stuff in the grand scheme of things, that doesn't detract from how enjoyable the film is while you're watching it, even if you know that it's not going to resonate for even as long as it takes to get to the end of the credits. Danny Collins works because it has two big things going for it. The first is that it doesn't go for the cheapest, easiest kind of ending where Danny learns the error of his ways and gets everything he wants. In the end Danny gets some of what he wants (though the way he gets it is messy, befitting the character), but the film acknowledges that life is complicated and that change, particularly changing oneself, can be difficult to achieve. When he goes to New Jersey, Danny's goal is to clean up, to alter the course of his career by going back to his roots, and to make things right with his son. He doesn't get all of that - he tries and then fails at most of it, driven to self-destruction by fear and self-loathing - and that feels more honest than Danny finding a way to make everything work out.

The other big thing is the uniformly good performances of the cast, which gives the film a softness and an easiness that serves it well. Pacino is not an actor synonymous with comedy but he plays well against type here, and though Danny Collins doesn't require him to dig very deep, his performance is often compelling - which isn't something you expect when he shows up on screen looking like a cross between Steven Tyler and Barry Manilow. He has a good rapport with would-be love interest Bening, whose performance is understated but hits all the marks, and he and Cannavale play off of each other well as they navigate the many ups and downs of Danny and Tom's complicated relationship. It's Plummer, though, who ends up walking away with every scene he shows up in as Danny's straight-talking manager who doesn't pretend to sugarcoat things but manages to tell the truth with humor and touches of sharp kindness. Danny Collins might not be brilliant stuff, but in the final analysis it's a fine film with plenty of heart.
Posted by Norma Desmond at 9:46 PM

Great movie with Al Pacino. Story was interesting. All the characters delivers his best performance.