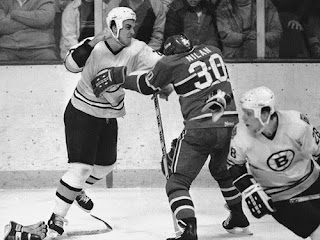 The hockey enforcer. Feared, but not necessarily respected as players, considered either a drag on the game or a necessary part of it, depending on who you ask. In The Last Gladiators the ridiculously prolific Alex Gibney looks at the trials and tribulations of the NHL enforcer, both during and post-career, focusing in particular on former Montreal Canadien Chris "Knuckles" Nilan. A movie like The Last Gladiators is one whose appeal is perhaps limited to those who like hockey to begin with, however, if you're a fan of ESPN's 30 for 30 documentary series, you'll probably like The Last Gladiators as it has a similar kind of vibe. That said, while the film is pretty entertaining, it doesn't dig particularly deep - but maybe that's just a risk a director takes when he releases a new documentary at a rate of several per year.

Although Gibney and the film take a broad overview of the history of fighting in hockey, giving a moment to the legends of the "Big Bad Bruins" and the "Broad Street Bullies," and featuring interviews with former NHL players like Marty McSorley, Tony Twist, Donald Brashear, and the late Bob Probert, who died as the film was being made; the film is primarily devoted to Nilan and his specific story. Growing up in Boston, he describes himself as becoming passionate about hockey thanks to Bobby Orr and the Boston Bruins and dreaming of playing in the NHL even though no one, particularly his parents, thought it possible that he could make it. After playing at the collegiate level for the Northeastern University Huskies and earning a reputation for toughness, he was one of the last players selected in the 1978 NHL draft, eventually being taken by the Montreal Canadiens (so unlikely did his professional playing dreams seem that his mother describes receiving a phone call informing her that he'd been drafted, thinking it was a prank call, and hanging up). After a brief time in the AHL, where he became known for his willingness to take on all comers as a fighter, he was brought up to the Canadiens roster for the 1979/80 season where one of his jobs was looking out for the finesse players who might otherwise be targeted by other teams' goons.

All told Nilan would spent 15 seasons in the NHL, the first nine with the Canadiens, who would win a Stanley Cup during his tenure there, before clashes with the coaching staff resulted in his being traded to the New York Rangers and then the Bruins, before closing out his career back in Montreal for his final season. Known for being a tough guy and brought into the NHL specifically for that purpose rather than for his ability to play the game (the way that he describes his early years with the Canadiens makes it sounds as though he only started being taught how to play the actual game, from skating to shooting, once he was already in the NHL), Nilan is clearly pretty uncomfortable with the experience and idea of himself in that role, having always wanted to be taken seriously as a player rather than just a pair of fists. Though he had felt appreciated and at home as a player for most of his time with the Canadiens, a change in coaching staff left him dealing with people he felt were disrespectful towards him and his passion for the sport seemed to diminish steadily after he was traded from the Canadiens which, in his way of describing where he was at, is understandable. He accepted the role of enforcer out of a sense of loyalty - he was loyal to his teammates so he looked out for them and tried to make sure no one messed with them, and he was loyal to his former coaches so he was willing to get on the ice and scrap if that's what they needed him to do - but in the end didn't feel that loyalty paid back to him. When his playing career ended in 1992, he struggled to find a place for himself, trying and failing at office jobs and coaching jobs, and filling the void in his life with alcohol and prescription pills and, eventually, heroin, which also functioned to dull the enduring pain of the many injuries he sustained in his playing career.

Nilan's story is a sad one, but it's difficult at times to parse out what, exactly, Gibney's point is with The Last Gladiators. Yes, Nilan's job in the NHL was physically punishing and it's apparent how dispiriting it was to him to be valued solely for his ability to lay other players flat on the ice, but the issues which resulted in his troubles with the law and with addictions and his difficulty in finding his place in society seem to have been present before he ever laced up a pair of skates. Before idolizing Bobby Orr, he idolized his father, who was himself a tough guy willing to settle disagreements with his fists, and childhood friends describe him as the type to throw down at a moment's notice if he, or a friend, was being disrespected and picked on. So it seems like he always would have had difficulties in life, and perhaps he would have had even more if he hadn't had hockey to channel that aggression into and get some of it out of his system, and the notion that being given the role of enforcer is psychologically damaging is undercut by interviews with some of the other former players, particularly Tony Twist who still seems rather delighted with the image of himself as someone not to be trifled with.

While it seems (to me, at least) like the ultimate value of players whose skill level in every respect except punching is negligible, I'm not really sure that that's the point the film is trying to make either. That said, while the purpose of the film seemed, to me, somewhat vague, The Last Gladiators is nevertheless an often fascinating film. It's sort of unexpected that a guy known as "Knuckles" would be so witty, let alone that he would emerge as such a sensitive and engaging figure. While The Last Gladiators doesn't really illuminate that much about hockey as a game, it does end up functioning pretty effectively as a biopic about a specific player and his struggles within and beyond the game.
Posted by Norma Desmond at 8:00 AM