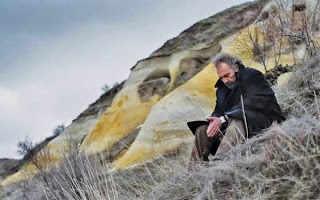 Sympathy for the 1 percent. Nuri Bilge Ceylan's Palme d'Or winning Winter Sleep is the story of a man who has everything - education, wealth, power, and all the typical markings that go along with them - except the one thing that might actually make him happy: the adulation of others. Instead he is quietly despised and doesn't seem to understand how his self-absorption, arrogance, and inability to empathize with other people make it impossible for those around him to embrace him the way he imagines he deserves to be embraced. Winter Sleep is an intimate tragedy played out on an epic scale, and though its 196 minute running time may seem daunting, it's a film which is easy to become absorbed in as its world is so perfectly realized and its protagonist so fascinating.

Winter Sleep is set in Cappadocia, where its protagonist, Aydin (Haluk Bilginer), a former actor who now spends large parts of his days doing research for a book he intends to write about the history of the Turkish theater and writing op-eds for the local newspaper, owns and operates a mountaintop hotel with his sister Necla (Demet Akbag), and his wife Nihal (Melisa Sozen). He also owns several other properties, where less affluent neighbors struggle to make their rent. One of these tenants is Ismail (Nejat Isler), an ex-con who can't find work because of his criminal past and whose son throws a rock through the window of Aydin's truck in retaliation for a collection agency having shown up and taken the television and refrigerator from the home as a result of the rent being past due. Ismail's brother Hamdi (Serhat Kilic), the local imam, tries to smooth the situation over, but everything that he does merely makes Aydin disdain him more, though outwardly he maintains a facade of the benevolent authority figure. Aydin begins to obsess over all the ways that Hamid falls short and uses the space that he's given to write in the local paper to write columns about the proper ways that religious leaders should conduct themselves, though he himself is not religious and has never expressed any real interest in religion before. While Necla openly wonders why Aydin is wasting his time on a small paper that no one reads, and later dismisses it as a shallow intellectual pursuit, Aydin quietly seethes over her failure to stroke his ego and recognize his inherent brilliance (one of the story's great ironies is that the only person who actually does treat Aydin with reverence is rewarded by being the primary focus of his disgust and hatred).

If the relationship between Aydin and Necla alternates between prickly affection and open annoyance, the relationship between Aydin and Nihal is entirely negative. Nihal is much younger than Aydin and has been struggling to find her place and her purpose in the world, something which is made all the more difficult due to Aydin's tendency to disregard Nihal's interests or take over her projects. When she attempts to do charity work by fundraising for developing schools, Aydin at first tells her that the effort is doomed to fail because she doesn't know what she's doing, and then tries to take the project over by offering/insisting on doing the books, and then decides that he'll let her have this after all and tries to make amends by tossing a large sum cash into an envelope as an "anonymous" donation, not realizing that he's already tainted the project beyond salvation in her eyes. More than anyone else, it is Nihal's adoration that Aydin really wants and the fact that the love she once had for him has curdled into hatred, and that he can't seem to understand why, is a torment to him. With the marriage seemingly at the breaking point, Aydin decides to retreat to Istanbul for several months, officially to do some work on his book, but as with everything else in his life, this doesn't work out quite as he planned.

Winter Sleep is a slow film and one in which not a lot happens. There is some sense of narrative structure arising from the storyline involving Ismail and Hamid, who pop up separately and together throughout the film and whose interactions with Aydin, and the people connected to him, underscore the fact that, despite his vision of himself as the magnanimous ruler of his community, Aydin is at best indifferent to the suffering of those of lesser means that his own, and at worst casually hateful towards them and delighting in their humiliations. That Aydin cannot see this side of himself, despite the waves of hostility being directed at him from all around, is part of what makes the film so engrossing. No matter what, his image of himself seems like it just can't be shaken; as far as he's concerned, everyone else is the problem, not him. That the film is so successful in depicting this mindset is due in no small part to the great performance by Bilginer, who ensures that Aydin isn't an overt villain, but something far more subtle, someone whose cruelty is expressed in his most soft spoken tones. It's an engrossing performance that easily carries the weight of (and lends weight to) the story.

Winter Sleep is a meticulously crafted character study, dense in detail and psychology, and stunningly photographed by Ceylan's frequent cinematographer Gokhan Tiryaki. At 196 minutes, it's a film that requires a hefty investment, particularly in its early sections, but once Ceylan begins delving deeper and deeper into the relationships between Aydin and those around him, and exploring Aydin's inner life and the way it conflicts with the reality of his outer life, it becomes entirely gripping. It's an intimate epic which, in the end, completely earns its grand scale through its marvelous performances, tireless attention to detail, and its quietly devastating finale.
Posted by Norma Desmond at 8:00 AM