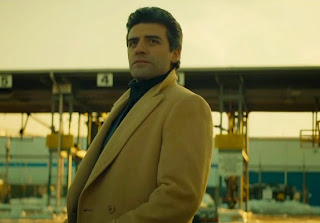 J.C. Chandor's A Most Violent Year is a film about a man who wants to be good in a profession that demands he be corrupt, who wants to keep his hands clean even as they are continuously pulled down into the mud. It is an exceedingly handsome looking film, anchored by a terrific performance by Oscar Isaac playing a complex man at war on all sides - so why does it feel so inert? Chandor's previous film (and only his second directorial effort), All Is Lost, managed to be as dynamic as it was minimalist, stripping away everything right down to the dialogue, but even though A Most Violent Year has more meat wrapped around its bones, it still manages to feel just a bit hollow. It's a competently made, sometimes even compelling film, but its impact just isn't very deep.

Set in New York in 1981, A Most Violent Year centers on Abel Morales (Isaac), the hard working owner of a heating oil company who is just starting to enter the phase where he's able to enjoy some of the fruits of his labor, though that sense of comfort is quickly revealed to be precarious. With the help of his lawyer (Albert Brooks), he makes a deal to purchase a property on the East River, putting down a sizable deposit of his own money to do it, which will help him get ahead of his competitors by making it possible for him to import oil directly from barges and store more of it. However, as his star continues to rise in the industry, the target on his back also begins to get larger. For some time his business has been under siege by hijackers taking his trucks and their valuable cargo, a problem which finally begins to reach its crisis point when Julian (Elyes Gabel), one of his drivers, is beaten and left on the side of the highway. Abel's wife, Anna (Jessica Chastain), whose father is a prominent gangster, encourages Abel to respond to violence with violence, but the timing of such advice couldn't be worse as Abel and his company have come under the scrutiny of Assistant District Attorney Lawrence (David Oyelowo), who intends to make his name by exposing corruption in the heating oil business.

As the hijackings continue, and the attacks become increasingly personal and put Abel and Anna's family directly in danger, Abel and Anna find themselves at odds regarding how to deal with the situation. Abel refuses to arm the drivers of his trucks as Lawrence is circling and waiting for the opportunity to swoop in and raid Abel's operation (which is operating in an even sketchier fashion than Abel thinks, thanks to some "creative" accounting by Anna), while Anna thinks that a show of force is in order. Ultimately, however, the drivers arm themselves out of fear of being attacked and when Julian, returning to the job, is involved in another attempted hijacking, he ends up in a shootout with the hijackers and then on the run from the police. In the result, Lawrence begins putting increasing pressure on Abel, and the bank that Abel was counting on to help him close the deal on his new property pulls out, leaving Abel scrambling to put together the remaining funds he needs and on the verge of ruin.

As photographed by Bradford Young, who was also the cinematographer of Selma, A Most Violent Year is a beautiful looking film that evokes the feeling of New Hollywood era movies and gives the images on screen a sense of having an actual texture that you can reach out and touch. As written by Chandor, it tells the story of a complex protagonist who sees himself as at once above the violent methods engaged in by his competitors, but whose hands are never quite as clean as he likes to pretend (in one scene he desperately hides bankers boxes full of documents while Anna buys some time with Lawrence and the police before they raid the Morales home), and who isn't quite the "self-made" man he presents himself as being or as different from his father-in-law as he claims. The relationship between Abel and Anna can be said to be based in love, but it is also a business relationship and theirs is very much a partnership, one in which Abel benefits from, even if he does not necessarily openly condone, the methods that Anna has picked up from her father. The conflict between Abel and Anna regarding how to deal with the assaults on their business drives a significant portion of the story's conflict, as does Abel's relationship with Julian, who idolizes Abel but who becomes a liability that Abel must deal with once he goes on the run, and whose story becomes one of the narrative's most compelling and fascinating plot threads.

In most respects, A Most Violent Year is a very good film, though it depicts a curiously empty New York in which scenes taking place outdoors are sparsely populated, which in turn has the effect of making the stakes seem lower than they ought to because 1981 was a violent year in New York's history, but here the violence appears to be occurring in a vacuum, with no one affected but Abel and those closest to him. In terms of the film's weaknesses, there are two that really detracted from the overall effect of the film for me. The first is Anna, who isn't a character so much as she's a Character, all claw-like nails, pronounced accent, sharpness and severity both in appearance and manner, a broadly drawn figure played with "bigness" by the usually far more subtle Chastain. While Isaac is allowed to dig deep and turn in the sort of quiet, simmering performance that once defined Al Pacino (a comparison that the film actively invites by framing Isaac in such a way that he recalls a young Pacino), Chastain is tasked with playing a character who only rarely gets to dip below the surface. The other issue is that the film is generally sort of passionless and lacking in urgency. While there are too many good things in it for A Most Violent Year to be considered a bad movie, it never quite musters itself to push past being "good" to become "great."
Posted by Norma Desmond at 8:00 AM