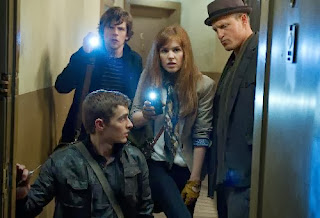 Now You See Me is a good film saddled with a bad film's ending. Right up until its finale, it is an entertaining and engaging caper movie, and then it uses the goodwill engendered by its first two thirds as leverage against the cheap trick it pulls at the end. When a film's twist ending requires the audience to completely disregard everything they've learned about a character, to ignore the way that character behaved even when he or she was alone and had no one (except the audience) to keep up appearances for, it's not clever. It's cheating. A good twist is one which not only makes sense according to the film's internal logic, but which inspires multiple viewings so that you can pick up on all the little hints and bits of foreshadowing leading to the revelation. A bad twist is one which exists solely for the shock value that comes with the first viewing and which, on subsequent viewings, just makes everything leading up to the twist seem dumb. The ending of this film is garbage; the rest of the film is pretty good... so I guess I'm recommending the first 100 minutes and warning against the last 15.

Now You See Me centers on the "Four Horsemen," a group of four street magicians - Daniel Atlas (Jesse Eisenberg), Henley Reeves (Isla Fischer), Merritt McKinney (Woody Harrelson), and Jack Wilder (Dave Franco) - who are brought together under mysterious circumstances to form a team. One year later, with the aid of their benefactor, Arthur Tressler (Michael Caine), they are performing in Las Vegas and, seemingly, rob a bank in Paris during their show. The robbery brings them to the attention of the FBI and Interpol and the four are brought in for questioning by FBI agent Dylan Rhodes (Mark Ruffalo) and Interpol agent Alma Dray (Melanie Laurent), but released due to lack of solid evidence. Former magician Thaddeus Bradley (Morgan Freeman), who now makes his money through DVDs revealing the secrets to magic tricks, is also questioned, having been at the performance, and reveals to Rhodes and Dray how the trick was pulled off.

Rhodes and Dray follow the Four Horsemen to their next show in New Orleans, where their next trick involves draining Tressler's bank accounts and transferring the money into the accounts of members of the audience. Although pursued by Rhodes and Dray, the Four Horsemen escape, and Tressler hires Thaddeus to find and expose the Horsemen in retribution for what they've done to him. Everyone catches up with the magicians in New York, where a high speed chase leads to Jack's death and the remaining Horsemen vow to carry on and finish their mission which, if successful, will earn them entry into "The Eye," a secret society of magicians. With the authorities closing in, the Horsemen put on their last show - and the person who has been pulling the strings reveals his or herself.

Now You See Me is high energy and fast paced and, for the most part, it's a lot of fun. The actors involved all have great chemistry, and the film is well-constructed enough that it effectively juggles a series of different kinds of relationships, from the rivals turned friends relationships between the Horsemen, to the mismatched cops pairing of Rhodes and Dray, and the antagonist relationship that Thaddeus has with pretty much every other character in the film. While most films of this type settle for a two sided "us versus them" story where it's either cops versus robbers, or robbers versus other robbers, Now You See Me is able to tell a three sided story with cops, robbers, and a third party who is an antagonist to both, and it tells it well - right up until the end. I'm going to say a few words about the ending, so if you haven't seen the film yet and want to remain unspoiled, stop reading here.

So, early in the proceedings, Dray figures out that the Horsemen's mission is related, somehow, to the story of Lionel Shrike, a magician who was exposed by Thaddeus thirty years ago and then attempted a dangerous trick which resulted in his death. At the end of the film, it's revealed that Rhodes is Shrike's son, is a member of "The Eye," and was the engineer behind the Horsemen's mission. There are ways in which this ending could make sense, but they all involve rewriting the way that Rhodes is depicted for the first two thirds of the film. His behavior for most of the film just isn't reconcilable with the ending. Further, even if it did make sense, his plot would still hinge on the Horsemen being able to secure Tressler (whom Rhodes also holds responsible for the circumstances of his father's death) as their benefactor which... seems like a pretty big variable. And don't even get me started on the chase which ends with Jack's "death," a miniplot which would seem to depend on everything happening exactly according to plan, without anything going the tiniest bit wrong. All films require you to suspend disbelief a little bit, but Now You See Me really pushes the limits in that respect.
Posted by Norma Desmond at 8:00 AM

In my opinion it was meant to be a well-created movie twist, not a cheap trick of the film. You don't know what you've seen in the beginning, the characters are chosen in a illusive scheme.

And that magic-themed caper is so much in all of the plot illusions and turns to turn in every way.