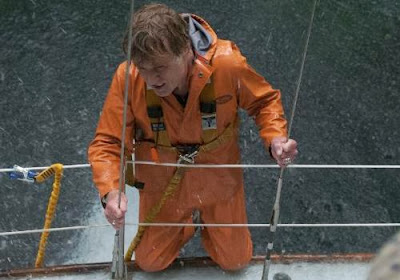 Late in All Is Lost Robert Redford's unnamed protagonist looks up to the heavens and screams the word, "Fuck." He holds out a lot longer than I would have. If the character was based on me, there would be a lot more dialogue because there would be a steady stream of expletives from beginning to end. J. C. Chandor's stark, straightforward tale can be summed up in seven words: "A man struggles to survive at sea." That's pretty much the entirety of the movie, which features only one character, next to no dialogue, and a series of escalating crises that make survival seem increasingly hopeless. In lesser hands this would feel gimmicky, but Chandor's deft execution and Redford's riveting performance make it work.

The film begins near the end, with Redford's voiceover revealing the contents of a letter his character will write once he's reached the point of giving up. It's a letter of apology - we don't know to whom or for what - and it's all the information we'll get in terms of a backstory for the character, who remains unnamed throughout and is credited merely as "Our Man." Flashing back eight days earlier, Our Man wakes on his sail boat to discover that he's collided with a shipping container in the night, putting a gaping hole in the side of his boat. He dislodges his boat from the container and spends the next couple of days patching up the hole as best he can, and pumping water out of his boat. His radio has been damaged and he's unable to fix it to call for help, though for an agonizing minute it looks like he might succeed in doing so. Instead he's forced to carry on on his own, girding himself as the skies darken in the distance and he sails into a storm.

The storm - so violent that at one point it turns his boat entirely upside down - is so strong it probably would have wrecked a perfectly intact boat and it effectively finishes off his, ripping the hole back open and making it unsalvageable. In the midst of the raging wind and rain he manages to inflate a lifeboat and escape to it, waking in the morning ("coming to" might be a better term, as he hits his head during the storm and probably has a concussion) to find his sailboat slowly sinking. He returns to it long enough to get any further provisions that haven't been damaged by the water, and which he can haul out before the ship sinks completely, and then settles into the lifeboat, waiting for whatever happens next. Although he's already had more adventure than most people could take, several more things happen while he's in the lifeboat including, but not limited to, having sharks circling around beneath him, and discovering that the jug of water he took pains to get onto the lifeboat has been contaminated by salt water. More days pass and things look bleak. As he says in his goodbye letter, "All is lost."

All Is Lost is essentially all action, whether it's the big action of the storm sequence, which is of such high velocity and intensity that it will leave you breathless, or the smaller actions of Our Man going about the tasks of survival, from patching the ship, to navigating the map, to coming up with increasingly creative solutions to the many problems that he encounters. All the technical elements come together perfectly; Chandor's direction is steady and assured, the editing by Pete Beaudreau is crisp, and Frank G. DeMarco's cinematography lends the film both beauty and a sense of the sinister. There's something incredibly disconcerting about the early scenes, when Our Man is dislodging his boat from the container and there's a bunch of shoes from the container floating in the water and drifting in and out of the sailboat. It's creepy, and so are the scenes shot from underneath the lifeboat as fish and later sharks go about their business under the surface of the water, nothing but a short distance and a bit of rubber separating them from Our Man. Although the storm sequence is the most action heavy and relentless, making survival seem, at times, utterly impossible, every scene is imbued with it's own particular sense of dread, and because there are so few words spoken, other sounds take on special prominence. From thunder clapping in the distance, to the ship's deep groaning as it sinks, the sound of the film does a great deal to establish the sense of isolation and hopelessness the character begins to feel.

As I said, we never learn much about the character except that he feels an unnamed guilt for how he's failed the person or people he's left behind, and that he's capable enough to keep on going through a series of disasters, creating solutions on the fly (though not always, necessarily, great solutions; his final attempt to save himself struck me as dumb, but at that point I guess he was pretty desperate). Redford says next to nothing from the beginning to the end of the film, but nevertheless manages to convey a lot about the character of Our Man, giving us a rooting interest in his survival even though we know nothing of his life. Redford is likely to receive many accolades for this performance, probably even an Oscar nomination, and it's much deserved because I can't think of many actors who could so thoroughly hold the attention for so long with such a minimalist performance.
Posted by Norma Desmond at 8:00 AM

Good review Norma. Redford is amazing in this and commands the screen every step of the way, even without saying anything too! He will most likely get an Oscar nomination, as he totally deserves it. Not just for the exceptional work he puts in here, but for the whole career he's had leading up to this one moment in time.

Well, he's already got an Honorary Oscar for his career up through 2001, but it's kind of amazing that he's only ever been nominated once for his acting (for The Sting).