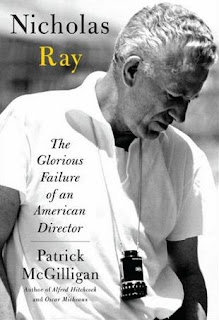 Was he an under appreciated genius betrayed by the Hollywood system, or was he a talented but over praised artist who made two bad films for every good film and sabotaged his career at every turn? If you listen to the French (Godard famously said, "The cinema is Nicholas Ray"), you'll come away thinking its the former, but Patrick McGilligan's biography will leave you leaning towards the latter. Though the book can be a bit dry and gets a repetitive towards the end, when the director's demons really start to take over, it is also a meticulous accounting of not just how Ray made his films, but the filmmaking process in Hollywood in the 1950s - with all its frustrating backstage politics - in general.

Ray's road to filmmaking was a long one, one which in this accounting seems to have ended in directing almost as a last resort. Although Ray's earliest ambition was to be an actor, throughout the book you get the sense that what he really wanted - and what remained just out of reach - was to be a success as a writer. Even after he attained his status as a Hollywood "auteur," credit as a writer always seemed to elude him, perhaps because he was more of an "idea guy" than a sit down and do the work guy. Although McGilligan depicts him as a generous collaborator who viewed filmmaking as a collective process of give and take between directors, writers and actors, Ray does come off as being a bit flighty, full of half-formed ideas that he can never quite bring to fruition, particularly towards the end of his career when drinking and drugs had taken their toll on his ability to focus and work. One of the most striking things about the book is the disconnect between how the French New Wave critics turned filmmakers considered Ray as an artist almost without peer, and McGilligan's portrayal of him as almost a dilettante whose greatest talent was, perhaps, rewriting his own narrative with the benefit of hindsight and in order to fit in with the assessment of him that came from Europe.

This isn't to say that McGilligan is terribly harsh on Ray, as time and again he returns to the fact that Ray did have talent and that, in addition, he was well known for being one of the nicest guys in Hollywood (except for that time he testified for HUAC and falsely named his first ex-wife). Ray's abilities as a craftsman, particularly his ability to take a project that was subpar on a script level and transform it into something exciting by thinking outside the box and bringing a different kind of visual flourish to it, is acknowledged, as is the fact that studio interference often corroded Ray's efforts to raise the material. Still, the impression left by the book is that Ray was less an artist of singular vision than a journeyman director who could produce something amazing just as often as he could produce something borderline mediocre. As depicted by this biography, Ray was a man genuinely excited about a couple of his projects, but bored by many of them as the interference of the studios limited his ambitions, which resulted in him not really trying. Ray's story is tragic in many ways but there's a degree to which his failure is portrayed as being the result of the weakness of his ambition and inability to endure opposition.

The Glorious Failure of An American Director is a bit of a mixed bag to read, often fascinating, but sometimes a bit of a slog. The level of detail McGilligan delves into with respect to Ray's professional life is impressive but sometimes terribly dry, particularly during the long stretch of the book which leads up to Ray's first foray into filmmaking and Hollywood. Also, while it's admirable that McGilligan sticks mainly to talking about the art rather than fixating on the more prurient details of Ray's private life, it's a little strange that such a detailed biography skips over what is easily the most interesting thing about Ray's private life, which is the fact that his marriage to Gloria Grahame ended as a result of her affair with his son from his first marriage (who later became Grahame's fourth husband). The book acknowledges the affair very briefly, because there's no way not to, but it has very little interest in the situation in spite of the fact that it's fucking crazy. I mean, seriously, what was that all about? You won't find out here, but you'll find out a lot about Ray's high school days so... fair trade off?

Next Month: Down and Dirty Pictures
Posted by Norma Desmond at 8:00 AM

Hi! I've nominated you for a blogger award. The link won't be live until 5pm Tuesday though.

I miss my old film blogging days (I had Final Cut) and would love it if you would check out the film section of my blog or the guest posts I write for aliljoy.