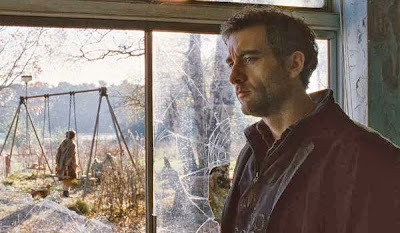 Stories about dystopias always begin from a place of despair, a despair that is set in and normalized but not, as it turns out, completely devoid of hope. Children of Men, on the other hand, begins from a place of utter, inescapable hopelessness, set in a world where humanity has seen its last generation and knows that the end is inevitable. If humans cannot reproduce, then it doesn't matter whether or not evil and corrupt systems are overthrown because, no matter what, extinction is fast approaching. There's nothing ahead except the final descent into violence and chaos and those people who still live in "stable" nations look on blankly while the government becomes increasingly militarized, increasingly brutal, and the last vestiges of humanity slaughter each other. It's a bleak vision brought painfully, frighteningly to life in one of the greatest science fiction films ever made, by a director who is proving himself to be one of the most vital and important filmmakers working today.

Set in Britain in the year 2027, Children of Men depicts a government given over to totalitarianism, the streets crowded by caged refuges, the military clashing constantly with dissident groups such as the Fishes, an immigrant's rights group. The protagonist is Theo (Clive Owen), a government worker who has become accustomed enough to the horrors of his reality that they barely register with him, and whose connection to a government minister makes him a valuable asset to the Fishes. The group - under the direction of its leader, Julian (Julianne Moore), who was once married to Theo - kidnaps Theo and makes an arrangement to exchange money for transit papers for Kee (Clare-Hope Ashitey), a young refugee. The papers received, Kee must be transported to the coast where she is to board a boat belonging to the Human Project, a scientific group working towards finding a cure for infertility, but things go awry when the transport group, which includes Kee, Theo and Julian, as well as Luke (Chiwetel Ejiofor) and Miriam (Pam Ferris), is ambushed and Julian is killed. Discovering first that Kee is pregnant, and then that Julian's murder has been orchestrated by the Fishes as part of a plan to use Kee's child as a tool for revolution, Theo flees with Kee and Miriam, determined to carry out Julian's plan and get Kee and her child to safety.

The trio are pursued by the Fishes, lead by Luke, managing to stay one step ahead of them thanks to arrangements made by Theo's friend, Jasper (Michael Caine). The danger presented by the Fishes, however, becomes the least of their worries as they sneak their way into a refugee camp disguised as prisoners and Kee goes into labor. Masking Kee's condition as best they can - and, in Miriam's case, sacrificing herself in order to do so - they slip into the refugee camp and Kee gives birth to the first child born on earth in 18 years. As the camp becomes a war zone with the Fishes, the army, and factions of armed refugees attacking each other, Theo and Kee must navigate the dangerous terrain with her newborn and make it out to sea in time to meet the Human Project - and before Luke and his people, or any other opportunists seeking a means of gaining power, can get hold of Kee and her baby.

It's the look of Children of Men that hits you first, the grey color pallet, the desolate landscape, but most of all the visible connections between its world and our own. Children of Men presents an extreme view, but one which does not seem enormously removed from our own, one which seems, in fact, like no more than a few crucial steps away from democracy. The climactic scenes set in the refugee camp, as various groups shoot and bomb each other, takes on the look and feel of a contemporary war zone, the sequence unfolding in cinema verite style and calling to mind news and documentary footage of contemporaneous conflicts such as Iraq, and past conflicts such as Bosnia. The sequence has a visceral, realistic feel to it, the intensity broken only briefly when Kee and her baby make their appearance and the violent impulses of the combatants gives way to shock. There's a fragile serenity to this moment - hope has returned and made its appearance in the most unlikely place - but a moment is all that lasts. Hope is quickly forgotten and the fighting gets back underway, humanity having gained too much momentum in the direction of destruction to stop itself.

Like Gravity, Cuaron's most recent film, Children of Men has religious/spiritual overtones that can't be ignored. Not only do Theo and Kee take on Joseph and Mary type roles (Kee's pregnancy is impossible and she jokingly refers to it as a virgin birth, and the reveal of Kee's pregnancy alludes to the Nativity), but the film's finale brings to mind Noah and the flood. Humanity is too far gone to be saved, so far gone that a flood isn't even required because humans will wipe themselves out, and the last remnant of life and the potential of continuing life escapes on a boat. This is the end of humanity, but it's also a reset, a means of giving humanity another chance free of the baggage of a poisoned history. Though most of Children of Men is disheartening and depressing, in the end there is that small shred of hope. We don't know if Kee and her baby and the Human Project will make it, but that hope - made all the more powerful by the bleakness that surrounds it - is there, strong and clear and resonant, just like the film itself.
Posted by Norma Desmond at 8:00 AM