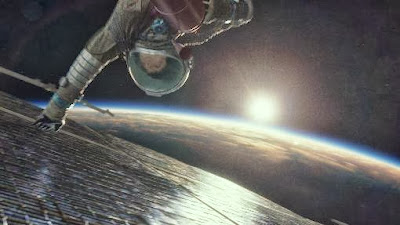 I don't like 3D. I've said so before and I'm saying it again, and the reason I don't like it is because 99% of the films released in that format have absolutely no business being 3D, their sole purpose in using the technology being to pad box office receipts. Alfonso Cuaron's Gravity is a film that belongs in the 1%, a masterwork that uses the technology as it should be used, creating new cinematic vistas and giving the audience something it's never seen before. But the film is not just a technological achievement. It has a strong, well-told story, great performances, and thematic depth that will make it compelling in 2D as well but, man, do yourself a favor and see it at least once in 3D.

In a way, Gravity tells a very simple story. Three astronauts, including medical engineer Dr. Ryan Stone (Sandra Bullock), on her first space mission, and Matt Kowalski (George Clooney), a veteran astronaut, are on a spacewalk when the debris of a destroyed Russian satellite kicks off a chain reaction which sends destruction directly towards them. Their shuttle is destroyed and the third astronaut killed and the two survivors must make their way to the International Space Station before the debris makes its way back towards them. Tethered together, the two begin the trek on the strength of Kowalski's thruster pack, Stone's oxygen running dangerously low. As they approach the ISS, disaster strikes and Kowalski sacrifices himself so that Stone can have a chance to get herself back to Earth. In order to do so, she'll have to board the ISS, use the Soyuz module (useless to transport her back to Earth because its parachute has already deployed) to transport herself to a nearby Chinese space station, and then use that station's Soyuz-like module to evacuate to Earth.

Gravity's story is one of a journey from Point A to Point B to Point C to Point D, told in quick succession with escalating tension as just about everything that could go wrong does go wrong. Although a lot happens, the story itself is lean and without unnecessary diversions. During their long trek from their ruined shuttle towards the ISS, Stone relates a tragic backstory (one which, contrary to convention, provides her with a reason why she might feel she has nothing to live for) but the character details are kept largely to a minimum. Gravity is a story about survival, plain and simple, and there's little time for anything else as Stone contends with various crises ranging from running out of oxygen, bits of debris hurtling towards her through space, a fire on the ISS, the Soyuz getting tangled up with the ISS thanks to the cables of its parachute and then proving to have other problems as well, and several other issues including the fact that even if she gets to the Chinese station and it still has a pod that she can use to get back to Earth, the only experience that she has in landing is from simulators and, as she reveals to Kowalski, she always crashed those. When she declares, mid-way through the film, "I hate space," you can really see her point.

And yet, space, for all the dangers it throws the characters into, is rendered with impossible beauty. As Kowalski drifts into the void, he marvels at the beauty of the Earth, which seems both remote and achingly close. Sequences in which Kowalski and Stone watch the sun rising from far above, or shots in which Earth appears as a beautiful blue orb reflected in their helmets, are gorgeously rendered by Cuaron and his cinematographer, the great Emmanuel Lubezki. What sets Gravity apart, however, it not just the beauty of the images it captures, but the way that it forges a whole new language of motion and movement onscreen. Cuaron and Lubezki absolutely make the most of the film's setting and technology, playing around with point-of-view (there's a fantastic shot which begins outside of Stone's helmet and then slowly moves in, until the camera is looking out from her POV) and with where and how characters are fixed in relation to each other in the field of vision. Even in its most action packed sequences, when things are blowing apart and the wreckage is flailing this way and that, the camera moves gracefully, ballet-like through space, the calm in the midst of disaster and panic. I cannot fathom that Gravity won't make its presence known in the technical categories of this year's Oscars.

Thematically speaking, the film is very much about faith, the loss of it and the rediscovery of it. This notion is emphasized in a line from Kowalski as he urges Stone to keep reporting to NASA, explaining that just because she can't hear them, doesn't mean they can't hear her, thus transforming her monologues into a kind of prayer. She enters the story as someone who has lost her sense of purpose, who tells Kowalski that when she's on Earth she just drives around when she's not working, the tragedy in her life having left her at a loss as to what else to do. She is, in a sense, as untethered on Earth as she becomes in space and the film's assertion right at the beginning that "life in space is impossible" could also be used to describe life of Earth, with its violent man-made conflicts and its random, unpredictable tragedies courtesy of nature. Stone has lost faith and so her journey is not just one of physical survival, but one of rediscovery/rebirth, elegantly (if not necessarily subtly) indicated by the shot of her floating in the fetal position once she reaches the ISS. The story is not just about living, but about finding the will to live after trauma and the tight, intense storytelling combined with Bullock's compelling performance bring that home. A lot of movies collapse beneath the weight of their hype, but Gravity is one that absolutely lives up to it.
Posted by Norma Desmond at 8:00 AM