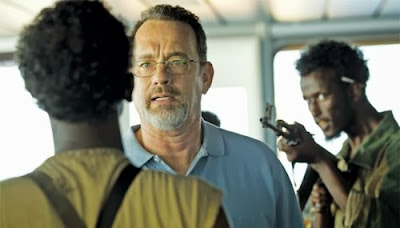 With razor sharp precision, and an absence of proselytizing, director Paul Greengrass dramatizes the politically charged events of 2009, in which four Somali pirates hijacked the American container ship Maersk Alabama, an incident brought to a close with the intervention of the Navy SEALs and the deaths of three of the pirates. Although a story like that could easily be reduced to an "Us vs. Them" type narrative, the film is a lot less interested in taking sides than it is in exploring the mechanics of the event in all its intensity. Captain Phillips is one of the most engrossing films of the year, a gripping thriller with two marvelous performances at its center. This is absolutely a must see.

The sense of foreboding in Captain Phillips is established early, during a quick contrast between the way of life of its eponymous character (Tom Hanks) and his narrative mirror, the Somali pirate Muse (Barkhad Abdi). The former lives with his wife (Catherine Keener) in a decent home and, though they worry that the world is changing too fast and becoming too competitive for their children to be able to find their way, they appear to live a fairly comfortable existence. By contrast, Muse's world is one where poverty is the norm, where no one has enough food, and everyone is at the mercy of local warlords who demand the money that comes from hijacking and ransoming international ships. In Muse's world, there is no hope of escaping poverty, just the hope of being slightly less poor. When the scales are so unevenly balanced, something has to give, and as the Maersk Alabama comes through the Gulf of Aden, Phillips and his crew find themselves confronted by two skiffs carrying four armed pirates each. The Maersk Alabama takes some evasive action, but it seems to be luck more than anything that stops the attack. Phillips fakes a communication with the US, making the pirates, who are listening over their radio, think that a defensive strike is on the way and which prompts one skiff to turn around and head back to the mother ship. Meanwhile, the other skiff, captained by Muse, blows its engine and can't continue the pursuit.

Although they've evaded attack, no one on the Maersk Alabama is resting easy, all now keenly aware that they won't be safe until they reach port. After regrouping and getting a better skiff, Muse's group comes back, this time successfully boarding the ship and taking Phillips and two other crew members hostage on the bridge, while the rest of the crew hides below deck. What unfolds is a standoff between two captains, not unalike in many ways, particularly in their singular determination. Phillips just wants to get the pirates off the ship, Muse just wants to get as much money as possible - more, certainly, than the $30k that's onboard. Although Phillips will later characterize Muse's decision as stemming from greed, the film's opening establishes that the issue is more one of survival. He might end up dead by pushing his luck on the ransom, but if he goes back home with less than the warlord expects, he's probably dead anyway. The situation on the Maersk Alabama becomes increasingly critical until one of the pirates is taken prisoner by the crew below deck. A deal is struck which will allow all four pirates to leave the ship in a lifeboat, but at the last moment they force Phillips to come with them, intending to take him back to Somalia and ransom him from there. What Phillips understands, and what the pirates either can't or won't see, is that the US isn't going to let the lifeboat get to Somalia and that it's already all over except for the bloodshed.

One of the many strengths of Captain Phillips, adapted from the book by the real Phillips by screenwriter Billy Ray, is that it acknowledges the socioeconomic factors involved, but does not belabor the point. In addition to the contrasting sequences which open the film and establish the two captains, there's also Phillips' remarks early in the film that the pressure to do jobs faster and cheaper is only increasing (the film doesn't say it in so many words, but "faster" and "cheaper" also usually means "more dangerous"), and Muse's assertion later on that the prevalence of commercial fishing ships from wealthy nations in waters off Somalia have decimated the local fishing industry. When Phillips implies that that's no excuse, saying, "There's gotta be something other than being a fisherman or kidnapping people," Muse replies, "Maybe in America, Irish. Maybe in America." And that's absolutely, brutally true. Opportunity does not exist in equal measure in all places in the world, or to all people within those places. Although the film does not excuse the actions of Muse and his cohorts, it certainly acknowledges the way that limited opportunities, and the exploitation of the developing world by the developed world, have made incidents like the one portrayed here inevitable.

All that being said, the film infers more than it states outright, as it's got far too much going on to devote any time to editorializing. Greengrass is well known for the efficiency and intensity of his films, and this one is no different, as it leaves absolutely no fat to be trimmed and zips along for 134 minutes, the pace becoming downright breakneck during the third act. That section of the film, which traps Phillips inside a covered lifeboat with his four captors while the US Navy attempts to negotiate him out of the situation, is both claustrophobic and absolutely exhilarating, among the best film sequences of the year (and, yes, the "really good" part of the filmgoing year is just starting, but I feel confident this statement will hold true).

As the two captains, Hanks and Abdi are a study in contrasts, but also in deep-rooted similarities. As depicted in the film, these are two men who possess the skill to be in charge, but not necessarily the force of personality needed to be liked by their crew, or wholly respected. Before the pirate attack, Phillips is depicted as a bit of a killjoy whose appearance in the break room brings about the end of friendly banter, a man too serious by half. Muse, meanwhile, literally fights with another pirate early in the film, and spends the rest of it figuratively fighting his crew, trying to keep them in line while the situation spirals further out of control. Both actors deliver fantastic performances, Abdi's an electrifying debut, Hanks' a solid and surprisingly vulnerable turn which makes his character's rescue seem even harder to watch than his capture. Simply put, this is a great movie.
Posted by Norma Desmond at 8:00 AM