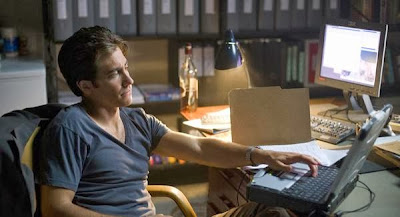 This time my Top 10 recommendations included the following movies: Get the Gringo, Listen to Your Heart, Rendition, Retreat and Down Periscope. I went with Rendition, a film featuring a trio of talented actors, and which I vaguely remembered as one of several "war on terror" themed prestige films to come out in 2007 without making much in the way of a lasting impact (the other films were Lions for Lambs, In the Valley of Elah, and Charlie Wilson's War). Having now seen it, I understand why it didn't make much of an impact. This is a film that presents as a work of political import which aims to hold the US government accountable for dangerous and ugly policies, but which, on close inspection, does quite a bit to uphold the values which it supposedly abhors.

Rendition begins with a suicide bombing in a place generically referred to as "North Africa" (even news reports in the film refer to the location as "North Africa," which strikes me as insufficient reporting, at the very least) which results in the death of a CIA analyst and results in his junior, Douglas Freeman (Jake Gyllenhaal), being temporarily promoted to his job. It also results in the detention of a chemical engineer named Anwar El-Ibrahimi (Omar Metwally), on his way back from a conference in South Africa to his home to Chicago, where he lives with his pregnant wife, Isabella (Reese Witherspoon), their young son, and his mother. After a brief interrogation in the States, the order comes down from Corrine Whitman (Meryl Streep) to transfer him to a CIA black site for some enhanced interrogation, where his interrogator will be Abasi Fawal (Yigal Naor), a police official who was the target of the terrorist attack. Freeman, meanwhile, is assigned to observe the interrogation on behalf of the CIA, which he comes to find increasingly distasteful.

Back in the States, Isabella is trying to get answers about her husband, whom she has been informed never boarded his plane from South Africa, even though she has proof, in the form of their credit card statement, that he was on the plane and made a purchase during the flight. She takes her information to her friend, Alan Smith (Peter Sarsgaard), who works as an aide to Senator Hawkins (Alan Arkin) and uses his connections to try to get information on her behalf. He quickly comes up against a brick wall, however, in the form of Whitman and, to a lesser extent, in the form of Senator Hawkins' unwillingness to make a stand against extraordinary rendition in a political climate where the majority still believes that any means are reasonable when it comes to dealing with terrorist threats. He may not agree with the practice of rendition, exactly, but he's not willing to take a stand against it if he's going to be the only one doing so. Fearing for his career, Smith gives up and disavows his involvement, leaving Isabella to carry on the fight on her own.

Written by Kelley Sane, Rendition contains a lot of speeches; the speeches, really, are its purpose for existing. There's a speech from Whitman in which she coldly justifies the "at any cost" attitude towards the war on terror, a speech from Hawkins justifying his passive collaboration with the practice of extraordinary rendition, and a speech from Freeman in which he demands solid evidence that torture has proven to be an effective tool for gathering intelligence, asking for "anything that outweighs the fact that if you torture one person, you create ten, a hundred, a thousand new enemies." The characters are drawn starkly as heroes and villains, the former crusading to hold those in power accountable, the latter abusing their power because the politics of the moment allow them to. There's not a lot in the way of complexity here and, to make matters worse, the film's racial politics are at odds with its ostensible message. Consider the following: the man mistakenly detained for terrorism is light-skinned and Americanized, with a blonde, all-American wife, while the actual terrorist whose bomb explodes at the beginning of the film is darker-skinned and native to whatever "North African" country is acting as the setting for half the film; the CIA is represented by Freeman who is only supposed to be there to observe but who, at several points, orders the torture to cease and then at the end defies orders and breaks El-Ibrahimi out of prison, while the torture itself is carried out by Fawal, who has nothing even remotely resembling Freeman's crisis of conscience; the attack at the beginning of the film, though it results in the death of one American, is not in response to US policies, but comes as a result of Fawal overseeing the torture and death of the bomber's brother. Although Rendition says that it's about holding the US government accountable, in actual practice it's just endorsing the same jingoistic, xenophobic attitudes it wants to be arguing against. This is a story about "bad brown people" and white people who, when they aren't noble, are merely lacking in the courage to stand up against what they know to be wrong - with one notable exception in the form of the southern-twanged (which I believe is meant to be short-hand for "Republican") Corrine Whitman, a character so cartoonishly evil that she barely registers as a human being, even in the hands of someone as gifted as Streep.

Superficially, Rendition has the elements of a good film, but all it's ultimately interested in is the superficial, which does the subject a great disservice. It constructs straw men to argue for the position that it ostensibly wishes to battle against, a practice which would only diminish the very solid moral and political arguments against extraordinary rendition even if Rendition didn't utterly fail to make the argument it sets out to make. The scenes of torture, in which Freeman stands to the side, alternately begging El-Ibrahimi to give up information so that the torture will stop and wincing along with him while he's waterboarded and electrocuted, while Fawal participates dispassionately in the torture, gave me a renewed sense of appreciation for the complexities of Zero Dark Thirty which, despite controversy surrounding its message, at least had the courage to acknowledge the CIA's active participation in torture. Rendition does little more than pass the buck, which makes its finale, where the bad people get their comeuppance in various forms, ring totally hollow.
Posted by Norma Desmond at 8:00 AM

Yeah, this was a pretty bad film. NetFlix Recommends is stupid.

And for the record, I would've chosen Down Periscope because at least that film is pretty damn funny.

I'll keep that in mind if Down Periscope makes a future appearance in the top 10.