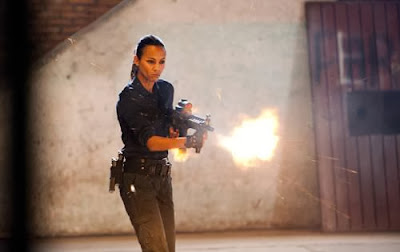 The Netflix algorithms are curious things. After reviewing my viewing choices for the last two months, I'm convinced that their "Top 10" recommendations are chosen entirely at random and with no regard for who they're being recommended to. My own top 10 contained the following 8 movies (2 of the selections were TV shows): Colombiana, Green Lantern, The Next Three Days, Ironclad, Battle: Los Angeles, Predators, Retreat and Robin Hood: Men in Tights (one of these things is not like the others). Of those choices, 2011's Colombiana seemed the least objectionable, and that's how I ended up spending a couple of hours watching this profoundly silly revenge flick. Star Zoe Saldana certainly has the charisma to carry a movie - maybe next time the movie will help her out a little bit.

Saldana stars as Cataleya, who as a girl in Colombia witnesses her parents be killed by the henchmen for the drug lord Don Luis Sandoval (Beto Benites) and then flees for her own life, making it the US Embassy and trading a chip given to her by her father, and which contains valuable information, for a passport to the US. Once there, she gives her handler the slip and gets to Chicago, where she finds her uncle Emilio (Cliff Curtis), who takes her in and, reluctantly, agrees to train her to be an assassin. Fifteen years later, a now grown Cataleya has a series of kills under her belt and has come to the FBI's attention due to the "tag" she leaves on each of her victims, drawn in lipstick. However, it's not the attention of the authorities that she wants - it's Don Luis. Although she takes contracts arranged by Emilio, she's been systematically killing all the men involved in her parents' deaths as a little side project. When Emilio finds out, he's less than pleased but, of course, a guy who trains a 9 year old to kill people doesn't exactly have a lot of authority to elect himself the voice of reason.

Don Luis, now hiding out in the US thanks to a deal with the CIA, realizes that Cataleya is coming for him and sends his henchmen out to cut her off at the pass. Meanwhile, the FBI, led by James Ross (Lennie James) is slowly closing in on her, thanks in no small part to dumb luck. Cataleya's sort-of boyfriend, Danny (Michael Vartan), takes a picture of her while she's sleeping with his phone, which a friend of his sees and decides to send to his sister-in-law, a police clerk, so that she can help find some information about Danny's mystery woman. Her search pings alarms in Ross' investigation, leading him directly to Cataleya and resulting in an assault on her home by the SWAT team. She escapes, however, and after learning the whereabouts of Don Luis, brings her plot for vengeance directly to his door.

Generally speaking, I'm willing to give action movies a fair bit of leeway when it comes to things making sense, but there are just so many dumb things going on here that I have to point some of them out:


* During the chase through Bagota at the beginning of the film, head henchman Marco (Jordi Molla) admonishes one of his cohorts for shooting at Cataleya because they need her alive. Minutes later, when Marco starts to catch up with Cataleya, what does he do? He shoots at her, of course. If I was the guy he yelled at, I would be super pissed about that.

* Cataleya performs a hit inside police cells. She does so by getting herself arrested for DUI and then, once alone in her cell, slips out of her clothes and into a skin tight suit so that she can crawl through the air vents. For some reason, she has to take off her bra to do this. While you could argue that the suit was too skin tight to allow for the bra, consider that she nevertheless manages to bring the lipstick she uses to tag her victim. Let's not speculate about where she kept the lipstick hidden.

* Despite the fact that the killer uses lipstick to tag the victims, when Ross and his team are going through the list of all the people who were in and out of the police station at the time of the hit, trying to find out who the killer is, he dismisses a picture of Cataleya, stating that they aren't looking for a woman. Dude, are you even trying?

* Cataleya finds out where Don Luis is by following Ross to his meeting with Don Luis' CIA contact. She calls Ross on his cell, threatens to assassinate the CIA agent, proves she's capable of it by firing a warning shot, and gets the information and heads off to New Orleans. From Chicago. And when she gets there, not only is Don Luis still there, no law enforcement is there. In the time it took her to drive from Chicago to New Orleans, no one in the CIA or FBI could have made a phone call?

* Don Luis escapes from Cataleya - or so he thinks. He only realizes when it's too late that the van he's fled in also contains Cataleya's two attack dogs, whom she gives the order to kill via speakerphone. Laying aside the fact that for this to work depends on variables such as Don Luis taking that vehicle, and Don Luis choosing to put his phone of speaker when she calls him (not to mention questions of when Cataleya had time to put the dogs in the van between shooting rockets into Don Luis' lair and killing various bad guys), she's essentially just euthanized those dogs by ordering them to maul Don Luis to death and then leaving them, and the body, for the police to find. Am I really supposed to root for a character who does that to her dogs?


Anyway, these things would be slightly more forgiveable if the film was just a little bit more competent. There's a rooftop chase scene at the beginning of the film which is completely lacking in tension because there's no way to tell where Cataleya is in relation to the people chasing her, and Cataleya's big fight scene with Marco in the finale falls a little flat because it just goes on forever and occurs as a long series of quick cuts rather than as one fluid scene of action. Saldana is solid as an action star, but the film itself never rises above the level of dumb fun.
Posted by Norma Desmond at 8:00 AM