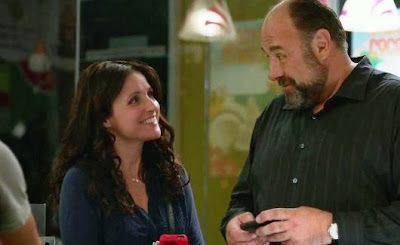 Enough Said is a film where people say too much to the wrong people and not enough to the right people, where communication continuously fails despite the amount of talking the characters do. It's a romantic comedy with a few dramatic turns, at times laugh out loud funny, but also poignant and touching. While many comedies fail because their plots force their characters to behave as no real human beings would, there's a ring of truth to Holofcener's characters and the way they interact, even when the plot construction starts to force itself in on them. Although earlier this year the Hollywood Reporter declared the romantic comedy dead, this utterly charming and delightful film proves there's still some life left in the genre.

Julia Louis-Dreyfus stars as Eva, a masseuse and divorced single mother whose life is about to enter a period of transition as her daughter, Ellen (Tracey Fairaway) prepares to go off to college. When Eva's married friends Sarah (Toni Collette) and Will (Ben Falcone) take her to a party, she meets two people: Marianne (Catherine Keener), a poet who becomes a client and then a friend of Eva's, and Albert (James Gandolfini), a man for whom she initially feels no attraction, but with whom she agrees to go on a date nevertheless. Although she remains on the fence about Albert at first, she decides that she likes him enough to move forward, bonding with him over uneasy relationships with ex-spouses, the impending departure of daughters to college, and similar senses of humor. As their relationship begins to progress, so too does Eva's friendship with Marianne, whom she comes to realize is Albert's ex-wife. Keeping her connection to each a secret from the other, Eva uses her friendship to gather reconnaissance for her relationship.

Things with Albert are ostensibly good, but Eva is aware from past experience that what's good at the beginning of a relationship can become the thing that sinks it in the end. Habits and eccentricities that seem harmless at first can come to seem insurmountable towards the end, and with her access to Marianne and her bitter feelings about Albert and his many shortcomings, Eva comes to believe that she's already advanced towards the end. She slowly starts to adopt Marianne's feelings towards Albert and no longer trusts whether or not she genuinely likes him. Part of the problem, of course, is that Marianne becomes an aspirational figure for her - an artist who lives in a perfectly ordered and decorated home, grows herbs Eva has never heard of, is approached by strangers who inform her that her work "saved" them, and is friends with Joni Mitchell. Eva's friendship with Marianne is more hero worship than anything else and when she's examining Albert's supposed flaws and trying to decide whether or not he's right for her, she loses sight of the fact that she isn't Marianne.

Although Enough Said has a plot that could come from a playbook, relying as it does on that little piece of contrivance that Eva's new friend and potential boyfriend were once spouses, what makes the film work is that it doesn't let the plot lead. It starts with the characters, who are drawn with a keen eye and who have flaws and behave badly sometimes, but are ultimately all likeable, believable people whose motivations can be understood, even if they don't necessarily always understand them themselves. Eva is plagued with self-doubt because she can't reconcile herself to the fact that she was once married to someone who is now a virtual stranger to her, whom she now can't imagine being in a relationship with. She doesn't want to find herself in that position again and, as a result, she doesn't trust her own judgment. She likes Albert now, but how will she feel later? She has her own experience to go by, she has her knowledge of Marianne's experience, and she also sees how Sarah and Will interact, which is not always with a great deal of kindness, so it's easy to see why she wants to err on the side of caution and not take the chance. But human beings have a need to connect, which the film shows over and over again with its many different kinds of relationships, from the central romance, to Eva's friendships with Marianne, and Sarah and Will, to Eva's tricky relationship with Ellen and Ellen's best friend. What's great about Holofcener's screenplay is that it takes the title to heart - it doesn't overwrite and it doesn't belabor the point; it presents a series of well-realized characters and relationships and trusts the viewer to make various connections without them having to be explicitly spelled out.

While Enough Said finds a great deal of strength in its screenplay and direction, it finds even more in its performances. Gandolfini may have made his name playing a mob boss, but he excels here as a man who might best be described as a teddy bear, a gentle guy whose large stature belies a surprising amount of vulnerability. Louis-Dreyfus, meanwhile, creates a heroine who can behave abominably (there's a scene late in the film where Eva behaves so badly towards Albert that it's excruciating to watch) and yet still maintain a core of goodness that gives her rooting value. She and Gandolfini have a nice, easy chemistry together which makes their characters' relationship alternately charming and heartbreaking, and which brings into even sharper relief the contrived relationships and characters which have come to define the romantic comedy genre. The romantic comedy may almost be dead and buried, but Enough Said shows why it should be resurrected.
Posted by Norma Desmond at 8:00 AM