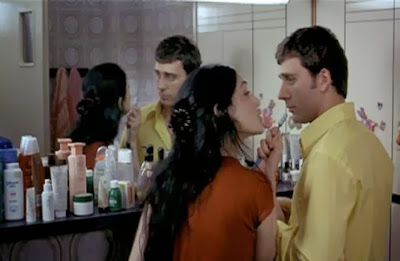 Sooner or later, everyone needs to grow up. That doesn’t mean, necessarily, that they have to conform to their parents’ expectations of them, but they need to grow up enough to stand up to those expectations. Late Marriage is about a man who grows up, but only in a superficial way. He does what he’s expected to do – what tradition demands – but at the cost of his happiness, which means that he will forever be a resentful human being, stuck in a form of perpetual adolescence where major life decisions are still being made for him by others. Dover Kosashvili’s Late Marriage is a sometimes funny, occasionally horrifying, and completely enduring film about the power of tradition, the intensity of expectation, and the limits of love.

The story centers of Zaza (Lior Ashkenazi) who is 31 but still regarded by his family as a child because he’s unmarried and still being financially supported by his parents as he completes his PhD in philosophy. As the film opens, he’s brought to the home of a prospective bride, the two families coming together and interacting in a very rigid and formal way, dissecting the qualities of the prospective bride and groom to determine if, on paper, they might be a match. The girl is only 17 but her age doesn’t really matter since Zaza has no intention of marrying her, or any of the other women his parents try to set him up with. The woman he really wants – and, secretly, has – is Judith (Ronit Elkabetz), who is divorced with a young daughter and, therefore, entirely inappropriate from the point of view of his Zaza’s family. Zaza’s father (Moni Moshonov) knows about the relationship, which has been going on for some time, and has grown impatient waiting for Zaza to fall in line. He pressures his son to end his relationship and, when that doesn’t work, organizes a posse of family members to terrorize Judith into breaking it off. What happens next says everything there is to say about Zaza’s character... or lack of it.

Late Marriage is a fascinating film, noteworthy in particular for its frankness. There’s an extended sex scene between Zaza and Judith which provides a potent example of the difference between film sex/nudity as exploitation and film sex/nudity as a means of expressing something about the characters. The scene, though graphic, is not gratuitous. Instead, Kosashvili uses it to indicate the level of emotional and mental intimacy between Zaza and Judith and the rawness of the scene gives way to the rawness of everything else about the film, from the painful family dynamics, to the short, passionate bursts of violence, to the quiet moments of both happiness and misery. Although the depth of emotion between Zaza and Judith is made real, this is anything but a love story, and those emotions don't transform into a means of conquering all obstacles, but instead become the weight that keeps the relationship from rising above betrayal. Because of that scene of stark intimacy, we understand why what Zaza does (and doesn't do) is something that can't be rectified.

When it comes to the depiction of Zaza, the film is absolutely merciless, allowing him to be defined by a contemptible level of weakness. This is a man who so dreads having to be responsible for his own choices that he would rather let someone else force him into a life he doesn't want than rouse himself from his inherent passivity. If he were to stand up to his parents and marry Judith, than any unhappiness he felt as a result of that decision would be his own fault. If, however, he allows his parents to control his options and force him into marriage to a woman of their choice, then whatever unhappiness he has in the future will always be the fault of his parents because they forced him to give up the woman he really wanted. Zaza wins by losing, by holding onto what is ultimately most precious to him: his status as victim. He would be an absolutely loathsome character were it not for Ashkenazi's layered and complex performance, which conveys the self-loathing at Zaza's core and almost makes him seem sympathetic. Almost. If only the film had any pity for him, we might be able to let him off the hook, too.
Posted by Norma Desmond at 8:00 AM