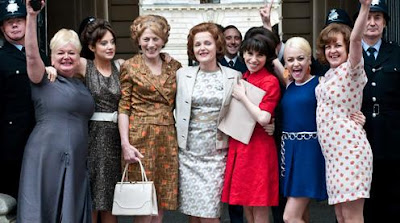 “Issue” movies are a staple of the cinematic landscape, but they can be difficult to pull off. There is, after all, a fine line between taking a subject seriously and presenting it in an overly earnest or reverent way. Nigel Cole’s Made In Dagenham finds the right tone, approaching the material sincerely but without drenching it in syrupy sentiment. The film pretty much came and went from theatres (at least on this side of the Atlantic), but it’s definitely worth a look and will hopefully find an audience now that it’s out on DVD.

The story centres on the 1968 strike by sewing machinists at the Ford factory in Dagenham. The conflict begins relatively simply and on a small scale: the women who work at the factory object to their work being downgraded to non-skilled labour and enter into a fight with management to be reclassified (and get the wage increase that such reclassification would entail). Their complaints are not taken seriously; even the head of the union is more concerned about how their demands might undercut those of the male workers than he is about improving the horrid working conditions of the women, whose demands are relatively small given that they’re basically working in a sweatshop. Frustrated at not being taken seriously, the women rally around their de facto leader, Rita O’Grady (Sally Hawkins), and the situation slowly blows up, becoming an all-out fight for pay equality and setting the stage for the passing of the Equal Pay Act 1970.

Though it eventually yields results, thanks in large part to the intervention of then-Secretary of State Barbara Castle (Miranda Richardson in a spirited performance), the strike is incredibly divisive and has short-term consequences that nearly sink the whole venture. The husbands of the striking women, including Rita’s husband Eddie (Daniel Mays), are initially supportive, albeit in a vaguely patronizing, head-patting way, but when the women being on strike actually starts to take a toll on their own job security (since many of the husbands work at the Ford plant as well and the women’s strike eventually brings all work at the plant to a halt), their attitudes change. The idea that women’s labour is as valuable as that of men also rankles them, a position which I find bizarre in that if you’re a man working at the plant married to a woman who also works at the plant and you’re making X amount and she’s making the lesser Y and her pay is raised to X, then isn’t that a benefit to you as well? I don’t want to go off on a whole tangent, though, so moving on...

The film takes great pains to be about more than just the fight for equality in pay, expanding its theme to become about equality generally. Rosamund Pike (an actress who by all rights should be a star but has been cultivating a career as a character actress) has a small role as the wife of a Ford executive, an intelligent and capable woman who is marginalized by her husband and treated like an empty vessel, but who becomes a member of Rita’s support system. Barbara Castle finds herself consistently condescended to by her male underlings (which eventually elicits a short speech which begins with the ominous sentence, “I am what is known as a fiery redhead.”), her political position dismissed by the head of Ford (Richard Schiff). Towards the end of the film Rita has an angry confrontation with Eddie, who puts forward the idea that since he doesn’t beat her or the kids and doesn’t cheat on her, she should be grateful. To paraphrase the great philosopher Christopher Rock, you don’t get credit for not doing something you shouldn’t do in the first place, which is pretty much exactly what Rita tells him, stating, “That’s how it should be!”

Written by Billy Ivory, Made In Dagenham is, in many ways, a film that is very conventional for its type. A lot of the standard tropes are used here to move the story along but the film uses them so well that it never feels like lazy storytelling and Cole and the actors bring enough energy to it that it doesn’t seem stale or banal. The cast is excellent, particularly Hawkins as the reluctant but very effective leader and brings facets to the character that ensure that she’s never simply a cardboard hero. The only real criticism that I have of the film is that the resolution seems to come about too easily (though bear in mind that I say that having no idea how it happened in real life), and the story concludes as it’s still in the process of building up momentum. All in all, Made In Dagenham is a very good film, it just seemed like it didn’t really know how to end.
Posted by Norma Desmond at 8:00 AM