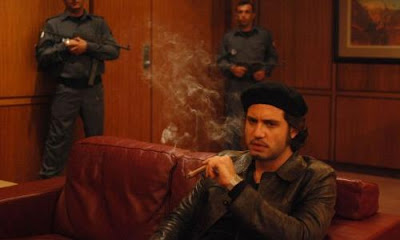 There is a terrific German film called The Legend of Rita (though in some markets it’s called The Silence After The Shot), which centers on a leftish activist/terrorist who lives long enough to see the ideological war she’s been fighting be rendered meaningless. Towards the end of the film she says something to the effect that the fortunate ones are those who abandon the cause before the cause can abandon them. I always think of that line whenever I watch movies about ideological warriors, though in the case of the eponymous character of Carlos, abandoning the cause would have been impossible since his greatest cause was himself and his own mythology.

Olivier Assayas’ film (the version I saw was the 3 hour version condensed from the 5 and a half hour TV miniseries) takes as its subject Ilich Ramirez Sanchez, aka Carlos the Jackal (played by Edgar Ramirez), a Venezuelan anti-Zionist militant who rose to prominence through various terrorist activities in the 1970s. The film follows him from his joining the PFLP in 1970 up to his arrest in 1994, touching on the major events in which he took part and charting his evolution from passionate volunteer to brooding leader. Though he comes equipped with a great deal of bravado, the film shows him as a perpetual bungler, a man who has not fully earned his reputation. His attempt to assassinate the VP of the British Zionist Federation is a failure, as is as a bombing of a London bank. His raid at the OPEC headquarters in 1975 results in one disaster after another. For one thing, he kills a Libyan delegate despite the fact that his escape plan involves making a stop-over in Tripoli before going on to Bagdad. He’s eventually forced to free all of his hostages in exchange for money – a deal which puts him at odds with everyone else on his team, results in them denouncing him, and leads to his expulsion from the PFLP.

Carlos then attempts to form his own organization, at which point he’s driven less by ideology (if he ever really was driven by ideology in the first place) and more by self-aggrandizement, and finds some degree of success until the Cold War reaches its conclusion. In a world re-ordered by the absence of the USSR, people like Carlos are not just of little use to governments but are a distinct liability to those governments that want to forge working relationships with the West. Carlos wanders for a while – losing one wife and gaining another in the process – and eventually settles in Sudan, where he is captured while recovering from an operation.

As depicted in this film, Carlos is a man who lives his life completely in service to his own ego. His “revolutionary” activities are less about causing change than they are about building himself up to a point where he can demand unquestioning fealty from those around him and know that people around the world are aware of who he is (towards the end, after an underling questions his relevance in a post-Cold War world, Carlos brags that the French would still pay a high price for him). As part of his effort to underscore Carlos’ vanity, Assayas pays particular attention to the man’s physical appearance and how it alters over the course of the decades. As the film opens Carlos is lean and fit, a preening specimen of masculinity who expands over time and becomes so self-conscious about his weight that he puts off surgery to remove painful varicose veins from his testicles so that he can have liposuction instead.

Ramirez undergoes such great physical changes from the beginning of the film to the end that it’s difficult to believe that the same actor plays him throughout. His performance is full of fire and bravado, a perfect complement to Assayas’ matter-of-fact directing style, allowing Carlos’ perception of himself to stand out in sharp relief against the perception of the rest of the world. At 3 hours this is obviously a fairly involved story but it’s never boring; on the contrary, it’s a fascinating portrait of megalomania set against the backdrop of global political upheaval. I’d love to see the full version, but seeing the condensed version will do for now.
Posted by Norma Desmond at 8:00 AM

If for no other reason than seeing him reach this momentous decision, I must now see this movie.

Ha! Several of the other characters in the movie (including his wife) are amused by that particular turn of events as well.