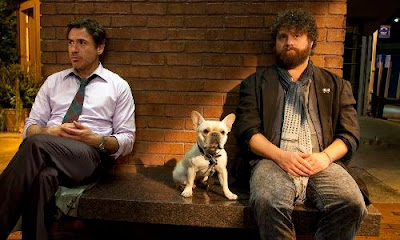 Downey is Peter Highman and Galifianakis is Ethan Tremblay, two travelers thrown together after being kicked off a plane. Both are headed to Los Angeles – Peter for the birth of his child, Ethan to make it as an actor – and while Peter would very much like to have nothing more to do with the man whose attempt at a casual discussion of bombs put them both on a no fly list, he’s lost his ID and money and Ethan is offering to let him join in on a road trip. Peter attempts to establish rules to make the trip less painful, but things frequently go awry, starting when Ethan decides to make a quick stop to spend just about all his cash on some marijuana that he insists is medicinal. Of course, if Peter knew that later Ethan would fall asleep at the wheel, trashing the rental car and breaking Peter’s arm in the process, he might not have gotten so upset about the detour.

Due Date unfolds like a test of endurance as Ethan continuously does things that push Peter towards the edge and Peter tries, desperately, not to go over. This doesn’t always work, as evidenced by the fact that during the course of the film Peter punches a small child, picks a fight with a war vet, and spits on Ethan’s dog (“I’m sorry I spat on your dog,” he says later then adds, “I have no recollection of that.”). Eventually, of course, Peter comes to appreciate and maybe even like Ethan, but then again there’s always the possibility that those feelings have their root in some kind of brain swelling resulting from the various injuries Peter endures through the course of the film.

Though much of the film rests on simple gags centering on injuries, bathroom humour, and a little bit of stoner humour too (this element is probably the most successful, due in part to a sequence in which Peter gets a contact high and then sits completely entranced while Ethan explains the wonders of Two and a Half Men to him – “That’s so sophisticated!” Peter enthuses), it does make an effort to root itself in more substantial themes. Fatherhood is a driving force of the story as Peter is determined to be a better father than the one who abandoned him as a child and Ethan has a difficult time letting go of his recently deceased father, whose ashes are along for the ride in a coffee can. The film doesn’t go very deep into this theme, but it does manage to use it to flesh out the characters just enough to give it a bit of resonance, allowing us to see Peter less as a jerk and more as a guy suffering from anxiety about not repeating the past, and Ethan as someone who needs a strong male figure to replace the one he just lost rather than as a man with an almost inconceivable capacity to irritate those around him.

As I said, Due Date works in large part because Downey and Galifianakis invest themselves so fully in their characters. They play off of each other really well, giving their scenes a sense of balance that helps keep the story from going off the rails into total insanity. Jamie Foxx and Michelle Monaghan have supporting roles as Peter’s friend and wife, respectively, but neither really gets much to do. Monaghan, in particular, is really wasted here, especially to those who have seen Kiss, Kiss, Bang, Bang in which she and Downey displayed some pretty good chemistry. Still, for what it is Due Date is an entertaining movie and worth a watch.
Posted by Norma Desmond at 8:00 AM

With the crew that was involved with this I was expecting some genuinly funny moments, and much to my surprise, I had none. I think that Downey Jr. really needs to put this one behind him and focus on actually winning that Oscar that he deserves. Good Review!

I was expecting more than I got from this movie, which seemed somewhat like a retread of "Planes, Trains and Automobiles" only without the pathos, but with fart jokes. That having been said, Downey and Galifinakis gave it all they had, and I've spent the same amount of money to be less entertained than this (like, on "The Hangover" for example) so all in all not a total waste. Your review really gets to the heart of this movie...excellent job!

@Dan O.: I'm sure it's only a matter of time before Downey gets that Oscar.

@motown missle: You've definitely got to be in the right mood to enjoy this one, otherwise it'll just seem dumb.