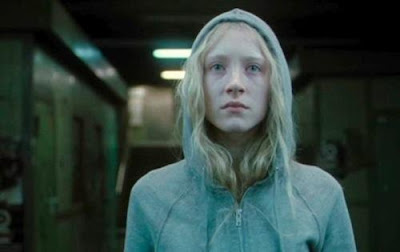 “I just missed your heart.” Oh, no, Hanna. You got it. This time last month who would have guessed that of the two movies about teenage girls kicking ass and leaving a trail of bodies in their wake, audiences would embrace the vaguely art house one with the (comparatively) quiet ad campaign rather than the CGI extravaganza with the huge marketing campaign? Of course it helps to be as thoroughly awesome as Hanna is.

For the first 16 years of her life, Hanna (Saorise Ronan) is raised in isolation, taught the skills for survival by her father, Erik Heller (Eric Bana). She is trained in combat, can speak multiple languages, is warned to always be on her guard, to always be strategizing her next move. She has an encyclopaedic knowledge of the world, but longs for a more practical form of knowledge (she knows what music “is,” for example, but is desperate to know what it sounds/feels like). Erik has his doubts but decides to make the choice hers: he digs up a box which contains a transmitter and informs her that as soon as she flips the switch, their solitary life will end and she will be thrust into the world. After thinking it over, Hanna decides to take the chance and once the transmitter begins sending out its signal, she's pushed into the orbit of CIA agent Marissa Wiegler (Cate Blanchett). Hanna and Erik go their separate ways and Hanna allows herself to be captured by the CIA, where she kills a few people and escapes with some crucial DNA information about herself.

After making her escape Hanna stumbles across a family of tourists, befriending the teenage daughter, Sophie (Jessica Barden), and stowing away in their van as they travel from Morocco to Spain. For a brief window of time, Hanna gets to experience what it’s like to be a teenage girl (“I’ve never had a friend,” she says with wonder to Sophie), though her lack of social skills make for some awkward moments (not that she realizes that these moments are in any way awkward). It isn’t long, however, before Isaacs (Tom Hollander), an operative working for Marissa, catches up with them and though Hanna escapes, Marissa is able to discover where she’s going. While Hanna begins to uncover details about why the CIA is so interested in her, Marissa and Erik race to get to her first, leading to the film’s truly great climax.

Hanna, admittedly, has a few problems in terms of logic – for example, why would Erik have and hang on to the transmitter in the first place and what did he imagine would happen once he and Hanna reunited in Berlin? I mean, even if they got rid of Marissa, was the CIA just going to forget about them despite having expended a considerable amount of money and more than a few lives trying to capture them? – but director Joe Wright and screenwriters David Farr and Seth Lochhead proceed with such confidence that you’re content to be propelled forward with the story. I think it also helps that the film makes an effort to be about more than moving its protagonist from one action piece to another and grounds the story in the idea of emerging into adulthood from adolescence. Hanna presents a super intensified version of the typical growing pains – the (perhaps naive) insistence on being ready for the big, wide world; the discovery that knowledge is not always equal to experience; the necessity of rejecting, on some level, the values of your parents in order to create an independent identity (Marissa may not be Hanna’s mother, but she is her “creator”) – but it develops the theme enough to make it seem like the film is doing more than just taking a cursory swipe at depth.

Wright is a director best known for stately pictures like Atonement and Pride and Prejudice, but his handling of action sequences is deft and surefooted. The action set pieces, of which there are several, are filmed in a kinetic style that falls somewhere between music video and video game, but it never devolves into looking cartoony and the variety that the film finds in terms of staging these scenes is great (the abandoned amusement park set is easily my favourite from the entire film). This is a really well put-together film that is entertaining without pandering to the lowest common denominator and that assumes that the audience cares about the context of the action rather than just the combat and bloodshed.

Ronan, in an intense and surprisingly vulnerable performance, carries Hanna with ease, allowing sparks of humanity to be mixed into the more sociopathic elements of the character’s personality. She’s a character we can root for even though she’s not really “good;” in a fundamental way there really isn’t that much difference between Hanna and Marissa beyond the fact that one is positioned as “hero” and the other as “antagonist.” As the villain, Blanchett delivers a performance of steely perfection (though the accent seemed a bit suspect at times), making Marissa the ruthless personification of Hanna’s Id. Both actresses bring more to their characters than films like this typically require, which is a big part of the reason why Hanna ends up being such an enjoyable experience. If you’re still on the fence about this one, by all means go and see it; it’s worth the price of admission in every way.
Posted by Norma Desmond at 8:00 AM

From the trailers and descriptions of the movie that Focus has been releasing, I got the idea that they really wanted this to be Bourne with a teenage girl in the main role. What they got was an dark-comedy action film that is also a coming-of-age story. Focus might not have wanted the movie they got out of Hanna, but I think it's terrifically entertaining.