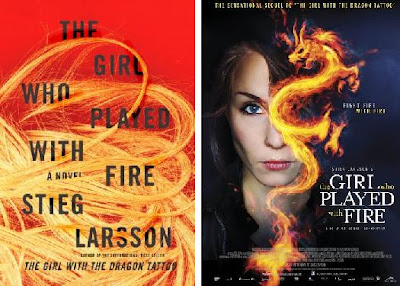 Plot: The follow-up to The Girl with the Dragon Tattoo picks up more or less where that story left off: Lisbeth Salander has absconded into a new identity with the money she embezzled in the first instalment. Mikael Blomkvist, meanwhile, is still in Sweden and using his magazine Millennium to take on the corrupt forces of the world. When Lisbeth returns to Sweden and is implicated in three murders, Blomkvist works to prove her innocence while she eludes capture by the police and tries to track down Zalachenko, the man behind the murders and, as it happens, her father.

Primary Differences Between Book and Film: Stieg Larsson’s books are very long, so obviously all the films have to do some work at compressing the stories. In this case that amounts to cutting a couple of subplots – Blomkvist’s affair with Harriet Vanger, Erika Berger’s flirtation with leaving the magazine – and moving the story forward at a faster pace.

For the Book: Because the book has the luxury of taking longer to unfold, it also has the ability to really plumb the depths of its themes. The film sort of loses its grip on Larsson’s driving theme – institutionalized misogyny – and in the process becomes an action movie, which is a shame both because of what’s lost in the process and because The Girl with the Dragon Tattoo managed not only to retain, but build, on that theme.

For the Film: The film trims a lot of the fat from the novel and part of that process involves discarding some of the lesser elements of the story. For example, the films move away from Larsson’s depiction of Blomkvist as completely irresistible to all women everywhere, which is a welcome change. The film also drops the cosmetic procedures Lisbeth has performed between the books, procedures that always struck me as totally out of character.

Winner: Book. While it has its flaws, it is ultimately a more thorough and character-driven story than the film, which sort of devolves into a series of action set-pieces. The film has some good moments (and Noomi Rapace is of course excellent as Lisbeth), but it doesn’t really hold together quite as well.
Posted by Norma Desmond at 8:00 AM

I saw all three movies in the theater with a girl who read the books. We both loved the first movie, but she enjoyed the 2nd and 3rd more than I did.

I think the 2nd film was generally better than the 3rd. Still, I had the distinct feeling that the last 2 installments were much more enjoyable for my friend because she was mentally grafting-in all the things from the books that the movies left out.

You make a great point in saying that the movies sort of turned into an action franchise. This is very much true. I would've thought that the books were very action-oriented based on the movies...

Also, I'd heard about those cosmetic changes, and I didn't think they made much sense either...

I actually liked the 3rd film more than the 2nd, but that may be because my expectations going into the 3rd were lower due to the fact that the 3rd book is my least favourite.

There is a lot of action in the books, particularly the 2nd one, but there's so much else going on that the action doesn't totally dominate the story as it tends to in the film.