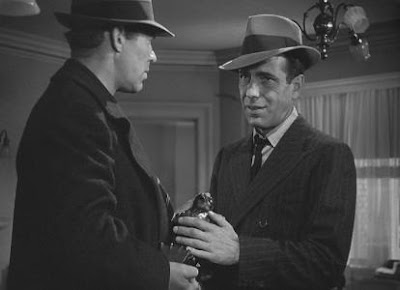 Year: 1941
Director: John Huston
Great Because...: It’s the stuff that dreams are made of. A great ending to one of the best detective movies ever made, one which is perfectly attuned to that dark humour that runs through film noir. It ties everything up nicely and gives star Humphrey Bogart some premium lines with which to send off femme fatale Mary Astor.

The Maltese Falcon is the thing that everyone wants and that people have been known to kill for. Those in pursuit include Joel Cairo, Brigid O’Shaughnessy, Kasper Gutman and his henchman Wilmer, and the detective Sam Spade who, during the course of the film, is hired by Cairo, seduced by Brigid, and kidnapped and drugged by Gutman. A lot of deals are made, some double crosses go down, and in the end all the players gather together for the unveiling of the object in question.

One of the many great things about The Maltese Falcon is the way that it sets up interest in its title object, building an incredible amount of suspense leading up to its appearance on screen, and then reveals that it’s a fake. Cairo and Gutman are devastated, at first, and then quickly turn around to continue the chase (the chase is, after all, what this story is all about), while Spade calls the police to tip them off. Once that’s taken care of, Spade lays things out for Brigid, getting her to admit to having killed his partner, Miles, and revealing that he isn’t going to help her get away with it despite how he may feel about her. “I hope they don’t hang you, precious, by that sweet neck. Yes, angel, I’m gonna send you over. The chances are you’ll get off with life. That means if you’re a good girl you’ll be out in 20 years. I’ll be waiting for you. If they hang you, I’ll always remember you.” It’s one of the great movie kiss offs, not just for the crispness of the line, but because you can tell that Spade really means it.

The Maltese Falcon is a film that accomplishes what few films can, in that it manages to be both a very hard story while also having an incredible degree of lightness to it, and yet it never starts to feel tonally disjointed. The ending perfectly highlights this mixture, contrasting the jaunty exit of Gutman and Cairo with the tearful and dejected exit of Brigid. It also underscores that quintessential essence that Bogart brought to most of his films, that element of his persona that, while not always completely on the up and up, was also defined by a hard and fast sense of morality. The ending to The Maltese Falcon is perfect both in terms of tone and characterization, and a great example of why Sam Spade is one of the very best fictional detectives ever created.
Posted by Norma Desmond at 8:00 AM

Maltese Falcon sure remains a cornerstone for not just film noirs, but cinema in general - one of the great masterpieces of American cinema. And Bogart, as the world-weary and cynical gumshoe, was absolutely brilliant.

Yeah, the finale of the film, with that acerbic sendoff, sure made the film that much more unforgettable. Great to read that deliciously cynical Sam Spade line eulogised in your piece.

On a different note, though I have a collection of Hammett's novels, including Maltese Falcon, lying with me at home, for some reason or other I haven't gotten around to reading it. I guess I'll do so soon. By the way, I've read quite a few of Raymond Chandler's novels, and am of a big fan of his writing.

I'd be interested to know, if you had to choose one, which one of these 2 authors would you prefer?

Norma, a very nicely written analysis of the way the movie sets the viewer up for that finale and the reasons it works so well. I've been thinking about this movie a lot recently as I compiled lists of the greatest classic screen performances. I put both Bogart and Astor on for this movie. Bogart created many memorable screen characters, but his Sam Spade is my favorite. I think you pinpointed the one thing above all else that makes this film such a satisfying viewing experience--its mingling of hardness and lightness without ever feeling, as you succinctly put it, "tonally disjointed" (lovely phrase).

@Shubhajit: I've actually never read either Hammett or Chandler. However, having seen and enjoyed a number of films adapted from Chandler's work, I'd probably prefer him.

@R.D. Finch: It's kind of odd because, on the one hand The Maltese Falcon is the archetypal noir story but, at the same time, there really isn't any other noir film (that I can think of at least) that finds this same mixture of light and dark.

I think Bogart could read the phone book and make it good enough to earn him an Oscar nomination. But you're right -- as last scenes go, this one's a pip.