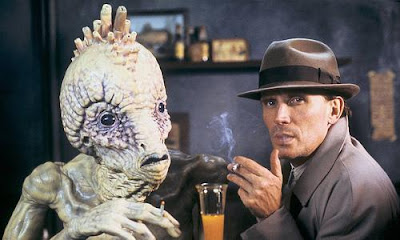 Okay, let’s try this again. David Cronenberg's Naked Lunch is definitely easier to digest the second time around, though it is still an intensely bizarre film, even when you're prepared for what's coming. Naked Lunch is a very ambitious film and in many respects a technical marvel, though I'm not certain that it totally holds together. Still, it's an interesting film and definitely one that any Cronenberg fan should see.

First and foremost, Naked Lunch has a couple of different levels to it. It is an adaptation of stories by William S. Burroughs (his novel Naked Lunch but also his other fiction), but it also mixes in biographical elements of Burroughs life, transplanting them to his fictional counterpart William Lee (Peter Weller), and it is also about the act of writing the novel “Naked Lunch.” It begins with Lee as an exterminator whose wife, Joan (Judy Davis), has been pinching his product for recreational use. Later Lee is arrested on suspicion of dealing his product as a drug, though this arrest turns out to be a pretence to get him into a meeting with a giant bug who is his controller in his capacity as a secret agent (he wasn’t aware that he’s an agent but, as he’s informed later, agents who don’t know they’re agents tend to be particularly effective) and tells him he has to kill Joan. Lee is convinced that he’s hallucinating and instead kills the bug and escapes from police custody. Later, however, he completes his “mission” by killing Joan in a game of William Tell.

After Joan’s death, Lee flees to Interzone where he is to write reports about Interzone Incorporated with the help of typewriters which are living creatures and try to guide him through the murky social/political situations which surround him. During his time in Interzone Lee comes into contact with Tom Frost (Ian Holm) and his wife, Joan (Davis, once again), two writers who are notorious for enjoying the locale’s most popular attraction (young men). Eventually he’s told to seduce Joan in order to find Dr. Benway (Roy Scheider), who is the head of a drug trafficking operation. But just how much of this is supposed to be real?

Naked Lunch pulls back every so often, revealing that the Interzone sections are figments of Lee’s drug addled brain, spurred by bad trips. He’s been writing his experiences down (his “reports”) and his friends Hank (Nicholas Campbell) and Martin (Michael Zelniker) have been reading it and struggling to get Lee just a little more lucid so that he can finish his manuscript and publish it (though one wonders how he’d be able to finish a work like this while lucid). The various bugs in the story (including the Mugwumps) appear to be metaphors for the things that Lee/Burroughs finds most distasteful about himself: his drug use, his sexual urges, and his writing. The drugs take a physical and mental toll on him; his sexuality, in particular his same-sex attractions, seem to repulse him; and he views his writing as a direct response to having killed his wife. In the story, Joan Lee’s death is what gets him started writing his “reports;” in real life, the death of Burrough’s partner Joan Vollmer (under the same circumstances that Joan dies in the story) is often credited as being at the root of his writing career. In one scene in the film all three of Lee’s demons converge, as he seduces Joan Frost while doing the drug “black meat” (made from centipedes) and writing on one of the bug/typewriters.

Naked Lunch is a challenging film that often throws the audience directly into the deep end. Stylistically it is an interesting film, but because it works so hard to distance itself from the audience, it’s difficult to actually connect with it and because of that I’m not sure that it truly works. It is an aggressively unpleasant film that puts so much emphasis on the more repulsive visual aspects of its story that the actual meaning behind those images is obscured and overwhelmed. Cronenberg is a masterful director (and certainly no stranger to the weird or the challenging) and though I know that many people would disagree with me on this, since Naked Lunch has a fairly sizeable cult following, I would consider this one of his less successful efforts.
Posted by Norma Desmond at 8:00 AM