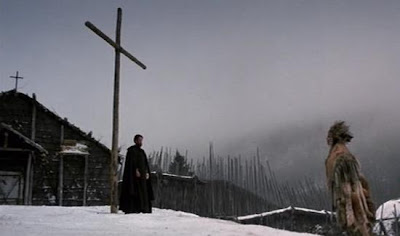 The landscape in Bruce Bereford’s Black Robe always looks foreboding. It’s bleak and uninviting, as if the land itself is rejecting the French missionaries and their intention to bring Catholicism and “civilization” to what will eventually become Quebec. It’s a harsh and unblinking film and one that seems to hold the audience at arm’s length, but its images and themes resonate thanks to its finely rendered story and characterizations.

The story is set in 1634 and centres on Father LaForgue (Lothaire Bluteau), a missionary at a Quebec settlement given the task of travelling to a distant mission in a Huron village. He leaves with Daniel (Aden Young), a fellow settler, and a few members of the local Algonquin tribe, including Chomina (August Schellenberg), his wife (Tantoo Cardinal), and their daughter Annuka (Sandrine Holt), with whom Daniel has fallen in love. Before long, however, the Algonquins abandon the two Frenchmen but, feeling guilty, Chomina insists on returning, at which point they’re ambushed and those who aren’t killed are taken captive by Iroquois.

Chomina, LaForgue, Daniel and Annuka are tortured by the Iroquois, who intend to kill them slowly. They escape captivity after Annuka seduces their guard, but Chomina is wounded in the process and the other three are forced to leave him to die. Before they set off, however, Chomina informs Annuka of the visions he has had, in which he sees LaForgue enter the Huron settlement alone. When they get near the village, Annuka insists on parting ways with LaForgue and a reluctant Daniel is convinced to go with Annuka, leaving LaForgue to enter the (seemingly) abandoned outpost on his own.

I think that one of the reasons why Black Robe works as well as it does is that it portrays the missionaries in a way that is sympathetic without being romanticized. Obviously one person trying to impose their beliefs on another who already has their own set of beliefs is always going to be a losing proposition, often ending in violence. However, the missionaries aren’t depicted as being malicious in their intentions to supplant aboriginal culture but as people who genuinely and intensely believe that they’re doing the right thing. They must, otherwise they wouldn’t endure the many horrors they face in terms of both the landscape for which they are ill-prepared and in terms of conflict with the local peoples (the priest whom Father LaForgue replaces at the settlement has lost half his face as a result of displeasing the Hurons). That being said, the film doesn’t “excuse” them per say and in the final moments the film confirms what the Hurons had expressed as their fear: that once they adopted the ways of the settlers, the Iroquois would see them as weak and wipe them out.

Bluteau anchors the film with a performance that underplays to good effect. LaForgue is a character driven by faith who tries to hold himself at a distance from things in order to avoid the temptations that surround him. After seeing Daniel and Annuka together, for example, he engages in a little self-flagellation and any other expressions of physical intimacy that happen in his vicinity seem to cut him to the core. He’s a very closed character in many ways, just as the film itself gives a sense of being closed, and while that keeps us from engaging with him on a deeper level, our inability to really know him gives the character a haunting quality. This spectral quality of his is further underlined by the fact that the Algonquins call him "Black Robe," a nickname which has the effect of putting him at an even greater distance, pushing him into the realm of the mystical.

Black Robe is photographed by Peter James, who previously worked with Beresford on Driving Miss Daisy, and it’s the starkness of the images that he captures that really stands out. The other elements of the film are strong, but it’s the cinematography that really sets the tone and underscores everything in this beautiful film that falls just short of being a masterpiece.
Posted by Norma Desmond at 8:00 AM

This is a really fascinating movie. It handles some of its subject poorly, but some it is handled really well. definitely worth watching.