Great Last Scenes: All About Eve 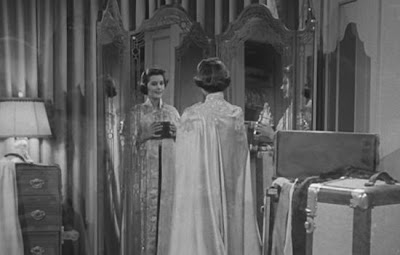 Year: 1950
Director: Joseph L. Mankiewicz
Great Because...: Comeupance is oh so sweet. Sure, Eve succeeds in becoming a bona fide star, lauded and awarded and hated by those she climbed over to get there, but she's about to get a taste of her own medicine in the form of her own "biggest fan." Any ending other than this one would ring patently false.

Eve Harrington has scratched and clawed her way from nothing to stardom by latching herself on to Margo Channing and systematically usurping her in all areas. Starting out as Margo's assistant, she finagles her way into being her understudy and as luck, or something more nefarious, would have it, gets to take the stage when Margo uncharictaristicly misses a show. Eve is a hit and, as everyone quietly agrees, more suited for the ingenue roles than Margo.

Not content to just take Margo's place professionally, Eve also makes an attempt to steal Margo's boyfriend, Bill, although in this she is less than successful. Her manipulations have caused her to make many enemies, but that doesn't matter to her. All that really matters is that she's a star and once a star, always a star... right?

Following her big win at the awards ceremony, Eve has a close encounter with Phoebe who claims, much like Eve once claimed to Margo, to be a fan. Flattered by Phoebe's attention, Eve decides to take her on as an assistant, having apparently never heard the adage that those who forget history are doomed to repeat it. As Phoebe tries on Eve's clothes, picks up Eve's award, and gazes at herself in the mirror, we can guess where this is headed.

Labels: All About Eve, Last Scenes

What a great film. I love the performances across the board in this one.

All the performances are definitely great. It's a perfectly cast film.

I love love love this film! It is so truly evil! It's one of my favorites of all time!