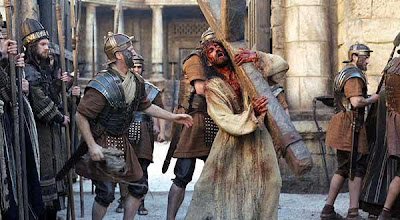 Note: This post was originally part of the "Counting Down The Zeroes" series over at Film For The Soul
* * *
Director: Mel Gibson
Starring: James Caviezel, Maia Morgenstern, Monica Bellucci

The Passion of the Christ is a difficult movie to approach, seeing as it comes with so much baggage. Hailed in some circles as a masterpiece, reviled in others as being anti-Semitic and excessively violent, it is a film that can never be fully divorced from the controversy that it engendered. If it is anti-Semitic, does that necessarily make it a bad film? Should art be judged on its message or the skill of its construction? On the flip side, just because it’s a film about Jesus Christ and purports to be faithful to the Scriptures, does that in and of itself make it a good film? The Passion of the Christ is almost impossible to consider solely on its own merits.

The film chronicles the last 12 hours in the life of Christ (James Caviezel), including his arrest, trial, torture and finally crucifixion. At certain points the film flashes back, showing key moments in the life of Christ that parallel or otherwise inform his current state. There isn’t a lot to the film plotwise, much of the running time is devoted to scenes of Christ’s torture and death. It is a brutal, blood-soaked film, but that is of course its intention. Writer/director Mel Gibson has said on many occasions that one of his objectives was emphasize Christ’s suffering and it is, indeed, inescapable here. However, it isn’t the blood that makes these scenes so disturbing, but the sadism of the Roman soldiers and the indifference on the part of the crowd. His wounds neither satisfy them nor give them pause.

Christ’s travails are witnessed by those who want him punished as well as those who want him saved, including Mary (Maia Morgenstern), Mary Magdalene (Monica Bellucci), and John (Christo Jivkov). Of the supporting performances Morgenstern’s is the most moving. I would even venture to say that hers is the best performance of the film period, trumping even Caviezel. As Christ suffers, so does Mary, who watches her son condemned to death, mops up his blood and at last watches him die. In one scene she watches him fall to the ground in pain and recalls a moment when he fell as a child and she was able to make it better simply by holding him in her arms. There can be no more of that; his problems are beyond the scope of maternal comfort and assistance and her pain comes not simply from his suffering but from her complete helplessness in the face of it. The mother-child connection really grounds the film and gives it a human element that is absolutely crucial.

So, the big question: is the film anti-Semitic? I’m inclined to say no. I think that if you walk away from this with anti-Semitic feelings, you went into it predisposed to that particular brand of lunacy and I doubt that any person of even moderate intelligence could be inspired to hate anyone based on this film. It is true that the Jewish priests led by Caiaphas (Mattia Sbragia) are shown in a negative light, but so are the Roman soldiers. I would argue that the Roman soldiers are portrayed worse, since they seem to revel in inflicting pain for the sake of inflicting pain, whereas the priests have motives that go beyond simply wanting Christ to suffer. Their actions are characterized in political terms as Christ’s teachings threaten the status quo and their power. In the same way, the actions of Pontius Pilate (Hristo Shopov) are informed by politics and his shaky relationship with the Roman Emperor Tiberius. Unlike the Jewish priests, however, Pilate is allowed to have more than one dimension and he is allowed to express his conflicting feelings about the situation. It’s a failing of the film that the villains (Jewish priests and Roman soldiers alike) are portrayed in such a thin way, but I wouldn’t go so far as to call it hateful.

As a director Gibson strives for realism – that’s the justification for the graphic nature of the film – but makes stylistic choices that undermine that sense of realism. I’m surprised that there’s any slow motion in movies anymore, seeing as this one tried so hard to use it all up. I’m of the belief that, like most things, slow motion is most effective when used sparingly. Mel Gibson obviously disagrees. The effect becomes less meaningful each time it’s used and it gets used so much that by the end you’re completely desensitized to it when it should be making its greatest impact. The film undercuts itself through this repetition and puts a greater burden on the actors to forge an emotional connection between the audience and the action on screen.

In the final analysis, The Passion of the Christ is a decent film but its craftsmanship is ultimately not equal to its notoriety. Because it focuses so wholly on the negative – the agony of Christ’s death – and pays only cursory attention to his ideas and teachings, the film fails to be as thought provoking as films like The Last Temptation of Christ or The Gospel According to Matthew. As it stands, the conversation very nearly begins and ends on the controversy rather than the content of the film. As the controversy fades, so does the film’s significance as a work of art.

When I'd first watched this film, I must admit I quite liked it. But that was then. Now what I'm left with is a deeply ambiguous feeling about the movie. As some people like to state, its not bad, but as you've pointed out, it isn't that good either.

And well, in my opinion - the movie is neither anti-Semitic, not realistic. As for the first argument, as you've succinctly observed, its too bogus an argument to go into. And where the latter is concerned, no disrespect intended, but I really don't think even a quarter of that kind of torture actually took place despite what the scriptures might say. After all we all know, every moment of pain inflicted on Christ must have been amplified manifold by his followers' words of mouth. I think agreeing to any religious scriptures blindly, irrespective of what religion it belongs to, is a really bad idea - only those blinded by faith do that.

At the end, I must say I generally agree with mostly all your views regarding this deeply polarizing and controversial movie - the movie's shock content indeed outweighed its artistic worth. But still, we must give credit to Mel Gibson for at least sticking to what he believed in, and not bowing before the desire to mould the movie such that it pleases everyone.

I think this might be the first review of TPOTC that I've ever read that focuses only on the film as a film...and refers to the politics of it strictly in passing.

@Shubhajit: It's definitely a labour of love and whatever your feelings on the film, you have to give Gibson credit for putting his money where his mouth is.

@Mad Hatter: I think it probably helped to see the movie for the first time so long after the fact.