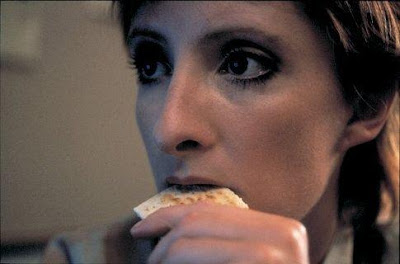 I’ve Heard The Mermaids Singing is a gracefully directed film about the frustrated ambitions of an artist. Made in 1987, the film is not ageing particularly well, though at its core there is still something about it that resonates. Alternately whimsical and heartbreaking, with a generous dose of fantasy, it’s a nicely balanced film about the agony of making art.

The film centres on Polly (Sheila McCarthy), a temporary secretary who spends her free time taking photographs. She has an active imagination, which is likely her saving grace. Her fantasies are exciting and make her feel alive – feelings that she tries to translate into her photos. Her life outside of her fantasy world is dull and unfulfilling; she’s a second rate temp constantly being berated for her lack of organization. Her feelings about her job begin to take a turn, however, when she begins working at an art gallery run by Gabrielle (Paule Baillargeon), whom Polly refers to reverentially as “the Curator.”

Polly sees Gabrielle through a lens of hero worship that begins to manifest itself as a crush, feelings that are exacerbated by the sudden arrival of Gabrielle’s ex (and future) lover, Mary (Ann-Marie MacDonald). Polly discovers that Gabrielle has a series of paintings in her apartment that she’s never shown to anyone. Hoping perhaps to secure a more permanent place in Gabrielle’s life by giving her the confidence to be an artist, Polly takes one of the paintings and shows it to a critic, who thinks it’s marvellous and spreads the word about Gabrielle’s unique and amazing talent. Watching as Gabrielle is celebrated by the art world, Polly gets an idea to send her photos to the gallery anonymously. Gabrielle looks at them briefly and declares that they show no promise. Polly is crushed, but not as crushed as she’ll be when she discovers a secret about Gabrielle’s paintings.

The story is related to us after the fact in the form of a video confession by Polly. The flashback scenes are intercut with Polly’s fantasies, which keeps the overall tone of the film relatively light. The story is serious but at the same time the film doesn’t take itself too seriously. There is a distinct mocking of “art speak” in the way that Gabrielle and the critic discuss various pieces, and the film offers a gently defiant view of the role of artistic criticism. When Mary sees one of Polly’s photos and Polly repeats Gabrielle’s view that it’s no good, Mary asks why she has to look at it in terms of “good” or “bad” when what she should be asking herself is whether or not she likes it. Whether Polly’s photos are good or bad isn’t really the point; the point is that taking them makes her happy and that they express something about her. Just because someone else doesn’t like them, doesn’t mean they weren’t worth taking in the first place.

As Polly, McCarthy renders an effective and engaging performance. She allows Polly to be without pretence and to wear her heart on her sleeve, and the contrast between her and the more reserved Gabrielle makes her vulnerability seem all the more intense and striking. The way she just seems to deflate when Gabrielle renders her verdict on her photos is really heartbreaking because McCarthy makes it clear that Polly wouldn’t mind if other people didn’t like it, but she wants validation from Gabrielle so badly.

The intensity of relationships between women is a consistent theme in writer/director Patricia Rozema’s work, as is the theme of artistry. White Room is about a singer who provides the voice but has another woman act as the persona (whether literally or figuratively is open to some interpretation); When Night Is Falling is about a relationship between two women, one of whom is a performance artist; Mansfield Park is less an adaptation of Jane Austen’s novel than a film about Austen herself, and the relationship between Fanny and Mary Crawford is given an ambiguous treatment. The aesthetic Rozema works with in Mermaids and the issues that she explores flow through her body of work, though her films differ radically from each other. This film, her feature length debut, shows an artist very much in tune with her voice and the end product is a film that is very strong.