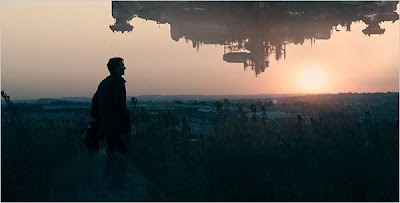 Whether you like District 9 or think it's overrated, you have to give credit where credit is due. This little movie, with its little budget, and only one recognizable name to its credit (okay, that name is Peter Jackson, but still) came out of nowhere and became the movie to see as the summer sputters to a close. It's an impressive feat and District 9 is worthy of the honour. It isn't without its problems, but it is nevertheless a very good film.

The film takes place in Johannesburg where, 20 years ago, an alien craft came to a sudden stop over the city and has been hovering there ever since. After months of waiting for contact, a team is sent up to get into the craft, where they discover a large group of malnourished aliens. The creatures – referred to derogatorily as “prawns” – are brought to earth, afforded refugee status, and housed in a special area known as District 9. Over the course of two decades, the district becomes a slum, rife with crime of all sorts, and the government decides that it must take action by relocating the district’s nearly 2 million residents to another area.

The project is overseen by a government agency called MNU and the field work is headed by Wikus van de Merwe (Sharlto Copley), who is kind of a doofus and has perhaps been set-up to fail (or die) by his father-in-law, who also works for MNU. Backed up by the army, Wikus and his crew go into the slum, inform residents that they’re being evicted, shoot some of them, and laughingly set fire to a nest of their eggs before Wikus accidentally ingests a mysterious fluid from a canister. This fluid is desperately sought by an alien named Christopher Johnson who, with the help of his young son, has been collecting it in the hope of being able to get back up to the mothership. The accident causes a mutation in Wikus that makes him very valuable to the government as it allows him to use the aliens' weapons. The problem is that Wikus’ greatest value comes from his availability to be dissected and experimented on and so he escapes and flees back into District 9, where he and Christopher form a reluctant and tenuous partnership in the hope that Wikus can reverse the mutation and Christopher can get to the mothership and then home.

The film begins as an allegory about apartheid, directly evoking the events in Cape Town’s District 6 during the 1970s. Though the film does an excellent job of establishing human-alien relations along the lines of race relations, calling to mind attitudes that are in some cases a thing of the past (albeit the near past) and in others still shockingly common, the story is ultimately a shallow allegory and not a particularly apt one. For the metaphor to work, shouldn’t the aliens be representative of white South Africans instead of black South Africans? Apartheid didn't have its roots in black refugees wandering into the borders of what would become South Africa, but in white Europeans coming in to carve up a piece of territory for themselves and colonize the native peoples. By aligning the humans with white South Africans and the aliens with black South Africans, isn't the film implicitly endorsing a mythology of white right of place? Further, when you factor in the way that the film depicts its human characters, it becomes even more problematic.

Now, granted, the most “human” character in the whole movie turns out to be Christopher, but look at the way that the actual human characters, both black and white, are portrayed. You have two peripheral characters that are “good” in an unqualified way, one black (Wikus’ friend and co-worker), one white (Wikus’ wife). You have Wikus who, although he turns out to be a strong finisher, starts the film an ignorant racist (speciesest?) and even in the middle shows that he’s only a reliable partner when he needs Christopher as much as Christopher needs him. You have two groups of bonafide bad guys, one a group of Nigerian gangsters, the other members of the MNU who are predominantly white, particularly at the top. The Nigerians live in shacks in District 9, do business with the aliens (in the form of everything from arms dealing to prostitution), and eat parts of the aliens that have been blessed by a witch doctor. They are depicted, for lack of a better term, as “savage” while the MNU agents – who are just as savage in any objective sense – are presented as a modern, organized and sanctioned force. They harvest aliens, too, but it’s for a “science” and therefore has the spectre of legitimacy denied to the Nigerians’ ceremonial feasting. My point is, while all the humans (save for a few exceptions) are bad, by portraying the black villains as being less “advanced” than their white counterparts, the film is actually endorsing some of the attitudes its allegory wants to repudiate. What I see in District 9 is a film very much at odds with its own racial/social politics.

But… maybe none of that even matters when you get down to brass tacks. Even if the film is ideologically problematic, is it well made? Indisputably. Even at the end, when it gets a little generically actiony, it is still solidly constructed and well-paced, and the lead is played marvellously by Copley. Wikus isn’t a “white hat” good guy and the film allows him to be shown in some less than flattering light, giving Copley room to move within the character so that he becomes more than just “the guy stuff happens to so that things can blow up.” It is a multi-facetted and intelligent performance and I look forward to seeing more from Copley in the future, possibly in the form of a District 9 sequel, which is of course in the works. Writer/director Neill Blomkamp is also one to watch, a filmmaker who can make room for action in the story without doing so at the expense of the narrative. His work in District 9 is worthy of praise and the film itself is worth its recent acclaim.