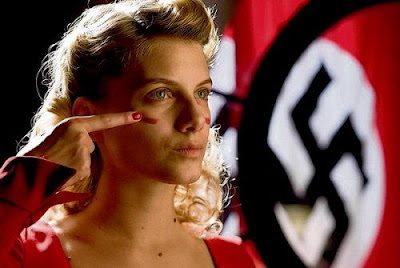 Tarantino’s latest is a glorious mess of a movie that plays entirely by its own rules. It isn’t a film of any great depth, but as glossy summer entertainment goes, I don’t know that you can do much better than this one. It’s a violent, darkly comic, beautiful looking film that occasionally goes off the rails but ultimately makes for a great time at the movies.

The film begins like a western, immediately evoking early scenes from Sergio Leone’s Once Upon A Time In The West (it begins, in fact, with the words “Once upon a time... in Nazi occupied France”). In the distance a dairy farmer sees the SS coming down the long dirt road. He sends one of his daughters to get water so that he can wash up. They wait anxiously as the Germans take their time and eventually the farmer finds himself sitting at his table with Col. Hans Landa (Christoph Waltz in a disarmingly and sinisterly joyful performance), who coaxes him into revealing the whereabouts of the Drefyus family, whom he has been hiding. The family is slaughtered save for Shosanna (Mélanie Laurent), whom Landa allows to escape and who lives for years by hiding in plain sight in Paris.

Elsewhere a group of Jewish soldiers, mostly American, have been assembled under the command of Lt. Aldo Raine (Brad Pitt) for the purpose of killing Nazis. Dropped into occupied France in 1941, the group quickly gains a reputation for brutality and the Nazi high command becomes increasingly desperate to catch them. By 1944 the group is in league with British film critic turned soldier Archie Hicox (Michael Fassbender) and German film star/spy Bridget von Hammersmark (Diane Kruger) in a plot to take out some of the major Nazis at a Paris film premiere. The premiere, as it happens, will take place at a theatre which Shosanna has inherited and she has a plan of her own to kill some Nazis.

The film boasts a wealth of characters with the typical Tarantino flair. One of the things I love about Tarantino’s films in general is that you never walk away from one thinking about that one really memorable character because there are always about a dozen really memorable characters and the casting is always perfect. I went into the film with a bit of trepidation regarding Pitt because the trailers made it look like he was really hamming it up. As it turns out he is hamming it up, but it works well with the overall, over the top feel of the film and I really can’t imagine the character being played any other way or by any other actor. However, as good as Pitt is and as extraordinary as Waltz – whose performance has been garnering the most attention – is, the real standout for me was Laurent, whose Shosanna is the heart of the story. Her performance, which is very understated and grounded, is on the other end of the spectrum from Pitt’s, giving the film a nice feeling of balance.

The film has been accused by some of trivializing World War II in general and the Holocaust specifically because there is nary a mention of The Final Solution. I don’t really think this accusation is fair because, as anyone who has seen the movie can tell you, the war as we know it isn’t really the war being dealt with in this film. Inglorious Basterds exists outside of history and in an alternate reality. Besides which, any direct dealing with the Holocaust wouldn’t fit with the film’s overall tone, which is darkly comedic. One of my favourite shots occurs during a scene when Hitler (Martin Wuttke) rails at his officers to find the Basterds. In the background there's painter creating a giant Hitler painting who keeps turning to study him and capture some nuance of his person. As with all Tarantino’s films, the beauty is in the smaller details.

If there is an underlying socio-political meaning to the film, I would argue that it doesn’t have to do with the darkness of the human soul but rather with the power of film itself. Film was an invaluable medium for Hitler and the Nazis, particularly the propaganda films directed by Leni Riefenstahl, who gets a few mentions here. The plot conceived by Shosanna involves locking the top Nazi brass in the theatre and then setting her stock of nitrate film prints on fire. Film, which helped give birth to the Nazi movement, is now tasked with being an agent of its destruction and thus Inglorious Basterds might be read as working to reclaim the medium from some of its worst abusers.

By and large, the film really worked for me, although there are two things that didn’t. First is the film’s use of David Bowie’s song “Cat People,” which I found jarring and really took me out of the movie, although this anachronism perhaps eases the way for the grand inaccuracy of the film’s finale. The second thing has to do with the film within the film. Much of Basterds is subtitled because the German characters speak German and the French characters speak French rather than falling back on the old movie standard of having characters speak accented English. Yet, in spite of this, the German propaganda film within the film is in English. That really bugged me. That being said, however, these are very small quibbles with a film that is overall incredibly entertaining.

How delightful to hear others are having the same reception from this amazing film as I did. I think as long as people accept it for what it is instead of what it wasn't they can truly appreciate the achievment this movie actually was.

Here was my review if you are interested. Loved yours!

Most of ther eviews i read on this film are quite biased sounding, but you did a good job. I caught this film yesterday and I too give it a around 3 1/2 stars. Great article!

I loved it too, and thanks for choosing one of my favorite images from the movie in your post.

"Cat People" was an interesting inclusion - especially since it's so radically different from everything else in the score. Thinking back on it though, I like the surrealness of setting the scene to a song that wasn't around yet.

even more so, when one considers the appropriateness of the chorus:

"I'm putting out fires / With gasoline"

@Heather: I agree. Inglorious Basterds isn't trying to be a movie like, say, Saving Private Ryan and it shouldn't be judged as if it is. I was fortunate enough to see it in a theatre that seemed to be full of Tarantino fans, many of whom clapped at the end, so the screening was definitely a fun experience.

@Mad Hatter: I love the image, too, though I tried (and failed) to find a shot of my absolute favourite from the film: Shosanna's laughing face on the burning screen. Fantastic!

I've actually been going back and forth in my mind over "Cat People." I think if I see the film again I'll be able to appreciate the song for its intent, but as a first-time viewer I found it a little distracting.

I agree that Inglourious Basterds "is a glorious mess of a movie that plays entirely by its own rules." It's not quite original from me to say that this film is memorable because of its weird - but amazingly crafted - characters. What I liked about this film is Tarantino's ability to get the most out of dialogues and even from vulgar lines (Hugo Stiglitz:"At this distance, I'm a Frederick Zoller.")

As for the performance, it's top notch although this film is not a serious film like Flags of Our Fathers or L'ennemi intime just to name a few.