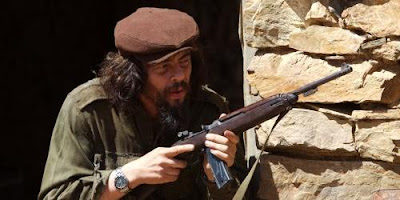 After seeing The Argentine and being… not disappointed, exactly, but certainly underwhelmed, I wasn’t sure what to expect from Guerilla, the second part of the Che Guevara saga. Objectively I can see how Guerilla’s flaws are probably about equal to those of The Argentine, but subjectively I enjoyed the former much more than the latter. Guerilla perhaps benefits from the fact that the fall is infinitely more fascinating than the rise, but I also think that it’s the stronger half of the story and able to stand on its own.

Guerilla picks up several years after The Argentine leaves off. In the interim Che (Benicio Del Torro) has divorced his first wife, married Aleida (Catalina Sandino Moreno) and had three children with her, participated in guerrilla activities in the Congo, and disappeared from Cuba, leaving behind a letter of farewell to Fidel Castro. Officially, his whereabouts are unknown, though in reality he has disguised himself in order to sneak into Bolivia where he intends to duplicate his success in Cuba. With a small force behind him he once again heads into the mountains, training peasants, strategizing, and attempting to elude capture by the Bolivian army, which is being backed by the U.S. Although there are several setbacks, Che remains defiantly true to his belief that he will be able to overthrow the current regime and install a government that will tend to the welfare of the poorest citizens.

There are problems, however, and at the root of them are those very citizens. They distrust Che and his men, many of whom are Cuban, and don’t consider his fight to be theirs. They don’t wish to take up arms and join his ranks and they are reluctant to help him, although sometimes powerless to stop him. One of the reasons I feel that this film is stronger than its predecessor is that The Argentine tends to whitewash Che, while this film presents him in a darker light. In one scene he and his men come to a farm in order to get food, taking away some livestock but giving the farmers money. The farmers would rather keep their livestock because they and their children are hungry and there’s no market nearby which basically renders the money useless. The revolutionaries insist on taking what they’ve come for and being unarmed and outnumbered, the farmers have no choice. Bullied on one side by the army and on the other by the revolutionaries, who feel no need to try to “win” the people over and instead waltz in with a heavy sense of entitlement, it’s easy to understand why the peasants would rather stay out of it than rally to the side of the revolution. When you factor in that Bolivia had already had a revolution and that the peasants were still poor, overworked, and unable to get medical treatment, it’s easy to understand why they think the fight is pointless.

Still, Che persists, determined to see revolution in Bolivia so that he can move on to the next country and then the next until all of Latin America is free. The film watches as he slowly unravels, as illness leaves him almost incapacitated, as his forces are separated, as the numbers dwindle due to death and abandonment of the cause, as the people who will ostensibly benefit from the revolution refuse it. In one particularly brutal scene he takes his frustrations out on a horse. By the end, death seems almost merciful.

Once again, Del Torro’s performance is what wins the day. The Che of The Argentine was a man who slowly gained confidence in himself as a leader; the Che of Guerilla is a man who has perhaps bought too much stock in his own hype and can only grit his teeth as the market takes a tumble. He enters the Bolivian stage as if simply being Che is enough to ensure victory and realizes too late that having proved himself to the people of Cuba means nothing to the people of Bolivia, whose help and support are just as necessary to victory as the cash and armaments he gets from Castro and other allies.

Stylistically, Guerilla differs only slightly from The Argentine. Gone are the black-and-white interview/U.N. segments and instead there is just a single, linear storyline marking the hundreds of days that Che spends in Bolivia. The photography is slightly darker, reflecting the less favourable outcome of this adventure, and the pacing is somewhat slower, although perhaps it simply seems that way because the main narrative isn’t broken up as it is in The Argentine. Guerilla also has some distracting casting (Lou Diamond Phillips, Franke Potente, and most bizarrely Matt Damon), but by and large I feel that it carries its flaws much more easily than The Argentine.