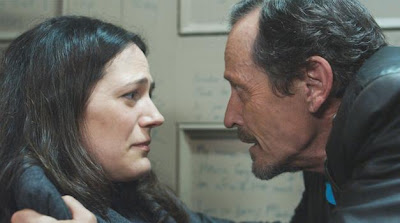 Pontypool takes a page out of the Jaws handbook, providing a vague, mostly unseen danger to our heroes that looms all the larger for its near total absence from the screen. If you’ve seen Jaws, you know how awesomely effective that method of storytelling is. What we see might be scary but it will never be as scary as what we can’t see and so it is with Pontypool which finds a radio show host and his two producers being bombarded with stories of strange and violent behaviour on the other side of town and knowing that this undefined threat is moving closer and closer to them.

The film takes place over the course of a few hours on a snowy, dreary day in Pontypool, Ontario. Radio show host Grant Mazzy (Stephen McHattie) has a strange encounter on the road, which leaves him shaken up and which he decides to discuss with his listeners. The discussion is cut short, however, when word starts to come in about a demonstration of some kind outside the office of a Dr. Mendez (Hrant Alianak). While Grant editorializes regarding the scant amount of information they have about the unfolding event, his producers Sydney (Lisa Houle) and Laurel Ann (Georgina Reilly) try to find some kind of official corroboration for the eye witness accounts. Though there is no official confirmation from the police about what is happening, people continue to call in to discuss the increasingly violent and disturbing events outside of Dr. Mendez’s office.

As the day progresses, the death toll mounts, and words like "cannibals" start getting tossed around, Grant starts to lose it, believing that this is all part of some big hoax being perpetrated on him. It isn't until the appearance of Dr. Mendez himself at the radio station (which is actually just a church basement), that the reality of the situation starts to sink in. There is a virus of sorts going around, he explains, one that isn't passed through the blood but through the English language itself. This presents something of a dilema for the radio team, who wonder how they can explain the situation and warn people if the language is infected and are also forced to question their own culpability in spreading the virus through their medium.

Save for a few moments, the film takes place entirely in the church basement and much of it takes place in the sound booth itself after Dr. Mendez reveals that the afflicted hunt with their ears not their eyes. Safely (for the time being) locked up in the soundproof booth, Grant and his crew have to figure out what they're going to do to save themselves and how they might cure those who have the virus, but haven't reached the fatal stage yet (those who have the virus and don't find a victim to pass it on to kind of... explode). This minimalist approach makes the film all the more effective because the tension rises as the safe space becomes smaller and smaller. The fact that we don't actually start to see the effects of the virus until about 2/3rds of the way into the film is also quite effective and credit for that goes to the actors, who so successfully convey and transfer their growing sense of terror to the audience. There isn't a lot of gore in this movie (a little but not much) but it's about a hundred times scarrier than most movies that dispense with buckets of blood from openning to end credits. The terror is psychological and that can be pretty hard to shake off.

It's difficult not to read a political meaning into this film when its protagonist is a radio show host who prides himself on "telling it like it is," language is the enemy, and one of the characters is a soldier recently returned from Afghanistan. One of the symptoms of the virus is repeating a word ad nauseum which, if you've ever watched certain news shows, you know that simply repeating "talking points" in an increasingly loud voice is what passes for political analysis these days. Pontypool isn't aggressively political but this criticism of the way that language is being abused is definitely there.

Bruce McDonald, who directed last year's "love it or hate it" The Tracey Fragments, keeps the film really lean stylistically speaking. The simplicity of his style here adds immensely to the growing feeling of claustrophobia that the screenplay and the actors work so hard at creating. Pontypool is apparently the first film in a planned trilogy from McDonald - I'm not really sure how that will work given how this one ends, but I'll definitely be looking out for the next installment.

This sure is a film that can rely on its cast's performance since the "horror" (the term itself might be a misnomer for the mainstream public) is all in the character's head during most of the time. I'm not a fan of horror films, but it's rare that we see a film that can bring to the surface the characters' fear without the visual eloquence (or harassment) of mainstream films. Besides, I can't wait for the next Genie Awards since I enjoyed watching the cast's performance in this film.

Finally, speaking about political analysis in this film, I wouldn't be surprised if some saw in this film a remark against unilingualism (the contrary of bilingualism) in the Canadian context.

I hadn't thought about it in terms of unilingualism, but you make a good point. After all, it's only english that's infected.

"I hadn't thought about it in terms of unilingualism, but you make a good point. After all, it's only English that's infected."

At the same time, we must not think that unilingualism only concern English Canada. After all, when you think about it, in the 21rst century, there are still many Quebeckers who complain that there's no French soundtrack on English-language films and TV series that come out on DVD or Blu-ray discs.

Great film! Pontypool is currently film of the month on Projector.tv. You can watch it there for only 99p: http://bit.ly/9S3aFg