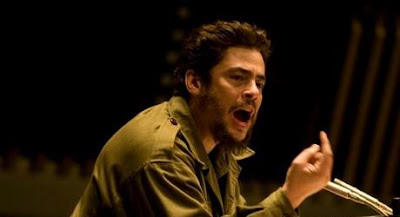 My original intention was to review both parts of Steven Soderbergh's epic in one review but since that would have made for a post that was way too long, and since I feel that there are enough differences in style and quality between the two to consider them as seperate films, I'll be reviewing The Argentine today and Guerilla tomorrow.

The Argentine opens in Mexico in 1955 when Che (Benicio Del Torro) meets Fidel Castro (Demien Bichir) and gets involved in his plans for revolution in Cuba. Suffering from debilitating bouts of asthma, Che ventures into the mountains to join the revolutionaries already gathered there and take a commanding role. His status as a foreigner makes the others distrust him and some refuse to take orders from him. Not quite comfortable yet with his role in the revolution, Che refuses to push the issue and quietly accepts this insubordination, which earns him a reprimand from Castro when he finally joins them. Slowly, as their forces grow thanks to various peasant volunteers, Che becomes more at ease in his role as a leader and a more commanding presence.

Intercut with the progress of the revolution is faux-documentary footage detailing an interview between Che and American journalist Lisa Howard (Julia Ormond), and his 1964 address before the United Nations General Assembly. These scenes, shot in black-and-white as a contrast to the lush photography of the guerrilla narrative, explore Che the celebrity, invited to parties, revered by some and reviled by others. His speech at the United Nations is passionate and accusatory, making it clear that as far as he’s concerned his work is not done yet and won’t be until revolution spreads all the way through Latin America. Still wearing his green uniform, he could not be more of a contrast with the other U.N. representatives, and it is apparent that he sees his place as being out in the field and Guerilla will see him return to that life.

If you go into this film hoping to gain a clear understanding of Che the man, you’ll probably come out disappointed. Soderbergh keeps us at a distance from him both literally and figuratively, often filming him in long shots and focusing almost exclusively on Che as a soldier, strategist and political figure. His personal life figures into the story only in a brief mention of a wife back in Mexico and in the suggestion of a relationship developing between him and fellow soldier Aleida (Catalina Sandino Moreno). I think this is a smart way to go about telling story because so often biographical films get so focused on the sex lives of their subjects that they lose sight of what really makes those subjects interesting in the first place. With Che, it’s his politics and his role as a revolutionary and the way that his public image has taken on a life of its own. Since Che is so heavily steeped in symbolism in popular culture, it makes sense to me to maintain that distance in the film.

As Che, Del Torro is able to hit several different notes to render a full and rich performance. As a soldier he’s measured and calm, as a doctor he’s gentle and caring, and as a politician he’s ferocious as he expounds on the injustices of the world. Though the film keeps him at arm’s length, Del Torro is nevertheless able to connect with the audience in a very real way, conveying Che’s early insecurities and his difficulties in terms of his health. He doesn’t necessarily make Che a sympathetic character, but he’s able to go beyond the iconic image to make him human.

The Argentine is a solid effort, though it doesn’t completely succeed. There is an unfinished feeling to it and as it reaches the end, it feels less like a conclusion than a deep intake of breath as it prepares to start telling you the story of Guerilla. Unlike Guerilla, it doesn’t really stand up as a film on its own, which may be due to the fact that the Che biopic was originally conceived as being only the story told in Guerilla with everything that takes place in The Argentine being added after Terrence Malick dropped out and was replaced by Soderbergh. Since one half had considerably more time to develop than the other, it makes sense that that half should also be just a little bit stronger.