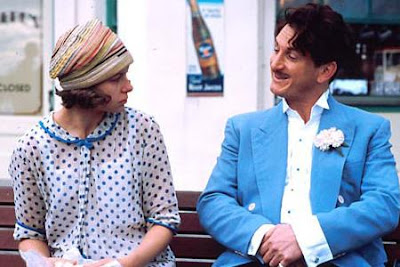 I’ve been a Woody Allen fan for a while and I’ve seen some of his best films and some of his more dreadful pieces, but somehow I’d missed out on Sweet and Lowdown until recently. My loss because while I was giving movies like Anything Else a chance, I missed out on this delightful film and the extraordinary performances contained within courtesy of Sean Penn and Samantha Morton. This isn’t just good Woody Allen, this is Woody Allen at the very top of his game.

The film is constructed by incorporating documentary conventions into its story, ostensibly the true (well, truish) story of Emmet Ray (Sean Penn), who was once the second best guitar player in the world. Woody Allen appears alongside other experts and historians in interview segments disbursed throughout the film in an attempt to get at the man behind the legend, telling anecdotes of varying believability, including one story involving a hold-up at a gas station that is told three different ways. The only thing that isn’t really in dispute is that Ray was a genius and underappreciated in his own time.

A few facts, just to get them out of the way: Ray idolized Django Reinhardt – the best jazz guitarist in the world – and couldn’t be near him without fainting; if he showed up for a gig at all, he usually showed up drunk; he was briefly married to a dilettante novelist named Blanche (Uma Thurman, who makes her entrance into the film as if she’s auditioning for a Marlene Dietrich biopic); and he had an obsession with watching trains and shooting rats down at the dump. All of this, while supplying amusing moments in the story, are secondary to Ray’s relationship with a mute laundress named Hattie (Samantha Morton). Although he treats her badly, repaying her unconditional affection with meanness, infidelity and mocking of her muteness, not to mention simply disappearing on her one night, she is ultimately the glue that holds him together.

The relationship between Ray and Hattie is inspired by the relationship in Fellini’s La Strada, though it leans more to the comedic than the tragic, at least up until the very end. Despite the great difference in tone between the two films, Ray’s final moments on screen – which find him sad and broken with the too-late realization of what he had and lost – are as moving as the final moments of Fellini’s Zampano. Although Ray is indisputably selfish and occasionally even cruel, Penn provides him with enough humanity that you can still feel for him even while knowing that he’s gotten exactly what he deserves. Penn is also able to blend Ray’s brilliance in one respect (as a musician) with his buffoonery in nearly every other respect without making the character seem inconsistent. Ray is a man who knows that he’s great at this one thing but never really feels secure about it because he’s not certain that everyone else knows he’s great, too. He is, in his way, more vulnerable than Hattie, which is perhaps what draws her to him and then keeps her there long after most women would have left. As with Penn, Morton is terrific in the role, suggesting the inspiration of Fellini’s story without allowing Hattie to become simply an imitation of Gelsomina. Her performance is a thing of absolute beauty and the impression she leaves is remarkable given that she never utters a single word.

Allen’s mix of fact (Django Reinhardt) and fiction (Ray) and his joining of “talking head” segments with traditional narrative segments works really well in this film. Allen’s obvious enthusiasm for the subject matter, being a well-known jazz fan and musician himself, also helps immeasurably. Though he is inarguably a great writer and director, it is also difficult to argue that every once in a while he puts out a film that seems to simply go through the motions and in the last 15 years, or so, those less than great films have outnumbered those worth remembering. Sweet and Lowdown is one of Allen’s great films, totally deserving of being ranked alongside such films as Annie Hall, Manhattan, and Hannah and Her Sisters.

Great writeup of a great film, the conclusion to Woody's loose trilogy of cynical masterpieces at the end of the 90s, following Celebrity and Deconstructing Harry. This film is especially notable for the phenomenal performance of Samantha Morton, who doesn't say a word and yet conveys such depth, such charm, that her Hattie is just irresistable. Woody apparently told her to play the part like Harpo Marx and showed her some Marx Brothers movies as preparation; it seems to have worked wonders. Penn, of course, is also great, making Ray a kind of likable asshole.

I especially love the way the film comments on the unreliability of historical "fact" in that gas station robbery sequence: the narrative completely breaks down, stuttering and repeating itself, and each version of the story is equally unbelievable. The film says a lot about the form of the biopic and the historical documentary, suggesting that there's really no way of getting close to the deeper truth of another person's life, let alone a person who lived so long ago.

Norma, I saw this a few years ago not expecting a lot and was pleasantly surprised. I wouldn't rank it as one of Allen's absolute greatest, but I still found it very good. It was especially the appealing performances that made the movie for me. I'm not a big fan of Penn, but I thought he was subdued and convincing as the likable heel who is also an artist insecure about his talent. Thurman reminded me of a 30s screwball socialite version of Annie Hall, funny but a bit shallow. But as you and Ed point out it was really Samantha Morton who made the movie. She is just a wonderful, completely natural and winning actress, and I've loved her in everything I've seen her in. It's funny that she reminded you of Giulietta Masina in "La Strada" (and that whole comparison with Fellini's film was most apposite and one that hadn't occurred to me), while Ed thought of Harpo Marx. The person I though of while watching her was Lillian Gish in her D.W. Griffith roles. There was something about her winsome smile and the expert way she used her facial expressions that immediately made me think of Gish. A great post on a neglected movie.

@ Ed: I loved the robbery sequence for precisely that reason. It was my favourite part of the movie that didn't involve Samantha Morton.

@ RD: I hadn't thought about it before but now that you mention it, I can totally see Lillian Gish in the performance. It says a lot about the performance that it calls to mind so many different (and great) performers.