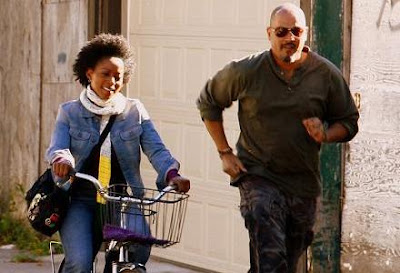 I’m tempted to review Nurse.Fighter.Boy. on an act-by-act basis because while the first act is great, setting up interesting characters in interesting situations; the second act is a little underdeveloped and the third act is so rushed it barely exists. The film ends right when the story gets the most interesting. It’s only 90 minutes – why not give it an extra half hour and make the most of what you've got?

As you may have surmised, the film is about a nurse, a fighter, and a boy. The nurse is Jude (Karen LeBlanc), a single mother trying desperately to keep her fight with cancer from disrupting the life of her son, Ciel (Daniel J. Gordon). This is of course impossible and Ciel spends all his waking hours worrying about his mother’s health and trying to make things better for her. The relationship between these two characters, who have no one but each other, rings very true and LeBlanc and Gordon relate to each other with ease. Both characters suffer the strain of having to play two roles – Jude as both mother and father; Ciel as child and nurse – but together they keep each other, and the life that they have created together, afloat.

The fighter in question is Silence (Clark Johnson), who inches into their lives and soon (too soon, perhaps) becomes a full participant in it. Once a boxer, Silence is now reduced to back alley street fights to make ends meet. It’s a lousy way to live and he knows it and wants more. He meets Jude in the hospital where she works and then again later, when she’s riding her bicycle outside his building. They’re attracted to each other, but she’s not sure about getting involved, reluctant to introduce a new complication into Ciel’s life. Soon, however, her illness makes her romantic life the least of her worries.

That Jude and Silence would be drawn to each other is believable enough – they’re both characters who have been beaten down a little by life but keep getting up and remain hopeful that there will be good things in the future – but the film rushes their relationship into overdrive. They spend one night together and then she’s hospitalized and decides that, rather than send Ciel to be cared for by her friend and doctor Eva (Elizabeth Saunders), she’ll allow Silence – a man she barely knows and whom she met for the first time in the emergency room being treated for a wound he’d rather not explain – to look after him. It just doesn’t make a lot of sense and the film would have done well to spend more time developing the relationship between Jude and Silence so that, as viewers, we might have something to hang on to.

LeBlanc, Johnson and Gordon all render nice, understated performances that go a long way towards making up for what the screenplay is lacking, but the gaps can't be totally filled by their efforts. These are characters that we could easily care about, but it feels at times like the film doesn't really care about telling us their story. It's a shame because it starts so strong and then by about the half-way point it seems to lose the thread and forget what it set out to do. As I said before, an extra half hour to really explore the situations it sets up would have helped this film immeasurably.