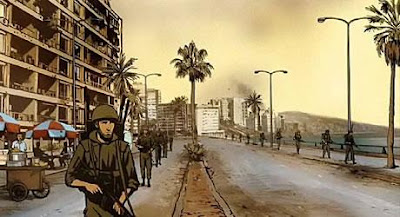 Waltz With Bashir is a film that succeeds at doing so many different things that you almost don’t know what to do with it. It’s a documentary about the Sabra and Shatila massacre, but also a narrative about the unreliability of memory that uses fantasy sequences. Events unfold almost entirely in animated form and yet its images seem more real than if the events had been recreated in live-action. It’s a provocative, challenging and ultimately breathtaking film.

The film opens with a nightmare being recounted to Bashir’s director, Ari Folman by his friend, Boaz (Miki Leon). The nightmare is connected to Boaz’s experiences in the Lebanon War, a war in which Folman also participated, though he can’t quite remember it. His inability to recall the details of life-altering events, particularly the genocide of civilians in Lebanon, disturbs him and the film traces his attempts to piece his memory back together.

He visits old friends who tell him about their own experiences in the war, experiences that may not have happened exactly as they remember, that may be exaggerated, that may have been reshaped according to later experiences. The impression one gets from these stories is that these men, many still teenagers at the time of the war, were ill-equipped for the reality of their undertaking. Going into Lebanon is treated as an adventure and scenes are often underscored by rock music to convey the attitude of frivolity with which the soldiers embarked on their mission. Time and again they describe themselves as simply shooting in all directions, not necessarily at anything, but because soldiers are supposed to shoot. More often than not, they don’t know what to do or what they’re supposed to be doing, and when they come under fire they panic.

In contrast to the young soldiers is the reporter Ron Ben-Yishai, who is described in almost superhuman terms, striding through the battlefield dodging bullets as if they’re nothing. Ben-Yishai would be the first reporter to examine the aftermath of the genocide and describes not only what he saw, but also conversations he had with military officials as word of what was happening started to spread. Again we come away with the impression that members of the IDF simply did not know how to react when the Labanese Forces started to avenge the murder of Bashir Gemayal on innocent people.

Of all the conversations Folman has throughout the film, the most interesting to me are his discussions with a psychologist who describes the ways that memory can play tricks on us and has an interesting theory as to why Folman can’t recall the massacre. His theory is that Folman, whose parents are Auschwitz survivors, can’t recall Sabra and Shatila because to do so would put him in the position of Nazi. I don’t know that that’s necessarily an apt comparison and I don’t think that Folman thinks so either given that the film’s focus on the disorganization of the IDF forces works in part to absolve them. The Labanese Forces are depicted as being ruthlessly organized while the IDF is plagued by uncertainty in the face of their ally’s brutality, which effectively shifts the blame (or, at least, the lion’s share of it) away from them. Whether that’s historically accurate or a trick of memory to help former IDF members cope with the legacy of the event, I don’t know.

The film’s animation, created by the Bridgit Folman Film Gang, is beautifully rendered and, as I said at the beginning, gives the story a sense of realism that perhaps couldn’t be captured by live-action. At the same time, the animation makes it easier to incorporate the dream-like quality of many of the memories related through the course of the film. It’s a very effective way to tell this particular story, which depends on the idea that while a memory might be very real to the person relating it, it isn’t necessarily 100% true to the way that things happened.

I have this at home right now from Netflix and am really looking forward to watching it.

I hope you enjoy it as much as I did.