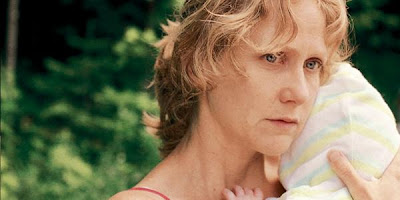 Lost Song begins with a young family driving into the wilderness, listening to classical music. Movies that start this way so rarely end happily. Although in their youth and supposed happiness they look perfect, they are of course not and the film traces their slow unravelling. Rodrigue Jean’s film is not, however, about a family drawn asunder as much as it is about the wilderness of motherhood and the isolation of postpartum depression. It is at times intriguing, at times terrifying, and (unfortunately) often rather frustrating.

The couple in question are Elizabeth (Suzie LeBlanc) and Pierre (Patrick Goyette), who have decided to move with their newborn son (so new that he hasn’t even been named yet) to a cabin in the woods, a place where Pierre spent time as a child and where his mother, Louise (Ginette Morin) lives in the cabin next door. For Pierre, who leaves every morning to go to work and returns in the evening, the quiet, rustic area is ideal but it is less so for Elizabeth. Cut off from the outside world, she quickly becomes lonely and those feelings are exacerbated by her sense of inadequacy as a mother. The baby won’t breastfeed, he won’t stop crying, and in a moment of carelessness she lets him fall during a changing. Louise helps out but that only makes things worse for Elizabeth, who begins to feel that she can never live up to her mother-in-law’s skill as a parent.

Elizabeth hears noises in the cabin’s attic. For a moment it seems that the film will go the gothic, madwoman in the attic route, but it's in fact woodland creatures that are up there and when she goes to investigate, she finds one of them dead. She wraps the animal in a baby blanket and takes it deep into the woods to bury it and, having thought about this film considerably since seeing it, I have a theory about this: though we literally see her burying an animal with the baby by her side, she’s actually burying the baby and everything that happens in the film after this takes place in her mind as she rewrites things in order to justify what she’s done. The reason that I think this is because the film seems to break at this point, becoming much darker, particularly in the portrayal of Pierre who, though always characterized as a control freak, becomes sexually abusive and controlling to the point of not even wanting Elizabeth to be alone with the baby.

Increasingly at odds with her husband, Elizabeth becomes determined to escape from him with the baby – which she does, towards an end that seems inevitable. Much of this film depends of LeBlanc, who conveys Elizabeth’s desperation and loneliness with a kind of quiet solidity. She doesn’t scream and gnash her way through the movie, but gently shifts through emotions, holding herself back almost as if she feels she has no right to be present in her own body. It’s a very effective and affecting performance that never for a moment seems anything but utterly natural. There is not an ounce of falseness or pretence or vanity in the way that LeBlanc plays this and she draws you so completely into Elizabeth’s mind that you can’t imagine not wanting Elizabeth, somehow, to succeed.

The problem with the film is that it is ultimately somewhat shapeless and far, far too slow moving. The measured pace is effective during the set-up but by the end it just feels ponderous and I found myself becoming very impatient with it. However, in spite of this, I do ultimately think that this is a film worth seeing. It may not be an entirely successful, but it is certainly interesting and LeBlanc’s performance deserves to be seen.