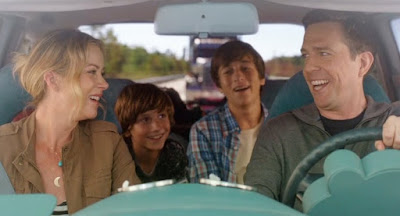 The good news is that Vacation, which sees the epic saga of the Griswold family's attempts to have some quality time together pass on to the next generation, didn't cost very much to make. In an era where movie budgets have ballooned so much that $100 million appears to have become a baseline rather than an anomaly, Vacation's $31 million production budget is admirable. The bad news is that Vacation secured neither the critical nor financial success necessary to revitalize a franchise that had its heyday in the 1980s (adjusted for inflation the original Vacation, European Vacation, and Christmas Vacation made $168 million, $120 million, and $152 million, respectively). More bad news: after watching it, you will have "Holiday Road" stuck in your head for at least the next three days. You've been warned.

Vacation shifts the focus from Clark Griswold (Chevy Chase) to son Rusty (Ed Helms), now freed of the eternal adolescence of the previous films and well into adulthood. He's now an airline pilot married to Debbie (Christina Applegate) with two sons, James (Skyler Gisondo) and Kevin (Steele Stebbins). But, while he's quite content with the life that he and Debbie have carved out for themselves, he realizes that Debbie has become increasingly unhappy and bored over the years and comes to feel that he needs to do something to shake things up in order to save his marriage. To that end, he cancels plans for the family to take their annual vacation to a cabin in Michigan and instead rents a van with the intention of driving cross-country to Walley World in order to recreate the family vacation he fondly remembers from his childhood. Although Debbie, James, and Kevin are not as enthusiastic as Rusty had hoped they would be, they set off on their holiday and learn that the old adage that it's the journey, not the destination that matters is only true insofar as the journey sucks so much that it makes you truly appreciate the destination when you get there.

Written and directed by Jonathan Goldstein and John Francis Daley, Vacation is a film that embraces its status as a reboot, going meta in its opening act to winkingly acknowledge that it's going back to the well of what was successful in the past but insisting that "the new vacation will stand on its own." I'm not sure that that's entirely true, but I'm also not sure if that's because the film is overly reliant on mimicking the original film or if it's because the original film set such a gold standard for the road trip genre, influencing so many subsequent films (and television episodes) that its plot points have become tropes, making it impossible not to mimic the original in certain ways. At any rate, Vacation doesn't do much to break away from the original, except that time and shifts in what is socially acceptable means that one of the kids can constantly be swearing and the sex-based humor can be cruder and more explicit. When it came out last year some critics accused Vacation of being a "mean-spirited" take on the original, which doesn't make a ton of sense to me since the original film killed a dog and an old lady during the course of its adventures. Vacation is a little mean spirited, but all of the films in the series have at least a little bit of that simply by virtue of what they're doing.

At their core, the movies in the Vacation series are all about celebrating the sanctity of the traditional middle class American family. The Griswolds are the "real America" or the "backbone of America" (or whatever they're going to call it during this election cycle) and the story is about them being under siege so the family unit can be reaffirmed through trial and tribulation and whatever is not part of that family unit can be marked as what's bad and wrong with the world. The crisis in this film isn't the vacation itself, but Rusty and Debbie's marriage. The plot kicks off with Rusty and Debbie having dinner with friends, during which Rusty learns that Debbie is bored of the same-old-same-old that their marriage has slipped into, and Debbie's friend notices that Debbie's wedding ring keeps slipping off her finger. Later, Rusty notices that Debbie has lost the ring and accuses her of getting rid of it to try to seduce Stone (Chris Hemsworth), Rusty's brother-in-law, and later still they learn that the semi-truck driver who has been following them, whom they had assumed is trying to kill them, is actually just trying to return Debbie's ring, which fell off at a diner at the beginning of the trip. The movie is about Rusty and Debbie's marriage, but even more specifically it's about Debbie's wavering commitment to the marriage (symbolized by her ring) and her learning to embrace what she has. The film is continuously chipping away at Debbie's dissatisfaction to expose it as the real problem and to bolster the idea that what Rusty wants - a wholesome family life where he's given up opportunities for higher paying and more exciting work so that he has more time to spend at home and where he and Debbie have sex once a week by the light of a yankee candle - is the right thing to want.

First it addresses Debbie's past by revealing that in college she was known as "Debbie Do Anything" because of her drunken antics and promiscuity. The film is first to repudiate Debbie's past by having her humiliate herself in an attempt to prove that she can still party like she did in college, which ends with her laying a puddle of her own vomit. Then it has Debbie repudiate her past herself by expressing embarrassment over her sexual history. Then the film has Rusty try to address Debbie's boredom with their sex life by trying to spice things up, first by suggesting that they have sex in a motel shower and then suggesting that they have sex on the Four Corners monument. The shower plan is thwarted when they discover that it's full of mushrooms, mold, and blood splatter, the Four Corners plan is thwarted when they get there and realize that they've accidentally wandered into an orgy involving other people who had the same idea and then almost get arrested. The message is that these attempts to go beyond the parameters of what they usually do is disgusting (dear god, that bathtub...) and dangerous and they would be better off sticking to the status quo. Then, to drive everything home, Debbie has a crush on Stone, whom the film tacitly repudiates by characterizing him as domineering, sexist, and an idiot before having Clark and Ellen (Beverly D'Angelo) directly repudiate him as a son-in-law, prompting Debbie to finally see the light and be grateful for what she has in Rusty, who might be happy in a rut but is also dependable and loving. In the end the marriage is saved, partly because Rusty concedes to give Debbie something she desires (a trip to Paris) and mostly because Debbie decides to just let go of the other things that have been eating away at her.

Vacation got pretty terrible reviews when it was released, which doesn't surprise me even though I ultimately don't think the film is all that bad. I mean, parts of it are horrible - I couldn't even watch in its entirety the scene where the family goes for a swim in sewage thinking that it's a hot spring because it made me gag - and it's definitely crude and vulgar, but it's not without laughs. The running gag about the mysterious buttons on the fob of the rental car, each of which turns out to do something that no sane person would ever want their car to do, was funny to me (the running gag about Stone having an apparently endless repertoire of metaphors about taps at his disposal, not so much), and the sequence in which a rafting guide (Charlie Day) gets dumped by his girlfriend immediately before setting off with the Griswolds and then decides that he's going to end it all and take the Griswolds with him was kind of hilarious, albeit almost entirely because of the expression of growing madness on Day's face. I dunno. Maybe I was just in a particularly good mood when I watched it, but I really didn't hate Vacation.

Should It Have Been a Blockbuster?: I mean, We're the Millers was a blockbuster, so why not?
Posted by Norma Desmond at 5:06 PM