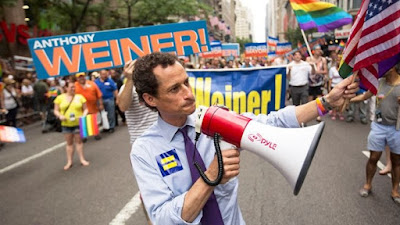 Some documentaries require a bit of luck to achieve their potential for greatness. This was true of 2012's The Queen of Versailles, in which filmmaker Lauren Greenfield had the good fortune to already be filming David and Jackie Siegel to tell a different story when the housing market collapsed, turning their tale from a lifestyles of the rich and the famous type hagiography into an epic tragedy about greed and needless excess, and it's true of Weiner, Josh Kriegman and Elyse Steinberg's film about disgraced politician Anthony Weiner. Conceived as a comeback story about a man putting his mistakes behind him and rescuing his legacy from the gutter, it instead plays witness to that man throwing his second chance away. Both documentaries were lucky to be in the right place at the right time with a camera, but they aren't great because they were lucky. They're great because their filmmakers know how to use what fortune has dropped into their laps to tell stories that are deeply compelling and fascinating.

Weiner follows Antony Weiner during his 2013 bid to become Mayor of New York, following his resignation from Congress in 2011 as a result of a sexting scandal. The idea is that he's contrite, that he made a mistake but still has value as a public servant, and that what happened was ultimately a private matter between him and his wife, Huma Abedin. This is all perfectly valid. What he does in his private life is his private life and, all things considered, a man trading racy text messages with women he never had physical contact with is pretty low on the scale of political scandals. He showed bad judgment in his personal affairs, but that doesn't in and of itself make him unfit for politics. I mean, let's be honest, how many of the men who have occupied the White House would have had a similar scandal had cell phones and social media been around during the time they held the Presidency? I'm sure there would have been entire days when JFK did nothing but send dick pics.

This opening stretch of the film adopts this forgive and forget attitude and unfolds like a story of triumph, of a man returning after a period of exile in the wilderness and succeeding in showing that his past deserves to be left in the past. Indeed, in this section, it's the media, latching on to something salacious and refusing to shift focus to things that actually matter like policy, and other politicians, grabbing for the low hanging fruit in a lazy attempt to discredit Weiner without actually having to engage him on his ideas and intentions as a politician, who come off looking bad. The other candidates bring up the years old scandal and are met with boos from audiences. Reporters use Q&A sessions to try to turn the conversation back to the events of 2011 and voters in attendance lament that all they care about is whether Weiner can do anything to improve things for them. By and large, the average person seems to take the stance that everyone makes mistakes and everyone deserves a second chance, so can't we all just move on? If you didn't know better, this would look not just like a comeback story, but a means of putting on blast all those people who would prefer to reduce politics to a matter of a politician's private peccadilloes at the expense of the actual issues that will affect the lives of the voting public. If you didn't know better, you would think that this is a story of triumph.

And then it happens.

Kriegman and Steinberg had the good luck to be there as the second scandal broke (though, judging from the events of the last couple of days, the odds are always in your favor in terms of catching Anthony Weiner in a scandal), turning this from a tale of triumph to a story of a second fall from grace and the portrait of a marriage strained to its limits. I don't know what makes this film more incredible: watching as Weiner falls back down the cliff after working so hard to climb his way up again and witnessing the ways that he and Abedin have to negotiate what their marriage is - publicly, if not privately - in the wake of the scandal, or the fact that they continued letting Kriegman and Steinberg film at all. Weiner is asked at one point why he's letting all of this be filmed and though he doesn't have an answer, it seems increasingly apparent that he has a desire to be seen, even if it's in a light that is self-sabotagingly negative. And maybe he's such a narcissist that he doesn't recognize the difference between being viewed in a positive manner and a negative manner - maybe for him it's all the same. There's plenty of evidence throughout the film of that being the case. Towards the end of the campaign, after the second scandal has broken, he decides to go on the offensive and gets into a couple of screaming matches that play out in front of cameras. These displays make him look terrible, and yet when he watches them later he seems almost proud of the way that he's conducted himself, his confidence unshaken even as Abedin is looking at him like he's insane for thinking he's done something that's in any way productive. If nothing else, Weiner is a captivating look at the vast chasm that can exist between a public person's self-perception and the way that he or she is actually seen by others.

Told at a brisk 96 minutes, Weiner is a film that never wears out its welcome and is terrifically entertaining for a story that revolves around epic hubris, public humiliation, and a marriage under siege. That it manages this while centering on a man who is deeply, deeply unlikeable makes it all the more impressive. I saw the film before the latest scandal and I've never had any particular opinion about Anthony Weiner before, so I didn't go into it with any preconceived ideas about him and he lost me as a potential figure of sympathy pretty much immediately. It happens in a talking head sequence when a voice off screen (Kriegman, I presume) asks if he was lying about his texting activities to Abedin as well as the public and he says that of course he was because "The primary person I was trying to protect finding out about this was Huma." My friend, the primary person you were trying to protect was yourself. Then, as the film carries on, it becomes apparent that Weiner is the sort of person who believes that yelling the loudest is the equivalent of successfully making your case, and that he lacks the ability to self-reflect or read the room (many reviews of this film describe Abedin as looking "sad" following the second scandal, which she does at times, but there are also moments when she shoots looks at him that are so withering that I felt cowed by them but which seem to roll right off of him). Yet you can't look away. It's a trainwreck, but it's one of the most marvelously rendered trainwrecks ever captured on film.
Posted by Norma Desmond at 8:00 AM