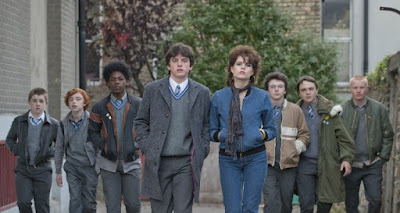 Boy and Girl meet, they fall in love, and music is made. You could argue that that's also the plot of two of John Carney's previous films, Once and Begin Again, and you would be right, but that doesn't mean that all three films are the same, or even really all that similar. Over the course of those three films Carney has played around a lot with style and with Sing Street delivers something that falls somewhere between the unadorned realism of Once and the polish of a Hollywood musical. It's a delightful and even sometimes moving film that crosses the gritty kitchen sink drama with the glamour of music videos, back during a time when music videos were considered a new and exciting art form and actually got airplay. With so much original music to its credit, fully expect to see Sing Street pop up over and again as awards season rolls around and the contenders for Best Original Song start getting whittled down.

At its heart, Sing Street is a story about a teenage boy caught in the middle of the struggles that his family is facing. Before the film itself even begins, a lot of the damage to the family unit has already been done. The parents (Aidan Gillen and Maria Doyle Kennedy) fight all the time and eventually they'll split up when she decides to leave and begin a proper relationship with the man she's been having an affair with. Brendan (Jack Reynor), the eldest of their three children, is a college dropout who no longer leaves the house, spending his days smoking pot and pontificating on matters of all variety, often spoiling for a fight with one or both of his parents. Add to that the time and place - inner-city Dublin in 1985 - brings with it an element of economic despair, and you have a situation that is ripe for drama and, indeed, as the film opens its protagonist, Conor (Ferdia Walsh-Peelo) learns that as a cost cutting measure his parents are pulling him out of the expensive school that he's been attending and sending him to the Christian Brothers School Synge Street.

At school he's bullied by students and the principal alike, but manages to find a friend in Darren (Ben Carolan) and develops a crush on Raphina (Lucy Boynton), a girl who doesn't attend Synge Street but spends a lot of time hanging around outside of it. Conor works up the courage to talk to Raphina on the pretext that he's the leader of a band looking for a girl to star in a music video with them and, when she agrees, he has to scramble to assemble the band and write a song. He gets some help from the band's first addition, Eamon (Mark McKenna), who plays multiple instruments and becomes the co-writer on many of the songs, and further help from Brendan, whom he idolizes and who knows everything there is to know about music. As Conor struggles to find an identity for his band, cycling through images based on whatever band Conor has been keyed into at the moment, he also struggles to find an identity for himself and grows closer to Raphina. Raphina already has a boyfriend and is planning to go away to London with him, but Conor holds out hope that their friendship could develop into more, just as he continues to hold out hope that his parents might somehow stay together and Brendan might rejoin the world.

The music in Synge Street acts primarily as a form of wish fulfillment, an escape for Conor from the things that cause him pain and frustration. This is most obvious with respect to his relationship with Raphina, as most of the songs he writes and videos that he directs are about charting the evolution of their relationship and taking on different personas that he thinks will make her see him in the same romantic light that he sees her. However, it's also true with respect to his relationship with his family, as those personas that he adopts for the videos are also the result of him trying to be the person that Brendan tells him he should be, and his goal when the band gets a live gig is to "fix" everything that's going wrong in his life. He envisions the show as a sort of silver bullet, an event which will bring his parents back together, bring Brendan out of the house, allow him to strike a blow against the principal who has been making his life miserable, and end with him walking into the sunset with Raphina. It doesn't work out that way, at least not entirely, but it speaks to how lonely Conor really is and how deeply he longs to have some support from the people around him.

Sing Street is a well-realized film full of rich characters (the major exception being Conor and Brendan's sister, who factors so little into the story that one wonders why Carney even bothered to create the character in the first place) who, despite the flight of fancy inherent in Conor's big fantasy sequence, remain decidedly down to earth, dealing with problems that seem ordinary enough that it disguises the machinery of the plot so that everything feels like it unfolds in a natural way. If nothing else, Sing Street is worth seeing for the music, brilliantly blending songs from the early '80s with original songs inspired by those songs which are, for the most part, pretty catchy themselves. I said at the beginning that I expect Sing Street to pop up in the conversation once we get into the awards portion of the year in the race for Best Original Song. It feels inevitable that the Adam Levine contribution "Go Now" will be a nominee, but I'd love to see the poppy "Drive It Like You Stole It" get a nod, as the sequence that plays out during that number was the highlight for me, from a film that has no shortage of highlights.
Posted by Norma Desmond at 8:00 AM