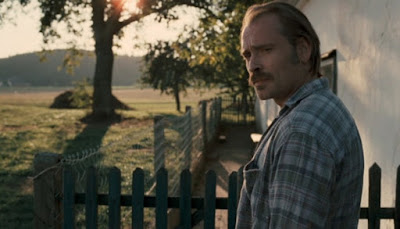 Just as a tossed stone will cause ripples that echo to the outer edge of a lake, so does one decision have after effects that reach out, changing not only the life of the person who made the decision, but the lives of people around him or her and the lives of people he or she doesn't even know. So it is in Gotz Spielmann's Revanche, a film which begins as a crime thriller about a small time hood with a plan and gradually becomes a meditation on the nature of guilt and the consequences of choices. A nominee for the Best Foreign Language Film Oscar in 2009 (ultimately losing to the Japanese entry Departures), Revanche has gone the way of many films nominated in the category, receiving a boost in visibility thanks to the nomination and then seeming to disappear from cultural conversation. For a film like Revanche, which is quietly devastating rather than flashy, such a fate was perhaps inevitable, but it's a film that holds up with time and is very much worth revisiting.

Revanche's story begins in Vienna with Alex (Johannes Krisch), a lackey for a gangster named Konecny (Hanno Poschl) who is secretly carrying on a relationship with Tamara (Irina Potapenko), a Ukrainian who has been trafficked into a brothel that Konecny runs. Having become a favorite of Konecny, Tamara is now being offered the opportunity to move out of the brothel and into a more discrete and exclusive area of the industry where she would serve Konecny's rich and powerful friends, which would result in her separation from Alex. Alex, meanwhile, is working on a plan to make a big score by robbing a bank in the village near the farm where his grandfather (Hannes Thanheiser) lives, which he believes will allow him and Tamara to run off together and start a new life. Tamara is wary of his plan, but he's certain that his plan is fool proof and goes through with it, succeeding in the robbery but botching the getaway as a result of leaving the car, with Tamara in it, parked in a no-parking zone, which attracts the attention of patrolling police officer Robert (Andreas Lust). A confrontation ensues which ends with Alex and Tamara speeding away in the car and Robert trying to shoot out the tires but hitting Tamara instead. Tamara dies and Alex flees into the countryside, to his grandfather's farm, where he makes the acquaintance of Susanne (Ursula Strauss), a neighbor who periodically checks in on his grandfather and takes him with her to church every Sunday. Susanne is married to Robert and the relationship that develops between Alex and Susanne (with only Alex aware that they share any connection besides being neighbors) is driven as much by Alex's desire to take revenge on Robert as it is on a secret plot that Susanne is hatching on her own.

Written and directed by Spielmann, Revanche is a film that builds slowly and methodically, taking time to establish the players and the stakes. The story is told in a pretty straightforward way, emphasizing character development over plot twists, and depicting the four principal characters as people of fascinating contrasts. Tamara is a woman who has had all of her illusions stripped away and tries to numb herself to her experiences through drugs, and yet alone with Alex she is capable of experiencing moments of genuine happiness and love that makes her care more about what's going to happen to him than what will happen to her. Alex is a low level thug with a lengthy history of crime behind him already, but at the beginning of the film is optimistic enough to actually believe in the picture he tries to paint for Tamara of their future together, free of the things that are holding them down in the present. Robert is a man determined to do everything exactly right and willing to accept nothing less than perfection, whether it's hitting his mark in target practice at work, or in finally succeeding in conceiving a child with Susanna. Killing Tamara doesn't just cause Robert guilt, but a professional humiliation that compounds the personal humiliation he already feels at being unable to conceive with Susanna and which leaves him unable to cope and continue doing his job. He can't handle it, even though he knows that the fault for the death ultimately lies with the person who robbed the bank and put her in danger in the first place. Then there's Susanna, a religious woman who negotiates with herself to justify an affair with Alex which could finally result in her becoming pregnant, saving her marriage and giving Robert renewed purpose in the process. In particular, Alex and Susanne make for an interesting pairing, as each is possessed of such a singular determination (he to take a life, she to create one) and their desires are so in conflict with each other. While the promise of a confrontation between Alex and Robert is what the narrative is clearly building towards, it's the quiet clash between Susanna and Alex, each in a position of power because of the knowledge they possess but each also in a position of vulnerability because of the knowledge that the other possesses, that gives the story its payoff.

Revanche's greatest asset is the way that Spielmann is able to steadily build tension throughout, making virtually every scene in the second and third acts ring with the possibility that the situation is about to explode, either by Alex making his move, Robert discovering the relationship between Susanna and Alex, or Robert putting the pieces together and wondering if Alex's sudden arrival is perhaps connected to the bank robbery and the still missing suspect. That tension is depicted in explicit ways familiar to the thriller genre, such as near misses between characters who shouldn't be in the same place at the same time, and in more metaphorical ways, such as the ever growing pile of wood that Alex saws and cuts for his grandfather. At one point he's asked how long he plans to stay with his grandfather and he replies that he'll stay as long as it takes to chop the wood his grandfather will need to get through the winter - literally, he's going to make his move once the pile is big enough; figuratively, the size of the pile represents the rage that's been building up inside of him and needs an outlet. That sense of build up is only reinforced by how Spielmann contrasts the atmosphere with the setting, playing the desolate mood off against the lush, natural backdrop, using all that open space, particularly the trail that runs through the woods, to create a feeling of claustrophobia and dread. The world that Spielmann creates in this film, and the ways that he toys with genre convention only to ultimately upend them in order to deliver a narrative that is open-ended rather than neat and tidy or black and white, is what makes Revanche so totally engrossing. This is a masterful picture.
Posted by Norma Desmond at 4:07 PM