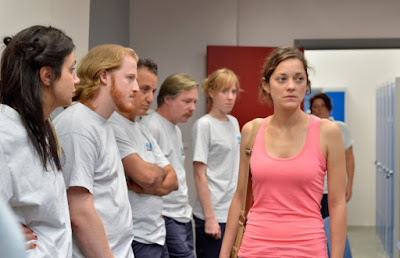 The idea of capitalism is sold to us, in part, as a system of self-determination, as a system whereby your destiny is only limited by the bounds of your imagination and your perseverance. The basis of the “American dream” is the notion that no matter who you are and no matter where you’re from, you can attain success as long as you’re willing to put the work in. For some people this is true and circumstances align in such a way that they are able to become self-made successes. For most others, however, the experience of capitalism isn’t much different from any other system, in that it ensures that the wealthy and powerful remain so, and insofar as it creates a “dog eat dog” mentality within the labor force that ensures division and stagnation in terms of upward mobility. This is increasingly true as income inequality becomes greater and greater and those enjoying the spoils of success demand bigger slices of the proverbial pie and then turn to the people at the bottom of the hierarchy and tell them that there’s only a limited amount left and certainly not enough for everyone. The fact is, the poorer you are, the less you have the luxury of choice. You might be presented with a situation where doing one thing is “morally right” but so economically impossible as to be unthinkable. In their 2014 film Two Days, One Night, the Dardenne brothers tell a story that turns on such a choice, a moral quandary put to people living on the fringes of the economy and for whom making the wrong choice will mean slipping into financial oblivion. Like all their films it is observational rather than judgmental, and it is so deeply engaging that you will be riveted from beginning to end.

Sandra (Marion Cotillard) is a factory worker who has been on a leave of absence from work for some months as she struggles with depression. With the help of her husband, Manu (Fabrizio Rongione), she has been working her way out of it, but now that she’s ready to return to work, the manager of the factory decides to put her continued employment to a vote among the rest of the workers, telling them that either Sandra can come back or the company can pay everyone else a bonus of €1,000, but not both, resulting in all but two of her co-workers voting to receive the bonus. When she goes to talk to the manager to plead her case, he agrees to hold another vote on Monday, giving her the weekend to convince her co-workers to vote to allow her to come back to work. Over the course of the weekend she goes from door to door and tries to persuade enough people to her side so that she’ll have a majority of the vote.

Two Days, One Night tells a simple story. It’s a basic “quest narrative” that unfolds without frills or plot contrivance. The drama of the story comes from the way that the film explores Sandra’s depression and how her fragile emotional state is affected by the fact of the original vote, stripping away any feelings of self-worth that she has left as she’s reduced to a beggar going door to door with her hat in her hand, and how it frames the interactions between Sandra and her co-workers so that you can see both sides. She needs her job so that she and Manu can support their family, but she feels bad about asking her co-workers to give up the bonus. For their part, her co-workers don’t dislike her, but they need the bonus. Like her, many of them are living on the razor’s edge of poverty, surviving from paycheque to paycheque, and the bonus would allow them some much needed breathing room, so that even though they sympathize with her plight, they can’t bring themselves to vote against their own self-interest. They didn’t vote against her, they voted for themselves and their families. Some of them have reasons that are, objectively, better than others (you feel for the man who begins to cry as he tells Sandra that he’s his family’s sole supporter and just can’t vote to give up the bonus; you don’t feel all that sorry for the woman who’s doing renos to her house and needs the bonus to finish them), and there’s a complex range of reactions to what Sandra is doing, with most reacting with discomfort, some with anger, some refusing to engage Sandra at all. None of these people created this situation, but now they’re all having to suffer through it.

What makes the film so extraordinary, though, is that it uses its final act to shift the narrative. Up until this point, Sandra has been at the mercy of forces beyond her control and has struggled to keep her head above water in the face of it. The act of going door to door is often humiliating – she gets several people to agree to vote in her favor, some of them asking her forgiveness for not having done so in the first place; but she gets a lot of people refusing, too – but, at the same time, it becomes a process of empowerment. With each visit, she becomes a little more confident in her right to do what she’s doing, to fight for her right to work and contribute economically to her family, and through the course of her performance Cotillard begins to stand just a little straighter, hold eye contact just a little longer, and speak more plainly and directly about why she deserves a chance to continue working. She becomes a stronger person by the end and then the film presents her with a new test, one which forces the audience to question its own sense of right and wrong, and which provides Sandra with the agency and power that circumstance had previously made it impossible for her to seize.

The film ends by putting the ball squarely in Sandra’s court and letting her determine what happens next. It’s a bold choice that feels more perfect the further you stand away from it, the more you consider the three types of endings you would usually see in a film like this: the feel good ending that strains credibility but feels earned due to how profoundly we’ve come to feel for the protagonist; the downer ending which feels realistic but leaves a bitter, despairing taste; the non-ending in which the screen fades to black just as Sandra is about to get the results of the vote, relieving the filmmakers from having to make a decision. All of those endings would leave Sandra in essentially the same position she was in at the beginning, as someone whose fate is decided by outside forces. What the Dardennes do instead not only allows her a moral victory, but makes her the master of her own fate. They set her free and it feels like a revelation, which is what makes Two Days, One Night feel so exhilarating and extraordinary.
Posted by Norma Desmond at 8:00 AM