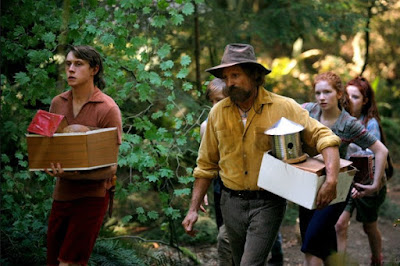 One of life's great ironies is that it's possible to be wrong even when you're right. The father in Captain Fantastic is right when he argues that he's done right by his children, raising them to be bright, self-sufficient, capable of deep and independent thought, and possessed of practical and artistic skills, and yet those outside the family are right when they argue that, at best, he's left his children unprepared to exist in the world as it is and, at worst, he's behaved in a way that's abusive and has put his children in danger. He's right when he argues that people have become over-medicated to serve the interests of big Pharma, yet he's wrong in his belief that all medications in all circumstances are unnecessary and that a genuine and very serious mental illness can be cured simply by taking that person off the grid and living as close to nature as possible. Written and directed by Matt Ross, Captain Fantastic works as effectively as it does because it refuses to see its situation in black and white, choosing instead to exist in the grays that allow it to see its protagonist as a man of noble ideas and something akin to a militant cult leader.

The family in Captain Fantastic lives deep in a forest in the Pacific Northwest, hunting for some of their food, growing the rest, living without electricity or running water, and building most of what they need for themselves with their own hands. Every once in a while the father, Ben (Viggo Mortensen), will go into town, where he has an arrangement with a general store owner to sell his handmade goods (such as bird houses) so that he can use the money to buy whatever necessities he and his family are unable to produce for themselves at their homestead. Self-sufficiency is the rule by which the family - which includes children Bodevan (George MacKay), Kielyr (Samantha Isler), Vespyr (Annalise Basso), Rellian (Nicholas Hamilton), Zaja (Shree Crooks), and Nai (Charlie Shotwell) - lives, and in his capacity as head of the household Ben is not just father, but also teacher, and something resembling the leader of a band of guerrilla fighters, as in addition to teaching the kids practical skills and ensuring that they receive a thorough education through books, Ben also trains them in the art of hand-to-hand combat so that they might be prepared if and when they need to fight, be it against the government or some other force.

Missing from the picture is the kids' mother, Leslie (Trin Miller), who has been absent for some months as a result of Ben finally giving in and agreeing to send her to a hospital near her parents for treatment for her bipolar disorder. On one of his trips into town, he makes a phone call and learns that Leslie has killed herself and is informed by his father-in-law (Frank Langella) that if he dares to show his face at the funeral, he'll be arrested. Undeterred and unwilling to let his children miss the opportunity to say goodbye to their mother, Ben loads the kids into the family's bus and head out for a road trip to New Mexico, where Ben's intention is collect Leslie's body so that it can be laid to rest in the way that she wanted. Along the way, however, things happen which force Ben to confront and reconsider the choices that he has made both in his marriage and in raising his children and he's left to wonder if the adventure that he and Leslie embarked upon so many years ago was really something that they both wanted or whether he has simply imposed his will on those around them to their detriment.

Captain Fantastic works in large part because of its refusal to portray Ben as either hero or villain. Although his parenting style and lifestyle might be unconventional, it's hard to argue against the value of them when confronted with the kids, who are all well read, demonstrably capable of independent thought, physically fit, possessed of a keen understanding of the natural world, and able to take care of themselves in the absence of the comforts that most of us take for granted. In an apocalyptic, post-society scenario, they would be the only people who would survive for any significant length of time. Socially, however, the kids are at sea when they interact with anyone who has lived outside of their insular bubble, as teenage son Bodevan discovers on the road trip when he meets a girl and realizes with growing horror that he has absolutely no idea how to relate to her because he has no familiarity with current American culture. Living off the grid has been a benefit to the kids in certain ways, but it has also left them completely unprepared to live in the world as it actually is and for Bodevan, in a minor way, and Rellian, in a major way, it has ceased to be a way that they actually want to live. That Ben treats that as a betrayal reveals that for all his talk about how he wants his children to be independent and able to take care of themselves, what he actually means is that he wants them to be independent and take care of themselves within the confines of a situation that he has created and that he is ultimately in charge of.

While Ben is not the monster that his father-in-law wants to portray him as (and, objectively, his father-in-law, despite some of the things that he does, is not the monster that Ben thinks he is either), he's not really innocent of his father-in-law's accusations either. When he says that Ben's parenting is abusive, he's not entirely wrong insofar as Ben has taken his philosophy to such an extreme that he seems incapable at times of recognizing that even his children are still just children and sometimes need help in order to accomplish something (like, say, climbing the rest of the way up a rock face after breaking your hand) and that providing them with that help when they need it isn't coddling them and stifling their ability to be self-sufficient. Captain Fantastic is determined to see things from both sides, to both admire Ben as a man who not only possesses principles but has the stones to actually go out and live by them, while still being able see him as the pompous sort of person who will dismiss everything that doesn't accord with his own beliefs and is utterly exhausting to be around because he sees everything as an opportunity to lecture you about how you're doing things wrong while he's doing them right. In the hands of Mortensen, he's likeable and insufferable, often at the same time.

Captain Fantastic is a really wonderful movie, one that is thoughtful and moving and at times surprisingly funny. My only real qualm with the film is that Leslie - who only appears briefly as a figure imagined or remembered by Ben - is too indistinct a figure for someone whose absence is so central to the story's premise. We learn a few scattered facts about her (she suffered from bipolar disorder, she was a lawyer before she and Ben retreated into the wilderness), but we never get any real sense of who she was as a person, nor does she even really register as an absent presence in the family. Except for a comment here and there from the kids about missing her, there doesn't really seem to be a void in the family when we meet at them the beginning of the film and there's no real sense of how Leslie fit into the family ecosystem. This puts the character in the strange position of being in both central in terms of the narrative and an afterthought in terms of her actual importance. Ultimately though this is only a minor thing, as the character of Ben is so fascinating and well-drawn (the kids are sort of hit and miss in that respect, as Bodevan, Rellian, and Zaja all emerge as distinct, while Kielyr, Vespyr, and Nai are far less so) and so fantastically played by Mortensen that he holds the narrative all on his own. Captain Fantastic is one of the year's indie gems.
Posted by Norma Desmond at 4:49 PM